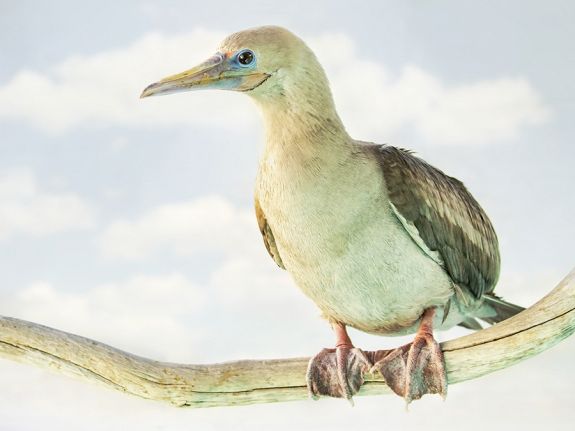 Sula is an Aquarium animal ambassador and makes appearances at meet-and-greet sessions.

Red-footed boobies are found globally in subtropical and tropical coastal areas including oceanic islands. The Galapagos Islands have one of the largest populations.

These birds live in colonies near lagoons and coral reefs and build their nests in tree tops or low shrubs.

Sula sula is the smallest species of booby. This species has a tapering, long, blue-and-pinkish-colored bill with serrated edges to help catch and eat prey. The external nostrils close when plunge-diving, with secondary nostrils on each side of the mouth that are covered by skin when it dives. The facial skin is typically bare. The booby’s eyes are beside the bill on each side of its head. This bird has strong neck muscles, long pointed wings that are rather far back on the body, and a wedge-shaped tail. It has short, strong legs with large, webbed, red feet set further back on the body. Extensions of the lung passages have developed into a series of air sacs which make the bird very buoyant. This bird’s underside is typically beige or white with darker coloration on its back. The feathers are continuously molted, except during breeding season, and are renewed one or two times yearly.

Red-footed boobies feed on fish. They may travel up to 93 miles (150 kilometers) in search of prey. They plunge-dive to catch their prey.

Red-footed boobies reach sexual maturity at age two to three years. Breeding is not seasonal. They typically mate once every fifteen months depending on the food supply. Being highly social birds, they perform ritualized courtship and mating behavior by showing off their wings and feet and display posturing. “Bill-up-face-away” posture is displayed. Males display with their beaks, tails, and wings facing upward and call for mates. Once a monogamous pair mates, they return to the same nest year after year. After mating the female lays one egg. Incubation lasts from forty-one to forty-five days, with the young fledging as young as ninety-one days. If food is scarce, for instance during an El Niño, fledging may occur at 139 days or more.

Red-footed boobies are colonial and highly social birds. They do not migrate. They are typically active during the day, but have been known to feed at night when squid come to the surface of the ocean.

Plumage is molted continuously so the bird will have constant flight capability. Plumage helps to maintain body temperature. Long, pointed wings help the bird to fly in high winds by alternating gliding and powerful flaps.

Red-footed boobies may live up to forty years.

The International Union for Conservation of Nature (IUCN) lists the red-footed booby as a species of Least Concern.

This bird faces threats from habitat loss, including deforestation, and overfishing decreasing their available prey.

Sula is the name of the Aquarium’s red-footed booby, and her name is also part of this species’ scientific name. Sula is one of two red-footed boobies known to be living at a zoo or aquarium. They get their common name from their red feet and have blue and pink colored beaks. In the wild, this seabird species faces threats from humans overfishing their sources of food and coastal development. They live in colonies and nest in coastal trees and shrubs near coral reefs and lagoons. Also, some studies have indicated their droppings can help the productivity of coral reefs.