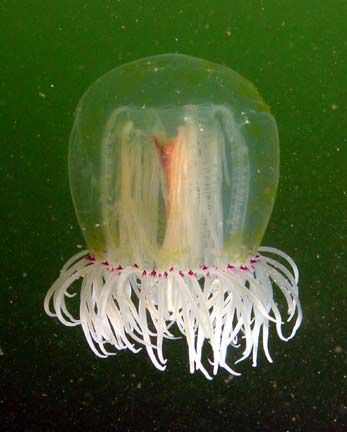 Although they may be seen in the open ocean, this jelly species usually inhabits coastal nearshore waters, especially in shallow bays among eelgrass beds.

The bell of the red-eye medusa is almost spherical. It has about 100 evenly spaced extendable tentacles around the bell margin. As with many hydromedusae, red-rimmed eyespots (ocelli) are located at the base of the tentacles. Four unbranched radial canals contain 15 to 25 pairs of lateral diverticula (blind sacks). Finger-like gonads hang down from the subumbrella surface under the radial canals near the juncture of the gastrovascular cavity with the radial canals, in four groups. A distinguishing feature of hydromedusae is the velum, a muscular flap of tissue surrounding the margin of the bell.

The bell is transparent with white parts, but the gonads and some other internal organs may be yellow, yellow-brown, reddish-brown, or purple. The eyespots are conspicuous dark spots at the base of the tentacles.

This jelly eats caprellid amphipods (skeleton shrimp) and other small crustaceans that are common on eelgrass. It also preys on bottom-dwelling worms and crustaceans and small plankton it finds in upper waters when foraging at night.

While it is known that adult red-eyed medusae are either male or female, according to the World Registry of Marine species (WORM), polyps of the red-eyed medusae have never been found. The polyp stage of this species is either very small or unknown, and the medusa may develop directly from a planula larva.

When actively moving, this jelly can shorten its tentacles to the point they become almost invisible and extend them their full length when the jelly is drifting.

To stir up zooplankton near the seafloor, the red-eyed medusa uses a “hopping” motion up and down followed by a slow drift downward to capture the prey with its tentacles.

Stings of individual jellies are mild; however, those suffered during encounters with aggregations of this species can be painful and serious, although not life threatening.

The digestive process in hydromedusae is complex. The radial canals pass products of digestion through the mesoglea, the gelatinous material between the exterior and interior bell layers, to a ring canal that lines the bell margin. The ring canal is in turn connected to canals in each of the hollow tentacles. Digestion can take place throughout this system of canals, hence the term gastrovascular cavity for the complete structure. Partially digested food is taken up throughout tissues in the gastrovascular cavity for complete intracellular digestion.

Many jelly species are increasing in numbers, but the population of red-eyed medusae is declining. The exact cause is not known, but it may be due to loss of habitat. This species prefers an eelgrass bed as habitat and these beds are disappearing as a result of coastal development and pollution from urban, agricultural, and industrial runoff.

To stir up zooplankton near the seafloor, the red-eyed medusa uses a “hopping” motion up and down followed by a slow drift downward to capture the prey with its tentacles.

This jelly’s common name, red-eyed medusa, comes from the red-rimmed eyespots (ocelli) at the bases of its tentacles. Some jelly watchers consider the red-eye medusa the most beautiful jelly found along the West Coast, where it inhabits nearshore waters and bays among eelgrass. This jelly is a hydromedusa, not a Scyphozoan (true jelly). During the day it spends most of its time near the sea floor, moving closer to the water’s surface when darkness falls to seek prey.