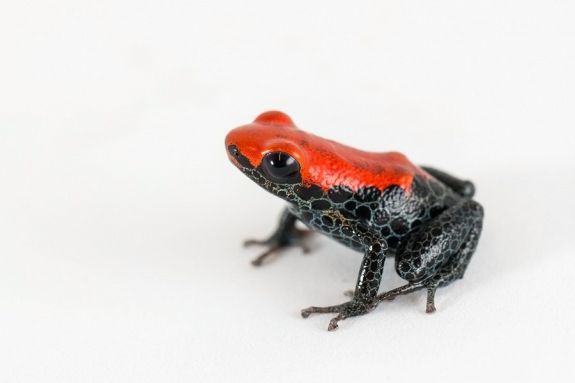 Our Red-Backed Poison Dart frogs were captive-bred. They are fed a diet that includes crickets, wingless fruit flies, meal worms, and earthworms. None of these foods contain the chemicals that cause them to develop toxins.

Native: Ecuador and Peru
From the Iquitos and Yurimaguas Region, Loreto, northeastern Perú, and from two sites in Ecuador.

In the wild the Red-backed Poison Dart Frog’s diet includes ants, fruit flies, termites, young crickets, and tiny beetles. It is uncertain whether ants or beetles are the source of the chemical substances from which this poison dart frog derives the toxin that is stored in glands just under the surface of the skin.

Red-backed Poison Dart Frogs have a slender body with well-developed adhesive disks at the tips of the toes on all four of its limbs. This species has many color variations and patterns; however, all have a colored back that in spite of the common name, red-backed, may be fiery orange. Legs are black with an overlay of a sky-blue or cobalt mesh pattern. Eyes and belly are black.

This terrestrial frog inhabits lowland areas of primary (undisturbed) and secondary (degraded) tropical rainforests. Its ground habitats include the leaf litter on the rainforest floor and the cavities between tree roots. Usually a ground-dweller, the Red-Backed Poison Dart Frog does climb tree trunks when trying to escape from a predator.
Elevation: sea level to 656 feet (200 meters)

In the breeding season males attract females and ward off other males by calling to advertise how fit they are. Courtship includes stroking and licking an attracted female. The female stamps her feet to indicate that she is ready to mate. The male then escorts her to a site he has selected. The male climbs onto the female’s back, grasping her with his front limbs. He fertilizes the eggs as she lays them, but may do so after they are laid in a damp place, usually leaf litter on the rainforest floor. After the eggs hatch, the tadpoles wiggle onto the male’s back and he carries them, usually one by one, to a pool of water. Often this is the small amount of rainwater trapped in the leaves of bromeliads growing close to the ground on a tree trunk or one that has fallen to the ground. The female visits the tadpoles at intervals, feeding them unfertilized eggs until they can feed themselves.

Over the next several weeks, the tadpoles metamorphose into froglets. Their gills are grown over by skin, eventually disappearing to be replaced by lungs. Teeth and rear legs develop. The head becomes more pronounced and the body elongates. Front legs develop and the tail becomes a stub. At ten to twelve weeks old, with metamorphosis complete, a young frog or froglet leaves the water for a land habitat. During metamorphosis the tadpole will develop back legs first and then front legs. At around six weeks of life the mouth starts to widen. Sometime around ten weeks the froglet’s eyes start to bulge out and the tail begins to shrink and eventually disappear. When the lungs finish developing the froglet makes its way onto the land and becomes a frog.

During the day, the Red-backed Poison Dart Frog constantly hunts for food as it hops along the leaf-littered rainforest floor. Once its keen vision spots prey, the frog zaps out its long, sticky tongue to slurp in an unsuspecting insect.

This species’ bright orange or red-colored back serves as a warning to predators not to eat it. With its small size and slim build, the Red-Backed Poison Dart Frog is able to squeeze into very tiny spaces.

Currently large populations are widely distributed in rainforest areas where there are still extensive patches of suitable habitat. This species does have a major threat—illegal poaching for the international pet trade. The Red-Backed Poison Dart Frog is listed as CITES Appendix II in an effort to minimize this illegal practice. CITES, the Convention on International Trade in Endangered Species of Wild Fauna and Flora, is an international agreement among governments. The United States is a CITES Party. CITES Appendix II requires that the government where the species is found must issue a permit before export. Captive breeding programs in several countries are now the major source of Red-Backed Poison Dart Frogs.

The International Union for Conservation of Nature (IUCN) Red List of Threatened Species has listed the Red-Backed Poison Dart Frog as Least Concern since 2004; however, it states that updated field studies are needed.

Climate change: Many scientists believe that over time global climate change and rainforest degradation together could lead to increased temperatures and changing rain patterns in the Amazon basin. As a result, the region’s forests, water availability, and ultimately the animals and plants that currently inhabit the rainforests would be affected. The Red-Backed Poison Dart Frog has been able to adapt to living in degraded rainforests and habitat where there are continuing human activities. Given enough time, this species may be able to adapt to changes in temperature and water availability resulting from climate change.

The “poison” of Red-backed Poison Dart Frogs, although moderate in toxicity, ranks second in strength among the sixteen species in the genus Ranitomeya. The Variable Poison Dart Frog (R. variabilis) ranks first.

This species has a remarkable way of getting water. The long, curved leaves of bromeliads overlap at the base, forming a tight little bowl—a perfect water tank for a frog. The leaves also act as gutters to collect rain, and the tank holds the water. The largest bromeliads hold up to two gallons of water.

The Red-backed Poison Dart Frog, a terrestrial frog, gets its common name from the splash of color across its back that can vary from scarlet red to fiery orange. Less than an inch (2.5 centimeters) in length from snout to vent, this colorful frog is small enough to be included in the group of frogs called “thumbnails.” Primarily a ground dweller in lowland areas of the upper Amazon of Peru and Ecuador, it does occasionally climb trees. Its poison is moderately toxic.