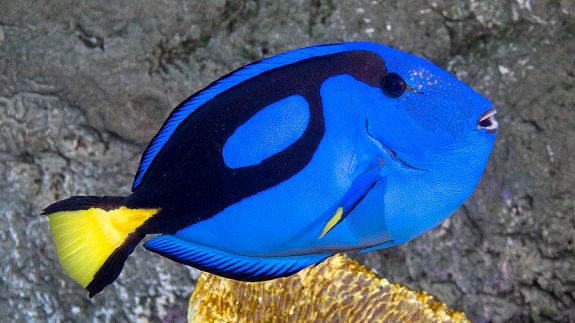 The Aquarium has palette surgeonfish in Shark Lagoon, Tropical Reef habitat, and other exhibits in the Tropical Pacific Gallery.

These fish are found in the Indo-Pacific Ocean, from East Africa to Kiribati, north to southern Japan, south to the southern Great Barrier Reef, Samoa and New Caledonia.

This species has an oval-shaped, laterally compressed body with a pointed snout-like nose and small mouth. It has a bright blue body color, and iridophores, a type of chromatophore, contribute to the coloration. Adults have dark blue narrow lines on the dorsal side of body that darken, turning black near the tail. These fish are bright yellow on the caudal and pectoral fins extending in a “V” shape from the caudal fin to just behind the caudal spine. Juveniles are bright yellow with blue spots close to their eyes. The dorsal and anal fins are tipped in light blue. Their color changes to blue as they mature. A caudal spine on each side of the caudal fin contains toxins that can cause debilitating pain to small predators and pain and uncomfortable irritation to humans. Small scales cover their body.

This fish is an omnivore that feeds on zooplankton and algae.

Breeding takes place during the cooler months, depending on location and water temperature. Breeding activity is most concentrated from December to June in the Pacific. Broadcast spawners, male and female palette surgeonfish gather in spontaneous breeding groups. The group begins swimming upward, releasing their eggs and sperm at the crest of their upward movement. External fertilization takes place in the water, with the currents dispersing the gametes and fertilized eggs. Each of the eggs contain a drop of oil for floatation. Females may release up to 40,000 eggs during each spawning event. Fertilized eggs will hatch between twenty-five and twenty-eight hours after fertilization. The larvae will develop quickly. Sexual maturity is measured by size and not age. Males typically reach sexual maturity around 4 inches (11 centimeters) in length and females at about 5 inches (13 centimeters).

In the reef, palette surgeonfish school for protection. Males may fight other males by circling each other while displaying their caudal spine and attempting to slash or slashing their rival. Their blue coloration may change during intense encounters. The standing of this fish with other fish on the reef may be impacted by their caudal spine. The most dominant fish often have the largest breeding territory. Juveniles will hide in corals when frightened. The fish will secure its position within the coral by extending its caudal spine into the coral, making it nearly impossible for a predator to pull the fish out. These fish may also “play dead” when spotted by a predator by lying on their side without any movement.

Palette surgeonfish use their caudal spines to anchor themselves between coral branches to avoid predators.

A palette surgeonfish’s typical lifespan in the wild may be more than thirty years, with the average being twelve to fourteen years.

Listed as a species of Least Concern by the IUCN.

The palette surgeonfish is known by many names, including palette tang, regal blue tang, and blue tang. This species is found in and around the reefs in the Indo-Pacific. Typical of surgeonfish, this fish sports weapon-like spines at the base of its tail. These oval-shaped fish are bright blue in color with yellow on their tails and dark blue body accents. These popular aquarium fish are listed as a species of Least Concern by the International Union for Conservation of Nature (IUCN).