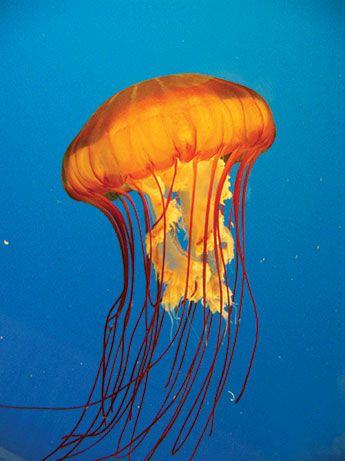 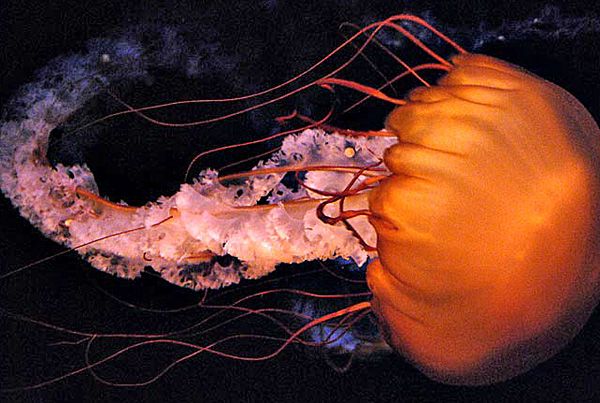 Aquarium of the Pacific, J. Leonard

The Aquarium habitat for west coast sea nettles is in the Northern Pacific Gallery. Our aquarists have successfully cultured this species for many years. It takes about three months to rear the jellies from polyps to ephyrae, the adult stage. We exhibit our Aquarium of the Pacific-grown jellies and also share them with other aquariums.

Commonly in coastal waters of California and Oregon. Less common west to Japan, north to the Gulf of Alaska, and south to the Baja Peninsula.

Pacific sea nettles live near the surface of the water column in shallow bays and harbors in the fall and winter. In spring and summer they often form large swarms in deep ocean waters.

The bell, or medusa, of Pacific sea nettles is dish-shaped, with shallow scallops (lobes) around the margin. Twenty-four long, ribbon-like, thin tentacles stream from the bell’s margin and four long, lacy, pointed oral arms spiral out counterclockwise from the center of the bell. The bell is covered with warts that contain nematocysts (stinging cells).

The bell is yellowish or reddish-brown with a darker margin. There may be a lighter star pattern with 16 to 32 rays on the exumbrella, the outside surface of the bell. The tentacles and oral arms are very dark reddish to yellowish-brown in color.

These jellies are carnivores, feeding on other jellies and a variety of zooplankton including larval fishes and eggs, comb jellies, other jellies, and pelagic snails.. As they move through the water with both oral arms and tentacles extended, their tentacles stream below, above, and alongside the bell creating a large surface area with which to capture prey. When physical contact is made with a prey item, the nematocyst is triggered, causing the nematocyst cell to burst open. The cnidae explodes from the cell and discharges its toxin into the prey, paralyzing it. The trailing tentacles retract and transport the food up the tentacle to the gastric cavity where digestion occurs. Large prey is partially digested on the oral arms before being transported to the gastrovascular cavity. Once the prey has been transferred, the tentacles extend again to become fishing lines once more.

Sea nettles are broadcast spawners; they do not fertilize internally. The fertilized eggs hatch in the water column as round or oval ciliated larvae, the planulae. The planulae change to a pear shape in two to three hours, swimming freely for a time while searching for a shaded and rough area to which to attach their posterior ends to become stationary planocysts.

The planocysts go through an asexual reproductive process developing into tentacled polyps called scyphistomes. Either budding off of non-motile clone scyphistomes occurs or if environmental conditions are suitable, a procedure called strobilation begins. In strobilation, miniature medusa-like structures called strobilia are formed on a stalk, one on top of the other like a stack of dinner plates with the most mature on top. The strobilia bud off as individual ephyra (young jellies) that develop marginal lobes, sensory structures, tentacles, elaborate oral arms, and finally the bell shape of the adult male or female medusa, the form in which sexual reproduction occurs.

When sea nettles ‘swim’ the shape of their bell changes markedly from the shape of an umbrella to flat as the bell contracts and expands due to action by its coronal (circular) and radial muscles. The coronal muscles act first, drawing the umbrella inward and downward. Then the radial muscles cause it to bend further. There is an initial backward thrust of the umbrella on the water, followed by an outward jet of water with each contraction. There is sufficient drag on the bell to virtually stop the jelly in the water at the end of recovery. The jelly then accelerates again during the next beat. In the resting state at the end of the “swimming” stroke, the jelly’s bell is flattened and the lobes give it the appearance of an eight-pointed star.

Sea nettles do not see images but are able to differentiate between light and dark using small pigmented structures on the bell or tentacle base called “eye spots” or ocelli. They maintain their balance and orientation to the ocean bottom and surface with statocysts, vesicles that contain mineral salts that stimulate sensory cells in response to the jelly’s movement

These sea jellies have about six month’s life span with some living to one year of age. In protected environments such as aquariums they have lived for 18 months due to the absence of predators and availability of an adequate food supply.

This species is preyed on by sea turtles, to ocean sunfish, Mola mola, and the seabird Northern Fulmar, Fulmarus glaciatis.

Pain caused by the sting of a Pacific sea nettle is similar in intensity to that of a bee sting. It does not have serious effects except in those individuals who are sensitive to the toxin.

Pacific sea nettles have a symbiotic relationship with juvenile cancer crabs that hide in the inside surface of the jellies’ bells. It is believed that the tattered appearance of some jellies is caused by the crabs nibbling on the jelly.

Pacific sea nettles (also known as West Coast sea nettles) are in the class Scyphozoa, that of the jellies called true jellies. The genus name of sea nettle jellies, Chrysaora, comes from Greek mythology. Chrysaor, reportedly a giant, was the son of Poseidon and Medusa. His name translates as ‘golden falchion’. A falchion was a commonly used curved fighting sword that could cut through armor, a reference to the stinging ability of these jellies. The West Coast sea nettle’s species name, fuscescens, means dusky or dark referring to the dusky color of the nettle’s bell.