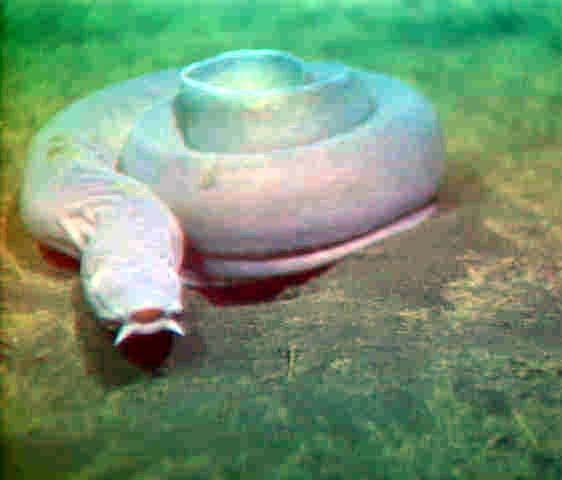 In wait for prey. | Courtesy of NOAA 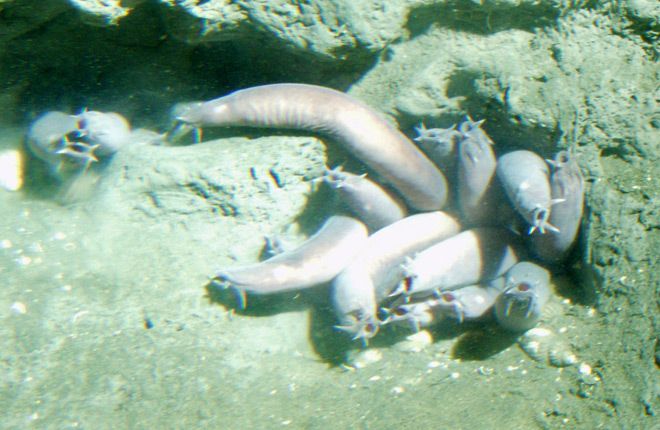 Pacific hagfish are not currently exhibited. This information is supplied for use as a reference.

Bottom dwellers, Pacific hagfish are typically inhabits temporary burrows in mud and other soft substrate at depths of 18-900 m (584-2970 ft).

Pacific hagfish are long and tubular in shape, resembling an eel. They are cartilaginous fish that have a flexible skeleton. They have a relatively short head with a pointed snout and barbels around the single rostrum and mouth. They have no true fins but do have a very long dorsal finfold that is continuous to the broad and rounded caudal finfold, and a very long ventral finfold extending from the last gill pore to the anus. They have 10-14 gill pores on the anterior portion of the body. They do not have true jaws. Their mouth is a ring of sensitive short tentacles. Their tongue has two pair of rasps that are used for pulling and tearing. Skin pores on both sides of their body through which slim is ejected run the length of their degenerate lateral line.

The coloration of these fish can be tan, gray, dark brown, brownish-red, or tinted with blue or purple. Their ventral side is lighter color.

Unique vertebrates, hagfish are able to absorb nutrients through their skin. They prefer polychaete worms for a meal but also prey on small invertebrates and are scavengers of dead and dying marine life. Once a firm hold is established on the prey, the hagfish ties and untied a knot within its own body to create a ripping force. It then burrows into dead carcasses exposing its skin to the nutrient-rich decomposing matter while eating away at the dead animal’s inside. It leaves the skin and bones behind. Due to their slow metabolism, hagfish can survive for several months without eating.

Not a great deal is known about the reproduction cycle of Pacific hagfish. Most information has been derived from laboratory studies of fish caught in commercial fishing operations. .Sexes are separate and fertilization is external. A mature female produces between 20-30 eggs per reproductive cycle that average 5mm (0.2 in) in length. There is no larval stage. Hatchlings are 6-8 cm (2.4=3.1 in) in length and are fully functioning miniatures of adults.

The most distinguishing hagfish behavior is its ability to produce copious amounts of mucilaginous slime nearly instantaneously. Pores along the degenerate lateral line secrete the slime as a defense mechanism. As the slime contacts seawater, it rapidly expands into a sticky gel that can suffocate an attacker or foul mechanical equipment. Another unique a hagfish behavior is its ability to tie a knot in its body and then slide in and out of the knot. They can use this behavior to bury into a carcass to elude predators, gain leverage to tear off pieces of flesh, or clean slime from itself.

A hagfish usually swims slowly along the seafloor in a snake-like fashion although it may have occasional bursts of speed.

The ability of a hagfish to tie itself into a knot and then untie is believed have several purposes. It may pull its body through the knot so as to remove itself from its own slime that would otherwise suffocate it or the knot can be used as leverage for tearing meat from a carcass.

It is estimated that hagfish may live 40 years in the ocean and 17 years in a protected environment such as an aquarium.

The Pacific hagfish is listed on the IUCN Red List as “Data Deficient, More Research Needed” to quantify the impacts of fishing on the population of this species. The Red List states: “This species is only known from the northeastern Pacific where it is heavily targeted in at least half of range for the Asian eel-skin leather market, (wallets, leather, and boots). Reported landings for this species are mixed with the black hagfish (E. deani) and have been quite variable in both total catch and effort over the past 20 years. The reasons for the variability in catch and effort trends are not well understood.”

These fish are affected by the trash and chemicals that we put into the ocean. Pacific hagfish are a crucial part of the cycle of life as they eliminate dead and dying organisms. There could be a significant impact on the ecosystem should there be a large scale removal of hagfish.

The inshore hagfish, Eptatretus burge, is listed on the IUCN Red list as Near Threatened. This hagfish species is commonly found in the western North Pacific off the coasts of southern Japan, South Korea, northern, and northwestern Taiwan. In these geographic locations hagfish is a native (endemic) species. They are very heavily fished in the China Sea for their skin and for food. Approximately five million pounds of hagfish meat is eaten yearly in Korea.

In areas where there is considerable bycatch discarded by fishermen, or falls of marine mammals such as whales and sea lions, hagfish may play a significant role in recycling and maintaining the seafloor by savaging and burrowing through the substrate.

Although hagfish was a traditional food item in Japan and Korea, harvesting of the fish for their skin to be used as soft leather did not start until World War II brought about a shortage in Japan for leather from land animals.

Research is being done on hagfish slime in which the mechanical properties of threads made from the slimy mucus are being studied. The threads are both strong and stretchy, features that may lead to development of superior new materials.

Pacific hagfish are among the very first arrivals at a whale fall in deep waters off the California coast. Called mobile scavengers, they feast on the soft tissue of the whale carcass/.

Pacific hagfish, also known as the California hagfish and slimy eels, are eel-like primitive fish little changed in the past 330 million years of fossil records. They do not have jaws, a stomach or jaws. Their eyes are rudimentary and their vision is poor but they do have good senses of smell and touch. These bottom dwelling fish prey on polychaete worms and small, small invertebrates and are scavengers of dead or dying animals. They are mobile scavengers at whale falls among the very earliest arrivals at a new fall. Hagfish are known for their ability to produce copious amounts of slime when disturbed, hence the common name, slime eels.