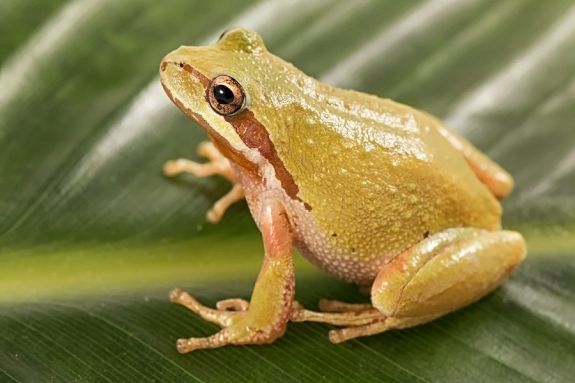 Our frogs were donated to us by a herpatology scientist who is studying the species.

The Northern Pacific Tree Frog is a small frog with a large head, large eyes, and what is described as a slim waist. It has long, slender legs and limited webbing between the toes. The moist skin is covered with small bumbs. A distinctive wide black or dark brown stripe called the eye stripe is usually present in both sexes. This stripe runs extends from the nostrils across the eyes and back to the shoulder.

As is true in many frog species, coloration is variable, resulting in many morphs. The most common background colorization of these frogs’ back and legs is green or brown, but coloration can be tan, gray, reddish, or cream. The belly is creamy with yellow underneath the back of the legs. Patterns include stripes and spots of various sizes. While the actual body color and the dark eye stripe do not change, the body color can quickly change from dark to light, and dark markings on the back and legs can vary in intensity or disappear in response to environmental conditions. Males have a dark patch on their throats that stretches out when the male is calling.

In non-breeding season, these frogs are nocturnal, feeding at night and hiding out during the day; however, when breeding, they feed night and day. They are primarily ground-feeders eating a wide variety of invertebrates, especially those that fly. They use their keen eyesight to locate prey that they catch by shooting out a long sticky tongue. Young tadpoles are suspension feeders, filtering out and eating a variety of prey including algae, bacteria, protozoa, and organic and inorganic debris in the water.

In the wild males, and females are believed to become sexually mature at about one year of age. The breeding season is location dependent but it usually is sometime between November and March. Adults migrate, often in groups, to areas where there is water. Territorial males advertise their fitness to females and competing males by calling day and night. They first defend their territory with encounter calls and then by physical encounters in which they butt and wrestle with other males.

The male fertilizes the eggs externally as the female is laying them in the water. The females lay 400 - 750 eggs in small, loose, irregular clusters of 10 - 80 eggs each. She attaches a cluster to sticks, stems, or grass in quiet shallow water. The adults abandon the eggs, returning to their terrestrial habitats.

Tadpoles hatch in two to three weeks. Their metamorphosis into froglets takes about two and a half months. During this time their gills are replaced with lungs, rear legs and then front legs develop, and the tail becomes a stub. Tadpoles metamorphose in about 2 to 2.5 months, generally from June to late August. In summer, there are often large congregations of new froglets along the banks of breeding pools. Froglets leave their pond habitat soon after transformation, dispersing into adult habitats.

During wet weather, these tree frogs move around in low vegetation. In locations at low elevations where temperatures are more moderate, frogs may be active all year. At colder or warmer locations, frogs avoid temperature extremes by hibernating in moist shelters such as dense vegetation, debris piles, crevices, mammal burrows, and even human buildings.

When disturbed, these frogs typically hop a great distance or jump into the water and swim into vegetation to hide. Sometimes they use their cryptic body color and avoid predation by remaining motionless.

Males adapt their calls to fit the need for vocalization. They use loud advertising calls during the breeding season to let females and other males know how fit they are. , slow, trilling encounter calls, a release call, and a land call produced most of the year especially during the beginning of the fall rainy season.

The Pacific Tree Frog has a broad geographic range. It is the most common frog in the U.S. west of the Rocky Mountains. The greatest current threat to this species is increased predation by non-native mosquitofish introduced to control mosquitoes. These fish consume larvae and eggs;.

Although called tree frogs, Northern Pacific Tree Frogs are not usually tree climbers, preferring a ground habitat among shrubs or grasses near water. They do climb high vegetation. Their call is the most common frog vocalization heard in the regions they inhabit; in fact, their croaking rib-bit call sung by a chorus of frogs is the source of another common name, Pacific Chorus Frogs. Recent DNA and morphological studies have suggested that there are three species of Pacific Tree Frogs (see Special Notes section). The species found in locations close to the Aquarium has been given the name Baja California Tree or Chorus Frog.