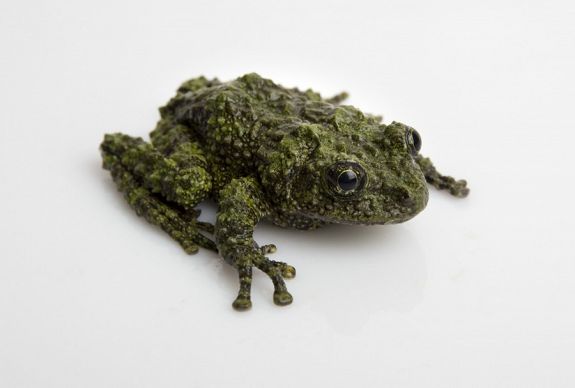 Our Mossy Frogs were obtained from a captive breeding program and are on exhibit in the Frogs: Dazzling and Disappearing exhibit area in the Tropical Pacific Gallery.

Native: Vietnam
From the Mao Son and Tam Dao mountain ranges of northern Vietnam. They may also to be found in adjacent Laos and possibly in Hainan, China.

Mossy Frogs inhabit mountainous, evergreen primary (undisturbed) rainforests, where there are exposed limestone outcroppings that have been cut through the steep cliffs by mountain streams. The frogs seek out flooded caves or crevices in rocks on the banks of the streams. They have also been found inhabiting man-made reservoirs. Breeding takes place in rock cavities or holes in tree trunks or roots.

Unlike many frogs that are smooth-skinned, Mossy Frogs have rough and uneven skin, with many spines and tubercles (wart-like growths). Coloration is many shades of green with red and brownish-black to black patches. When resting, they appear to be very flat and nearly as wide as they are long. Their toes have sticky pads that enable them to cling to rocky surfaces.

Breeding takes place between April and June. During this time, males call to demonstrate to females how fit they are. The call is quiet and melodious. The attracted female she lays a gelatinous mass of eggs usually just above the waterline in rock cavities or on floating plants in areas where there is still water. Eggs are also laid in holes in tree trunks where there is water. The male fertilizes the eggs as they are being laid or walks over them after they are laid.

Tadpoles hatch in fifteen to twenty days, but unlike poison dart frogs, they are not carried to water by the adult male. Instead they fall to the bottom of the pool where they hatched and undergo metamorphosis. Their gills are grown over by skin, eventually disappearing to be replaced with lungs. Teeth and rear legs develop. The head becomes more pronounced, and the body both widens and elongates. Front legs develop and the tail becomes a stub. The transformation to froglet may take four to eight months or more depending on temperature. The warmer the water, the shorter the time. When metamorphosis is complete, the froglet leaves the nursery for an adult habitat.

Active at night, these semi-aquatic frogs spend most of the day hiding in the water under rocks or attached to niches in rock outcroppings where they appear to be part of the moss growing on the rock. They also attach to plants floating on the surface of the stream. If threatened, they are able to curl into a ball, possibly to appear inedible to a potential predator such as a snake.

When Mossy Frogs are quietly resting, they flatten out and in low profile appear to be as wide as they are long. In this posture and aided by their coloration, they almost disappear into rocks covered with moss, an adaptation that can be an effective way to hide from predators or silently watch for prey.

Unknown in the wild. Twelve to fifteen years in protected environments such as zoos or aquariums.

Mossy Frogs inhabit undisturbed rainforests, but those primary rainforests are now being disturbed and degraded by logging and in some areas clearcutting, reducing available habitat. The International Union for Conservation of Nature (IUCN) Red List of Threatened Species lists the Mossy Frog as Data Deficient; however, the listing is based on 2004 field studies and the website states this information needs updating.

Mossy Frogs are currently (2017) listed as CITES Appendix II. CITES, the Convention on International Trade in Endangered Species of Wild Fauna and Flora, is an international agreement among governments. The United States is a CITES Party. CITES Appendix II requires that the government where the species is found must issue a permit before export.

There are captive breeding programs in U.S. zoos and aquariums, at commercial companies, and by hobbyists. A partnership of the Atlanta Botanical Garden, Suriname Forest Service, Conservation International Suriname, and the National Aquarium in Baltimore has a captive breeding program aimed at increasing the population of this species with the goal of releasing captive-bred frogs into areas where they are declining.

The first successful captive breeding of Mossy Frogs occurred in England and as a result of this success, captive-bred frogs have been distributed globally. These programs now supply the demand for Mossy Frogs, replacing the need for their wild capture.

The Mossy Frog, also known as the Vietnamese Mossy Frog, gets its common name from its camouflaged appearance. The mottled green and brown skin coloration combined with the skin’s wart-like texture causes this frog to blend into the moss-covered rocks in its steep, mountainous rainforest habit. It is protected in Surinam and in international trade. There is an active captive breeding program conducted by organizations in the U.S. and Surinam.