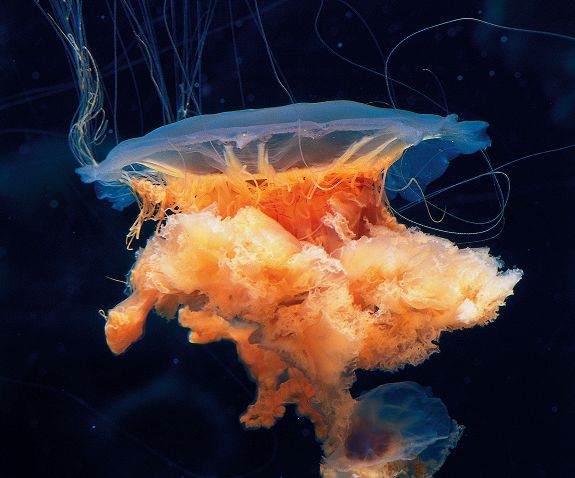 The lion's mane in this image looks a great deal like the egg-yolk jelly when its bell looks like a scrambled egg. |

Lion’s mane jellies are part of the Aquarium’s Jellies exhibits that opened in May 2015.

Almost worldwide in all but tropical waters. Arctic and Antarctica; along the coasts of eastern Canada and the Pacific northwest; seasonally occasionally as far south as southern California and southern Florida. Also in the Baltic Sea and some Japanese and Chinese waters.

These jellies live in cold, temperate, and subtropical coastal waters.

The gelatinous bell or umbrella of the lion’s mane jelly is broad, flattened, and has an eight lobed or scalloped margin. Seventy to 150 horseshoe-shaped clusters of tentacles arranged in four distinct rows hang from the underside of the subumbrella. Highly folded, frilly, short oral arms about as long as the bell is wide form a block-like mass on the underside of the bell. Bell colors can be milky to pale pink, brick red to reddish-purple, or yellowish- brown. The tentacles are usually yellow, yellow-brown, or red and the oral arms are usually a violet color. Juveniles are yellowish to pinkish, changing to darker colors as they mature.

Size of these jellies is dependent on their geographic location. Bells of individuals found in the very cold Arctic and Antarctic waters can grow to 3 m (7 ft) with tentacles as long as 30 m (100 ft). Lion’s mane jellies in the northeast and northwest United States and Canada can have bells reaching 51 cm (20 in) and tentacles 9 m (30 ft) long. Those jellies found in the warmer waters of the southeast United States are the smallest with bells reaching 13-15 cm (5 -6 in) and tentacles 2-7 m (7–9 ft) long. Overall most lion’s mane jellies have a bell diameter from 30-61 cm (1-2 ft), tentacles that are 1.8-2.4 m (6-8 ft) long, and oral arms as long as the bell is wide.

The lion’s mane jelly stalks and pursues its prey. When its sticky tentacles touch a food item, harpoon-like stinging cells called nematocysts are fired, paralyzing the prey. The tentacles then contract and bend toward the nearest oral arm. At the same time, the oral arm moves inward, turns slightly, and draws its inner layer near the food at which point the tentacles release the prey. The oral arm grasps the food spreading slimy fish smelling mucus over the surface of the prey. It then drives the food item into the oral arm groove from which it travels to the manibrium, (an esophagus-like connection between the mouth and the stomach cavity), and then to the stomach, where it is digested. If the prey is too large to enter the gastric cavity, such as a mature moon jelly, digestion starts on the oral arms. The oral arms also fire nematocysts to collect food directly without use of the tentacles.

Like other true jellies, these jellies have sexual and asexual stages in their complex reproductive cycle. Sexual: The male broadcasts sperm that find their way to the eggs in the female’s gonads where they are fertilized and then brooded on the folded margins of the female’s oral arms until they develop into flat, bean-shaped, ciliated, free swimming larvae called planulae. The released planula are free swimming for a few hours to several days until they attach to a shaded rough area.

Asexual: After settling, the planula develop into tentacled polyps called scyphistomes. If conditions are not favorable, budding off of non-motile clone scyphistomes occurs. If conditions are suitable, metamorphosis begins in a procedure called strobilation. In strobilation miniature medusa-like structures called strobilia are formed on a stalk, one on top of the other like a stack of dinner plates with the most mature on top. The strobilia bud off one at a time as individual ephyra (young, immature, free-swimming jellies) that ultimately develop the characteristics of an adult medusa.

These jellies swarm and their seasonal appearance in ocean waters is related to their reproduction cycle and water temperature. They appear along the southeast US coast in the colder months of the year beginning in late December or early January (hence another common name-winter jelly). Their numbers peak in late winter and early spring. By mid-May they have disappeared. In the Arctic, Pacific northwest, and the Atlantic northeast, they are most abundant in late summer.

The lion’s mane jelly has a range of symbiotic relationships with a number of other animals. Juvenile walleye pollack, Theragra chaleogramma, dart among its tentacles when danger threatens. Butterfish, Peprilus merlangus and P.simillimus, use the jelly for transportation while nibbling on its bell. Whitings, Merlanguis merlangus, use the jelly for shelter and in return clean arthropods from its bell. The nudibranch, Coryphella verucosa, eats its polyps.

Most adult medusae are believed to live about one year. Although not definitely known, the life span is probably correlated with the reproduction cycle. Jellies in the polyp stage can live for many years.

Since seawater temperature is a triggering factor in the movement of Lion’s mane jellies, global climate changes that alter the temperatures may impact the ranges and reproduction of these jellies.

The toxin injected by Lion’s mane jellies is potent and the effects may last for four to five hours. The sting is not life threatening unless the individual is sensitive to the toxin.

Exercising literary license, Sir Arthur Conan Doyle, author of the Sherlock Holmes mysteries, implicated this jelly as the murder weapon in The Adventure of the Lion’s Mane.

Leatherback turtles, Dermochelys coriacea, prey on lion’s mane jellies. They seem to be able to tolerate the jellies’ stinging cells except for their eyes that often become swollen. Between bites, the turtles use their flippers to brush off the stinging cells. How the turtles get energy from these jellies that have very little nutritional value is not known.

The lion’s mane jelly is the largest sea jelly among the over 200 species that make up the class of the true jellies, Scyphozoa. The genus name, Cyanea, is derived from the Greek ‘kyanos” which means dark blue. The first species described in the genus was dark blue. The Latin ‘capillus’ means hair and presumably describes this jelly’s many tentacles. The common name, lion’s mane, describes the perceived resemblance of the tentacles and their typical color to that of a lion’s mane. Because of their appearance, these jellies have been described as a mop hiding under a dinner plate.