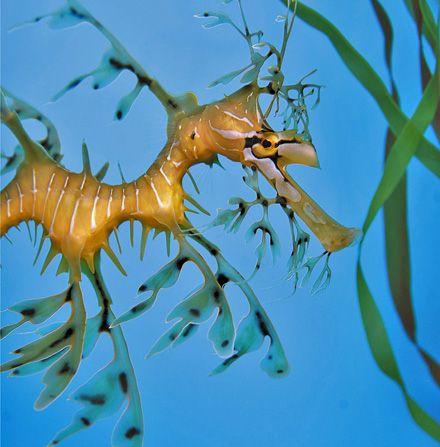 Seadragons like temperate water so the water in their habitat is colder than that in the rest of the Tropical Pacific Gallery exhibits. | Aquarium of the Pacific, B. Gray 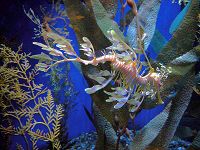 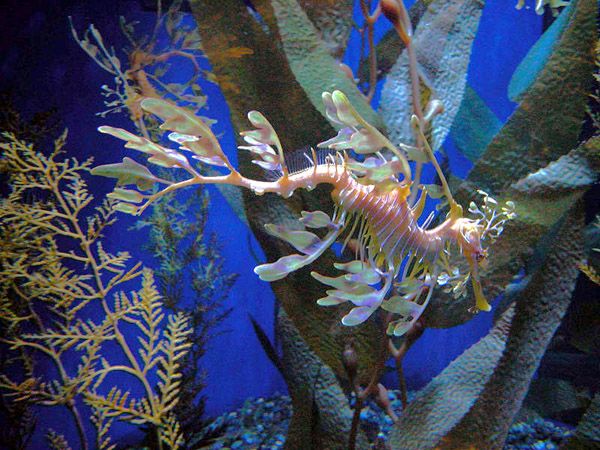 Photo taken at the Aquarium of the Pacific's seadragon habitat

© Aquarium of the Pacific and K. Leonard

Aquarists carefully monitor the water temperature in the leafy seadragons’ Aquarium habitat in the Tropical Pacific Gallery. The temperature is shifted up or down depending on the season of the year, but always stays somewhere between 13 to 19o C (55 to 67o F). Our seadragons are now fed frozen and cultured mysid shrimp, but it has taken some time to convince them that frozen are as good as fresh.

These seadragons inhabit temperate coastal waters of southern Australia where water temperatures are seasonally between 13 to 19o C (55 to 67o F). They live among rocky reefs, sand patches close to the reefs, seaweed beds, and seagrass meadows. Populations may fluctuate seasonally in response to food availability and spawning season. Leafies can be found from the surface to 25 m (82 ft).

The scaleless body of seadragons is covered is covered in hard bony plates. They have a small head with a long, thin pipe-like snout and a tail that is about half their total length. Elaborate leaf-like appendages protrude from the head, body, and tail. They have transparent dorsal and pectoral fins that are small and have a very fine appearance but they have lost their caudal and pelvic fins. They have long sharp spines on each bony plate that may be used defensively.

Shallow water leafy seadragons are yellow-brown or greenish with dark pink rib bands and green-brown pronounced leafy appendages. Those that live in deeper water are dark brown to burgundy red.

The maximum length of the leafy seadragon is about 35 cm (14 in).

Sea dragons do not have teeth or a stomach; therefore they eat almost constantly while covering wide areas searching for prey. They feed on mysid shrimp, a favorite food, and other small crustaceans, plankton, and larval fishes. They swallow their prey whole, creating suction to suck the food item into their small mouth by expanding a joint on the lower part of their snout. This feeding technique is similar to how a pipette works.

Like their seahorse relatives, male seadragons, not females, brood the eggs, but the eggs are incubated under the tail instead of in an abdominal pouch. The female lays 250 to 300 eggs that are 4 mm (0.16 in) in diameter and 7 mm (0.3 in) long. She pushes them into the skin of the male to be fertilized, covering most of the under surface and sides of his tail immediately behind his anus. His skin, soft at the time the eggs are first embedded, becomes hardened to form a cup around each egg to hold it securely for the 6-8 week incubation. When hatching starts, the male releases only a few eggs at a time. He may take from hours to days to let go of the entire brood.

Fry unroll from their tight position in the egg capsule, coming out tail first. They have a very short snout, lack leafy appendages, and are colored silver and black. They settle out on the substrate in shallow water where they live off the still-attached egg capsule for about two days until their snout is more pronounced and they are ready to start hunting.

Usually solitary, these fish move to deeper water during the Australian winter when food is scarce. In late winter they migrate to selected shallow bays, forming congregations to pair and eventually mate.

The outer skin of these fish is solid, limiting mobility. The only way they can propel themselves through the water is by rapidly oscillating ventral and pelvic fins. The pectoral fins are used mainly for maneuvering. The amount of air in their swim bladders fluctuates so that they can hold their position vertically or move themselves up and down in the water column.

The longevity of leafy seadragons is unknown, but they may live 7 to 10 years.

Leafy seadragons have been listed as near threatened on the IUCN Red List since 2006. These dramatic appearing fish are in trouble because of habitat destruction, pollution, excessive fertilizer runoff, and poaching by humans. They are fully protected under Australia’s local, state, and federal legislation. Special licenses are required to collect or export them and in 2015 the Australian government stopped issuing such licenses.

Inhabitants of temperate waters, increase of water temperature as a result of global climate change may impact their survival unless they can adapt to the changes.

The leafy sea dragon is the official marine emblem of the state of South Australia.

Named seadragons after the dragons of Chinese legends, leafy seadragons definitely resemble the dragon of fairy tales. They are bony fish in the family Syngnathidae which includes seahorses and pipefishes. Although relatives, their appearance is quite different in that they have a tail that cannot be coiled and they have leaf-like appendages on the head and body.