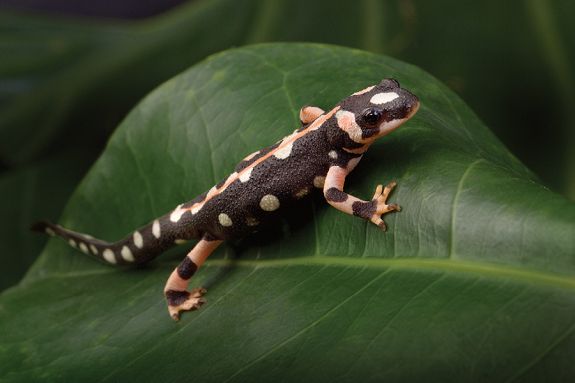 This newt is found in only four streams within a 6.2 square mile (10 square kilometer) area in the southern Zagros Mountains in the Luristan Province of Iran.

Their variable aquatic habitat tends to be the smaller, slower part of a stream with sand or pebble substrate. Terrestrial habitat includes open woodlands.

Kaiser mountain newts are slender, lizard-shaped amphibians. Their dorsal side is black with white spots and a narrow orange-red or yellow dorsal stripe running from just behind their head to their tail. The ventral side is orange-red or whitish possibly with black markings. A white patch runs between the eyes narrowing as it ends at the snout tip. Legs have white, orange-red, and black markings. Females are larger than males. The eyes are large and able to function both in and out of the water.

These newts feed on small invertebrates in the wild. At the Aquarium, this species is fed earthworms and Canadian night crawlers, bloodworms, and crickets.

Breeding takes place during March and April. The courtship ritual takes place on land near water. The male begins by slowly approaching the female and stopping in front of her. He begins fanning his tail in short spurts. When the female shows receptivity by moving toward him, he turns so they are facing the same direction and he is slightly ahead of her. He rapidly quivers his tail base while undulating his tail in quick movements. The female follows closely, periodically touching the male’s tail. She may slowly fan or undulate her tail. The male may stop moving but will continue when the female touches his tail. The male will deposit a spermatophore (sperm packet) after a number of tail touches. The male will guide the female to the spermatorphore so that her cloaca is over the spermatophore. She will then deposit the spermatophore into her cloaca to fertilize her eggs. She will lay her eggs in the water on a rough surface away from the light. Eggs hatch into grayish-brown larvae with black spots similar to adults but with external gills. They typically metamorphose into adults in three to five months. Metamorphosis may be faster if water temperatures exceed 680 F (200 C). Once they metamorphose they leave the water to live on land until time to mate.

Nocturnal. They forage for food mainly at night. N. kaiseri are terrestrial dwellers except during the breeding season.

During the hot dry summer, water may not be available so this newt may estivate by going underground where it is cooler and possibly more humid. Estivation is similar to hibernation.

Their bright coloration serves as a warning to predators not to eat it.

Studies have shown that males live up to fourteen years and females to 12 years in the wild. They can live between six and eight years in captivity.

Kaiser mountain newts are critically endangered due to pet trade exploitation, small native range, loss of habitat, damming of their streams, and severe drought. They are classified under Appendix 1 of CITES. They are also protected by the Iranian government. There are captive breeding programs in Iran, Europe, and the United States.

Kaiser mountain newts get their common name from the small area where they are found in Iran. Their back is black with white spots and a narrow orange-red or yellow stripe running from behind their head to their tail. This species is critically endangered due to its small range, habitat loss, and poaching for the pet trade.