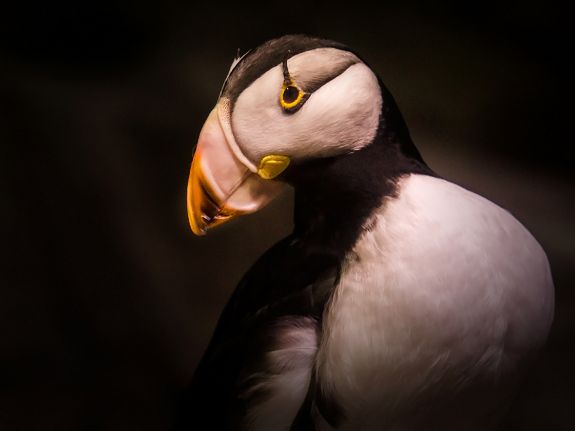 The lights in our Diving Birds Habitat are operated by a computer program that changes the amount of light in the exhibit to match that in their far north natural environment where the summer days of the breeding season are long and the winter at sea days very short. During the winter the habitat becomes dark at about 4 PM.

The open ocean is the winter habitat for Horned Puffins. In the breeding season, they seek out coastal islands and rocky cliffs. Juveniles spend one to two years at sea before coming to land to molt

These medium sized sea birds have a stout body, short wings, and feet placed far back on the body.
Breeding (Alternate):. Adult Horned Puffins are black with a large white patch on each side of the face and white underparts from the breast to under the tail feathers. They have a large, parrot-like, oversized bright yellow to reddish-orange bill, the end third of which is red. Their legs are yellowish-orange to reddish. Their eyelids are red. There is a small leathery ‘horn’ extending upward from above each eye.

Non-breeding (Basic): The white face patches become a smoky grayish-brown in front and silver gray in back. The bill is smaller, duller, and the plate that makes up the outer bill covering is lost. The horn is also absent and feet become a pale fleshy color. Body plumage becomes blackish-gray above and brownish-gray below.

Juveniles have coloration similar to that of adults in basic plumage; however, their face patch is smoky black, their bill is shorter, narrower, and entirely grayish-brown, and their upper body plumage is a dull blackish-brown with the underparts dirty white washed with a brownish-gray color.

These birds forage in small flocks, diving underwater to depths of 80 m (262.4 ft) for prey that is usually fish such as capelin, sand lance, herring, and lanternfish. Squid and other invertebrates; and zooplankton can also be part of their diet. Gathering food for its chick, the adult lines up the small fish crosswise in its bill with the heads and tails dangling out either side of the parent’s mouth. They are able to add a fish to the catch without losing any in the lineup as a results of spines on a puffin’s tongue and the roof of its mouth that act as hooks both to enable it to capture, kill, and hold prey.

Puffins breed in colonies. Socially monogamous, they form pair bonds that often last for many years. They arrive at the breeding grounds either in pairs or form pairs shortly after arrival. Courtship usually takes place on the water and begins with the male lifting his bill straight up, opening and closing his mouth, and jerking his head while the female hutches over low to the water keeping her head and neck close to her body. These actions are followed by billing in which the two birds face each other, waggle their heads, and touch bills repeatedly while opening and closing their mouths.

Horned Puffins nest in rock cervices in fragments of rocks at the base of a cliff (talus or scree), among beach boulders, and in cracks and crevices in cliff faces. On a few Alaskan Islands, they also nest in earthen burrows. They excavate and clean their burrows or crevices using their feet, and occasionally the bill. Nesting materials include grass, twigs, feathers, and even materials picked up at sea such as floating algae and plastic fishing line and nets. It is not known whether the male, female, or both prepare the nest.

Usually only a single whitish-colored egg that may have faint markings, spots, or scrawls is laid. Both partners share incubation duties for 40 to 53 days and then share feeding duties. The hatchlings are semiprecocial. At birth they are covered with down and their eyes are open. Parents brood the pufflings until they are able to maintain a body temperature of 39.5o C (103.1o F). This usually occurs at six days of age. The chicks stay in the nest or at the edge of the nest for 37 to 46 days until they are ready to fledge. They leave the nest at dusk or during the night, walking or flying from the nest directly to open water. The adults do not accompany them.

Puffins preen on land and in the water. They rub the side of the bill repeatedly on their oil gland and then smear the secretion over the body feathers to waterproof them. Wing-flapping is a common behavior in which the puffin lies to one side on the water so that one wing is under-water while the other is held in the air vertical to the water and flapped three to four times in the air. Satisfied that one side is clean; the bird turns onto its other side and repeats the wing-flapping. These behaviors can be watched at the Aquarium’s diving bird habitat in the Northern Pacific Gallery.

Horned puffins fly in small groups of 2 to 15 birds between nesting and foraging grounds at altitudes of 10 to 30 m (32.8 to 98.4 ft). While their flight is graceful and powerful, they are better swimmers than flyers. They lack good maneuverability and are often involved in mid-air collisions. Before landing at the colony, they circle the intended landing area a few times and then fly directly to the nest-burrow entrance—hopefully. They often do, however, crash into tall grass, rocks, and rocky slopes during landing.

They walk on rocky surfaces in an upright poison clinging to the uneven path with the clawed feet that they also use in nest preparation.

Fights take place frequently, even on rocky slopes, usually when another puffin is perceived to be invading the occupant’s territory. The intruder is threatened with an open bill that exposes the brightly colored mouth lining, head shaking and flicking (head jerked upward and bent toward the back), and side-to-side body rocking.

Puffins are well-suited to life at sea. Their feathers are waterproof to keep out the cold water in which they dive to feed. Their short, stiff wings help them to “fly” underwater in search of prey. Their bones are very strong to withstand the pressure underwater. They can store oxygen in their body tissues and also use anaerobic respiration to enable them to make long dives.

While there is little information on the life span of this species, there have been reports that some Horned Puffins have lived as long as twenty years.

Horned Puffins are protected in Alaska, where their populations seem to be stable. This is not true in the Lower 48 and British Columbia where numbers have declined as a result of bycatch in gillnets used in coastal waters, pressures of pollution (especially oil spills), and decreasing availability of fish. Populations of capelin, a nutritious fish, both fed to the chicks and eaten by the adults, are declining in Alaska, forcing the puffins to seek out less nutritious prey such as pollock and squid. The decline may be caused by global warming of waters near breeding sites. Encroachment and disturbance of nesting sites continues to be a problem in Alaska as does predation by Bald Eagles, Peregrine Falcons, red fox, river otters—all of which prey on adult birds. Common Ravens attack nesting chicks. Although the US Fish and Wildlife Service protects Horned Puffins, Native Americans can legally harvest adults and eggs for subsistence in most coastal areas of Alaska, especially in the Bering Strait region. The take is minimal due to the inaccessible location of most of the nesting sites.

Historically, puffins were used for food and clothing by some Alaskan and Canadian native people such as the Aleuts and the Inuits. Reversible parkas made from the skins of about forty-five puffins were worn feathers outside in rainy weather and feathers inside in cold dry weather. Bills were used as ornaments on clothing, in children’s rattles, and on mittens worn in ceremonial dances.

Horned Puffins are migratory seabirds of open ocean waters in the winter and coastal islands and rocky cliffs in the summer breeding season. The ‘horned’ part of their common name is derived from the small, dark, fleshy, horn-like projection above the eye that is present in breeding season.