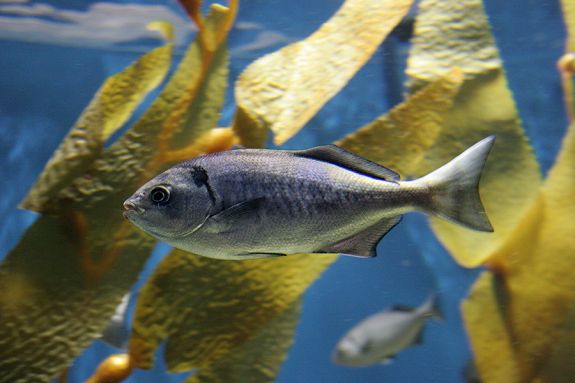 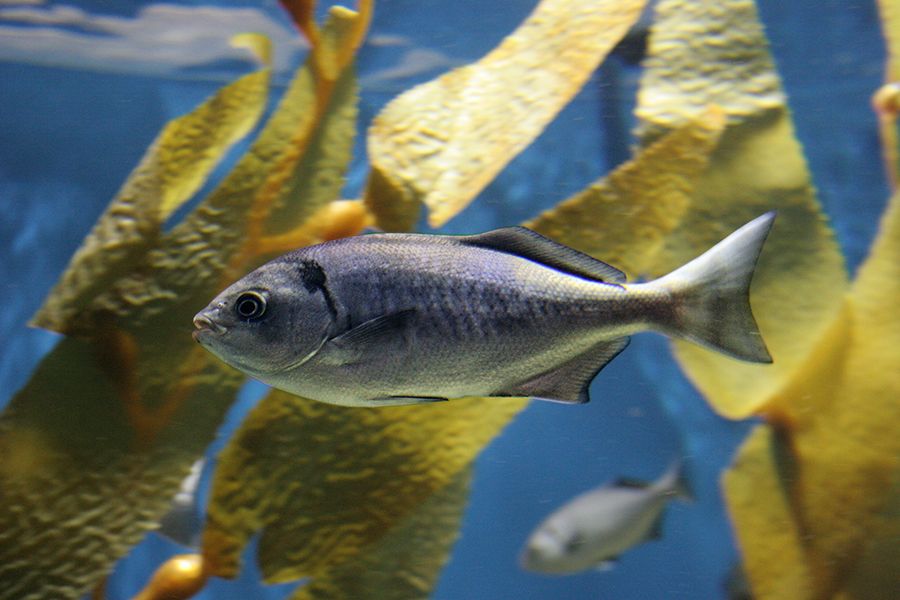 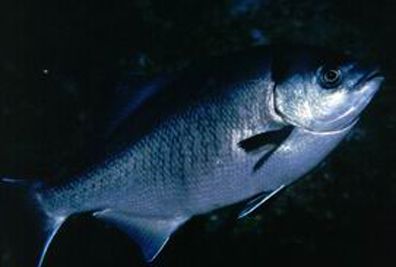 Our halfmoon fish were collected in local waters under a permit issued by the California Department of Fish and Wildlife. They live in the Honda Blue Cavern exhibit.

Vancouver Island, British Columbia to the Gulf of California, Baja, California. Most common south of Point Conception and especially Morro Bay and around the Channel Islands.

Halfmoon are commonly found high in the water column over rocks and at mid-depth over kelp. Preferred habitats include areas around rocky reefs, kelp beds, floating kelp pads, and oil rig structures. Although they are sometimes found at the surface of the water, their usual depths are 3-40 m (9-130 ft).

Halfmoon have a perch-like appearance, a football-shaped body that is deeply oval and laterally (side to side) compressed. They have a rounded head with a small mouth filled with a single row of pointed teeth and a blunt nose. Their caudal fin has a smooth, shallow curve. Scales are small, thick, and rough. The backs of adult halfmoon are a dark blue to blue-gray color that fades to a lighter blue toward the silver belly; however, the depth of the blue coloration varies by location. Those halfmoon found near offshore islands are bluer than their coastal counterparts and some inshore halfmoon are often blue-grey all over. Some halfmoon have indistinct bars along their sides. An identifying color characteristic for all halfmoon is s a dark spot just above the gill opening.

While kelp and red and green algae make up the primary diet of halfmoon, they are opportunistic feeders eating a variety of small invertebrates including sponges, crustaceans, and anemones.

Halfmoon become sexually mature when they are about 20 cm (8 in) long, a length attained when they are about two years old. Eggs and sperm are broadcast spawned into the ocean, usually from July through October. Heaviest larval concentrations are found in northern Baja California. Serve Fertilized eggs and the hatched larvae float in the water column as plankton. Larvae are most commonly found at depths of up to 240 km (150 mi). Very young adults usually occupy the outer fringes of kelp beds but also schooling with juvenile opaleye under floating kelp rafts.

Halfmoon are schooling fish. While juvenile halfmoon are sometimes found well offshore, they more often inhabit near shallow subtidal areas and kelp beds with adults. First year halfmoon as small as 2.54 cm (1 in) long are found at the outer edges of kelp beds and in schools of 15-50 in various inshore habitats including surfgrass.

From a distance halfmoon coloration allows these fish to blend with their surrounding waters. Fish near offshore islands exhibit deeper blue colors than fish found closer to shore, allowing them to blend more easily with the surrounding ocean. Halfmoon also exhibits a mild form of countershading, with a darker coloring on the top of their bodies blending to lighter blue or silver on the ventral or bottom side of the fish. Their distinctive dark spot above the gill opening may function as a false eye spot, serving to distract or confuse predators.

Natural halfmoon predators include sea lions, seals, larger fish, several species of marine birds, and on Santa Catalina Island, Bald Eagles. Halfmoon, a scrappy fish when hooked, are good eating fish sought after by recreational fishermen. They are taken as bycatch by commercial perch fisheries and sold fresh in fish markets. A small number are sold in live fish markets serving various ethnic groups. In spite of these pressures halfmoon are not yet overfished and are listed internationally as Least Concern.
Presently there are no restrictive regulations covering catch of halfmoon except in California’s network of Marine Protected Areas (MPAs) and other such state or international areas where depending on the type of MP designation, they may vary from no take to regulated commercial and/or recreational fishing.

Halfmoon and their close relatives opaleye and sea chub are considered to be important to the health of kelp forests. Because they feed on kelp, their presence in the forest community has an impact on controlling kelp growth. On the other hand, the heavy reliance of halfmoon on a kelp diet can be become a problem for commercial kelp growers, since concentrated feeding by schooling halfmoon can virtually destroy a crop.

Halfmoon, the common name of these fish, comes from the shallow curved shape of their caudal fin (tail) that resembles a crescent or halfmoon. Often called blue perch because of their “perch-like” body shape, these fish are found year-round in southern California ocean waters. Kelp and red and green algae make up the majority of their primarily herbivore diet, but they are also opportunistic carnivores preying on animals such as sponges and other small invertebrates when they encounter them.