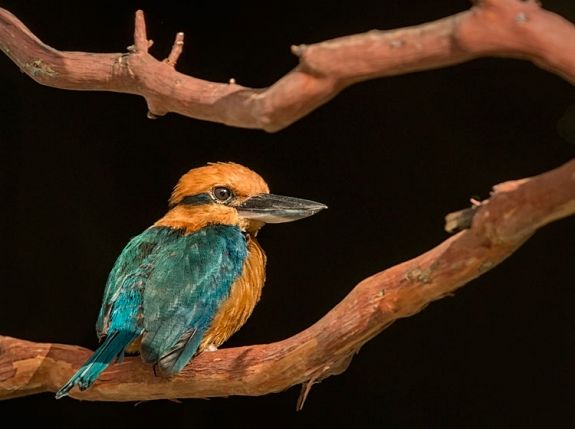 The Aquarium of the Pacific is housing two male Guam kingfishers. Nearly two dozen U.S. aquariums and zoos are conducting a captive breeding program with the goal of eventually reintroducing this subspecies into the wild. Due to our favorable southern California climate, we are able to house this species outdoors year-round, providing important support for this program. The Aquarium’s Guam kingfisher aviary is located outdoors near Shark Lagoon.

Guam Kingfishers are extinct in the wild. Today this kingfisher species is found only in captive breeding programs in the United States and on Guam.

Although once found in almost all habitats on Guam except for pure savanna or wetlands, this species was primarily a closed-canopy forest bird, preferring woodlands and limestone forests. They preferred perches on a low, exposed branch where they could watch for potential prey. They also inhabited ravines, agricultural fields, and secondary forests in addition to edges of forests and openings spaces. Mature forests with standing dead trees for nesting, exposed perches, and a variety of prey were also important.

Adult Guam Kingfishers are sexually dimorphic, that is, males and females differ in appearance and size. Both sexes have large heads, dark brown feet and irises, large black bills with some white at the base of the lower mandible, and greenish-blue backs. Males have a black ring around the eyes, a black line around the nape of the neck, a cinnamon-brown head, neck, and upper back and underparts. The lower back, lesser underwing coverts, and shoulder feathers of males are greenish-blue. They have a blue tail. Females are similar to the male but with a paler upper breast, throat, and chin, and white underparts and wing linings.

In the wild these kingfishers ate a carnivorous diet of large terrestrial insects and small vertebrates including grasshoppers, cicadas, skinks, anoles, worms, and hermit crabs. They would sit motionless on tree branches then swoop down to capture prey off the ground or off nearby foliage. They sometimes hunted insects in tree bark. These kingfishers beat their prey against a hard surface before swallowing it whole. At the Aquarium they are fed rickets, anoles, geckos and mice.

Both sexes become sexually mature at about two years of age. Females start to engage in flirtatious courtships. If the courtship is successful, a life-long partnership is usually established; however, some mated pairs “divorce” each other even years later.

The pair usually nests in natural tree cavities or build their own nest in large, soft, dead trees, termite nests in trees, or in root masses of tree ferns. Nests are made about a month before egg laying occurs. The male and female work together to build the nest by using their bills to excavate cavities into trees and rotting wood. Several nests may be built although only one will be used. It has been suggested that this activity may help the pair to bond. It has also been suggested that the parental behavior may be enhanced by a non-breeding escort bird helped that helps with breeding and guarding the nest and territory. The breeding season starts in December and several clutches may be laid. Clutch size is usually two but the range is one to three eggs. The eggs are incubated by both parents for about 22 days. Nestlings are fed by both parents. Fledging occurs when the chicks are about 30 days old.

Reproduction in captive breeding programs has suffered from incompatibility of some hopefully breeding pairs and a relatively high level of chick loss, either as embryos in-shell or as chicks in the nest. Reasons for this chick mortality are unknown, but how the parents care for the eggs and hatchlings seems to depend to a great deal on the parents. In captive breeding programs the odds of chicks surviving are increased in several ways. When two eggs are laid and the parents seem capable of raising a chick, they are allowed to care for one egg, while the aviculturists take care of the second egg and hand-raise the chick. If the parents seem incapable, both eggs and/or chicks are hand raised. If three eggs are laid, again depending on the parents, but two are raised by human caregivers.

Guam Kingfishers may form large flocks of territorial birds. They exhibit socially complex behaviors including aggression towards birds of other species, their own species, and especially between bonded pairs. They may even fail to bond with a member of the opposite sex.

Their loud, raspy voices are usually heard when they awaken at dawn with such regularity that they served as an alarm clock for nearby humans.

These kingfishers make a number of different vocalizations, ranging from loud rattle-like calls that can be heard for several hundred meters (useful in dense forests) to soft scratchy calls made when the birds are in close proximity to one another. While in flight they give a loud rattle-call, while a shorter version is used when diving for food, when excavating nests and during aggressive interactions. Begging nestlings also produce a type of rattle-call.

Now listed as endangered under the federal Endangered Species Act and critically endangered internationally, prior to World War II the Guam Kingfishers existed in large numbers almost all over Guam. The rapid decline is attributed to destruction of natural habitats and encroachment by humans for housing, agriculture fields, and the military airstrip; ingestion of prey and food items contaminated with DDT and malathion; and introduced predator species such as rats, cats, monitor lizards and especially the brown tree snake. The snakes are largely responsible for the near extinction of this subspecies in the wild.

Brown tree snakes are believed to have arrived on Guam in ships that may have come from Australia, Papua New Guinea, Vietnam or Melanesia. The snakes devoured eggs, hunted defenseless individual birds, and decimated the population. By 1984 only 29 wild birds remained. In an effort to save them from extinction of the Guam Department of Aquatic and Wildlife Resources and U.S. Fish and Wildlife captured all of these remaining birds. These birds became the nucleus of today’s captive breeding program on Guam and in U.S. zoos and aquariums. The zoo and aquarium programs operate under the an American Association of Zoos and Aquariums (AZA) Species Survival Plan For the Guam Kingfisher. In 2014 there were 139 birds in the breeding program. While it may be possible to increase the number of Guam Kingfishers to a level where they can be removed from the Endangered Species list, it is doubtful that it will possible to reintroduce them to Guam, because of the difficulty in eradicating the brown tree snake. Researchers believe they may have to be introduced to Pohnpei or Rota where a Micronesian Kingfisher subspecies appears to be thriving.

The American Association of Zoos and Aquariums’ (AZA) breeding program has shown that the male and female birds in a pair of Guam Kingfishers often do not bond and it is necessary to move one of them to another facility where he or she may be more compatible. Because of this possible movement our birds have not be given names as is the custom for the birds in our other exhibits. The female kingfisher is called 653 and the male, 679.

Chamorro stories tell of a village woman who was always talking loudly and making trouble. She wore an orange kerchief and a blue dress with a white apron. An angry “taotaomo’na” (spirit of Chamorro ancestors) then turned the woman into the first Sihek. Her clothing became the colors of the female Sihek. Now, the unhappy bird calls loudly when people are near.

Native to the island of Guam, the Guam Kingfisher is now extinct in the wild. It exists only in a captive breeding program in some U.S. zoos and aquariums and one on Guam.

These brilliantly colored birds are members of the tree kingfishers group (Alcedinidae). The Guam Kingfisher, called the Sihek in Chamorro, the native language of Guam, is one of three species of Micronesian Kingfishers. The other two species occur on the islands of Pohnpei, where the birds seem to be thriving, and Palau, where the population is declining. The kingfishers in these three different geographic locations were considered to be subspecies until 2015 when the taxonomy was changed and each was named a separate species.