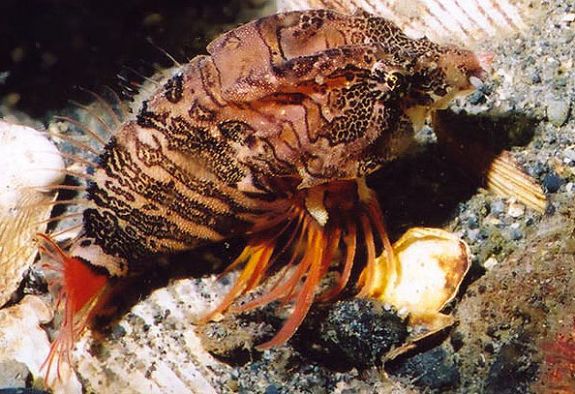 Grunt sculpins are found in the Aquarium’s Northern Pacific Gallery.

They are generally found along rocky bottoms and areas of sand mixed with rubble in intertidal zones, below the low tide level, and to depths of 165 m (540 ft). These fish prefer the empty shells of barnacles, especially the giant barnacle, (Balanus nubilis), as a hiding place and a nesting site in which to lay and brood eggs. In addition to barnacle shells, grunt sculpin also seek shelter in bottles, cans, and other ocean floor debris.

Grunt sculpin have short stocky bodies with large, bulbous heads and long, sharp, tapered snouts. Instead of scales, they have plates that have minute spines on them. Adults have small, flaplike cirri on the upper lip. These sculpin are mottled and streaked in shades of cream to orange-brown to dark brown. They have a bright orange bar on the base of the tail and all their fins except the pelvic fin are an orange-red color.

When ready to mate, a female grunt sculpin is a very determined fish. She aggressively chases males until she corners one in a cave, crevice, or, an empty barnacle shell. She lays up to 150 eggs while closely guarding her captive male until he fertilizes the eggs. Then she departs the nest, leaving the male behind as the primary nest guarder. She may return to the nest occasionally to take over guard duties.

An awkward swimmer, grunt sculpin move along the bottom or crawl over rocks on the tips of their finger-like pectoral fins. Their movements are short twitchy hops, jerks, and jumps.

The coloration of these fish camouflages them in their preferred habitats. Hiding in an empty barnacle shell with only their snouts protruding, they resemble a closed barnacle.

They are believed to live about four years.

Currently grunt sculpin are not listed as threatened or endangered. They are preyed on by Pigeon Guillemots (Cepphus columba).

These fish make a wheezing-grunting sound when removed from the water, hence the name, grunt sculpin. SCUBA divers say the grunts can be heard underwater.

Grunt sculpins, the only species in the family Rhamphocottidae, are unique looking marine fish. Distinctive characteristics include a large head that is about 60 percent of the body length, a long snout, and two bony ridges on top of the head. Instead of scales, they have small plates with many minute spines.