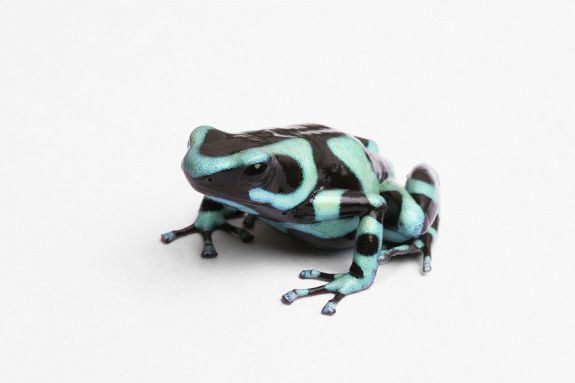 The alkaloid-laden insects from which the Green and Black Poison Dart Frogs get their toxins in the wild have never been part of the diet of the Aquarium’s frogs, so our frogs are not poisonous. Our aquarists do, however, provide them with a habitat that is as close as possible to that of wild frogs—dark, warm, and humid. This species is on view in the Frogs: Dazzling and Disappearing exhibit area in the Tropical Pacific Gallery.

Native: Central American and parts of northwestern South America
From southeast Nicaragua on the Atlantic slope and southeastern Costa Rica on the Pacific slope, through Panama to northwestern Columbia. Introduced to Oahu, Hawaii, and now also present in Maui.

Green and Black Poison Dart Frogs inhabit tropical and subtropical rainforest trees and the leaf litter on the damp rainforest floor, usually in areas that are near small streams or pools. Hawaii’s introduced population uses rainwater collected in lava depressions and in urban areas broken bottles and discarded cans for egg incubators.
Elevation: sea level to 2,640 feet (800 meters) with some mountain morphs to 3,869 feet (1200 meters).

The Green and Black Poison Dart Frog is a small to medium frog that lacks webbing between its toes but has adhesive pads on its toe tips that enable it to hang on when climbing. Size, coloration, and patterns are variable depending on location and/or morph. Patterns can be bands, blotches, or spots of color. The most common coloration is a black or dark brown background with a patterned coloration in shades of green. Variable colors, especially among morphs, can be a black, brown, or bronze background with pattern colors of bright green, green-gold, light blue, bright blue, turquoise, cobalt blue, or bluish-white. Most Hawaiian frogs are patterned a metallic green or green-gold, but some are blue-white.

These frogs spend most of the day searching for small invertebrates they find on the damp rainforest floor. They use their keen eyesight to spot prey and their sticky, retractable tongue to capture spiders, ants, termites, caterpillars, fruit flies, maggots, centipedes, and worms. At the Aquarium their diet includes crickets, wingless fruit flies, meal worms, and earthworms.

Breeding takes place from about mid-July through mid-September, in the rainy season. Males fight with other males to establish territories and use a slurred chirping call that sounds like “cheez-cheez-cheez” to attract a female.

Courtship is elaborate and involves touching and rubbing in addition to vocalization. The female lays four to ten gelatin-encased eggs in a moist, sheltered area. The male fertilizes the eggs externally as the female is laying them or shortly after by walking over them. No further parental care is provided until the tadpoles hatch about six weeks after the eggs were laid.

When the tadpoles hatch, they wiggle onto the male’s back and he transports them to a small pool of water or a stream. As the tadpoles transform into froglets, their gills, initially used to breathe, are replaced with lungs. Back legs form first and then the front legs, and the tail becomes a stub. Once metamorphosis is complete, the froglet leaves the water for a terrestrial habitat.

Males are polygynous during the breeding season, meaning that a male may have more than one female mate. The females compete for and guard their mates from other females and may even destroy the eggs of competitors.

This species is both a land dweller and tree climber. They often hunt and sleep in trees at heights of 33 to 49 feet (10 to 15 meters). Because of their size, they are unable to jump between trees, so they return to the ground when they want to move to another tree. To assist in climbing, these frogs have small adhesive disks on the ends of their toes that create a slight suction.

The variable pattern appearance and coloration of these frogs may be an adaptation strategy that has enabled them to survive in a wide variety of ecosystems. As in most poison dart frogs, the vivid coloration and patterns of the Green and Black Poison Dart Frogs serves a warning to would-be predators that eating them may be harmful to the predator’s health. Their alkaloid toxins are secreted through canals in their skin and is expelled if the frog is touched or bitten. The toxins of the Green and Black Poison Dart Frog are moderate when compared to that of some other dart frogs.

In the wild, when alkaloid-laden insects are not part of their diet, poison dart frogs gradually lose most, but not all, their toxicity. When they shed their skins, they eat the skin, recycling the toxin. Because of their diet, captive-bred frogs do not develop the toxin.

Unknown in the wild. In protected environments such as zoos and aquariums: at least eight years.

Green and Black Poison Dart Frogs are currently listed as Least Concern on the International Union for Conservation of Nature (IUCN) Red List of Threatened Species. However, the field studies were done in 2004 and the website states that the information needs updating. The IUCN works on conservation and stability of wildlife globally. The Red List provides information and analyses on the status, trends, and threats to species to inform and catalyze action for biodiversity conservation.

Today several morphs are in serious decline and overall the species, like many other rainforests inhabitants, may be on the brink of trouble due to alteration of their ecosystem due to human activities and climate change. The impacts of rising temperatures and decreased rainwater availability may alter the rainforest’s humidity and the availability of water sources needed for breeding.

This species is listed as CITES Appendix II. CITES, the Convention on International Trade in Endangered Species of Wild Fauna and Flora, is an international agreement among governments whose aim is to ensure that international trade in selected species of wild animals and plants does not threaten their survival. The United States is a CITES Party.

In 1932 Green and Black Poison Dart Frogs from the Bay of Panama were intentionally introduced in the Hawaiian island of Oahu for mosquito control. The species has now spread to other Hawaiian islands. The coloration of the introduced frogs is not typical, more often blue and black, rather than green and black.

Green and Black Poison Dart Frogs get their common name from their coloration, a black background with a green pattern. This is the most common coloration but there are at least eight morphs in various locations in which the coloration and patterns are not the same as in the more common coloration. Size may also vary by location. This species’ toxin is moderate in strength. Although not listed as threatened or endangered, several of the morphs are in serious decline. The species is protected by agreements among many countries, including the United States, that restrict international trade. Extensive captive breeding programs are supplying the demand for these colorful frogs.