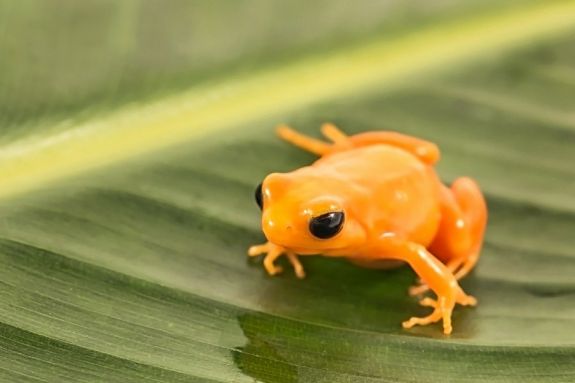 Golden mantella frogs are found in the Jewels of the Pacific exhibit in the Tropical Pacific Gallery.

This species is found only in isolated areas of east central Madagascar.

This frog is a terrestrial species typically found in sun-exposed sites among vegetation in damp swampy areas.

This frog is orange, bright yellow, or red with some red color on the upper surface of the hind legs. Its eyes are usually black. The legs are short, with adhesive discs on the fingers and toes. Females tend to be larger, thicker, and less angular than males.

These frogs feed on insects, typically ants, fruit flies, termites, and any insect that fits into its mouth. At the Aquarium they eat tropical springtails, wax worms, and newly hatched pinhead crickets.

Breeding typically begins after the first heavy rains and when food is plentiful. Males use their call to attract females. The female will lay a clutch of twenty to sixty eggs in moss, damp leaves, or under rocks or bark next to a water source. The male usually fertilizes the eggs immediately, but they may be fertilized up to two days later and by multiple males. After two weeks, the eggs hatch into tadpoles, which will either wriggle into the water source or will be washed into the water during a storm. Tadpoles metamorphose into frogs in approximately seventy days.

Golden mantella frogs typically remain inactive during the winter months of May to October. In summer they are active during the day. They live in groups with typically twice as many males as females. M. aurantiaca uses sounds to communicate and vision to locate prey.

Their bright coloration serves as a warning to predators that it is toxic and not to eat it.

This species typically lives eight years in the wild.

Listed as critically endangered by the International Union for Conservation of Nature. Major threats include fragmented forests, deforestation, logging-related activities, urbanization, and degraded habitat. Exportation limits have been imposed. There is a plan to control the pet trade. This frog has been successfully bred in captivity.

Golden mantella frogs get their name from their bright yellow or orange color. This critically endangered frog is found in humid forests of east central Madagascar. Their bright coloration advertises to predators that they are toxic. They breed and lay eggs on land. Rain washes the hatching tadpoles into pools or streams. This frog faces further fragmentation or loss of habitat, plus pressure from the pet trade.