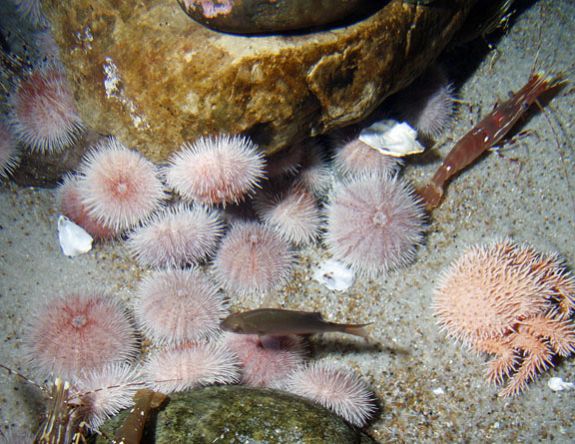 These fragile pink urchins were photographed in their whale fall habitat. | Perry Hampton/Aquarium of Pacific

Eastern Pacific Ocean from the Gulf of Alaska, south to the northern Baja Peninsula

Living at depths of 91 to 488 m (300 to 1600 ft), fragile pink urchins prefer a sandy bottom habitat; however, they are often found in large groups on kelp rafts called kelp falls, masses of kelp that have fallen to the ocean bottom.

The fragile pink urchin’s body is flattened and apple-shape with long and short spines that radiate outward from its domed body. There are also spines on the ventral side of its body and around its mouth. Its endoskeleton, called a test, is quite thin. Tiny holes in the test allow for the urchins tube feet to extend.

The urchin’s mouth is located centrally on the bottom side of its body. Retractable lips cover what appear to be five tooth-like graspers but are actually one continuous part. Waste products are excreted through the anus, located on the top of the test.

Fragile pink urchins are bottom feeders. They scavenge particles, scraps, and other detritus that drifts down to them in the form of marine snow, and also scrap kelp for edible particles using their rasping teeth. In the northern part of their range they feed on bull kelp. Off the coastline of California, these urchins often collect giant kelp, Macrocystis pyrifera. They trap floating pieces with their sharp spines and hold on using hundreds of tiny sticky tube feet.

Reproduction is believed to take place in the spring and fall. Sexes are separate. Sperm and eggs are excreted through openings called gonophores that are located on the top of the urchin body. They are broadcast into the water column where fertilization takes place externally. Larvae develop the radial symmetry seen in all urchin species.

Sea urchins use a water vascular system to manipulate their tube feet. Water movement to and from the feet is controlled through muscular tubes. As the tube feet press against an object, removal of water from the tube creates a vacuum. When the tube is refilled with water, the vacuum is broken and the grasp of the foot is released.

Fragile pink urchins have the ability to burrow slightly into the sand substrate but they do not wholly cover themselves.

These urchins store lipids throughout their bodies, utilizing their reserves when food is scarce. The lipids are primarily stored in the gut wall. They are also stored in the test epidermis, and gonad.

Although sea urchins do not have eyes, they are sensitive to touch, light, and chemicals chemicals.

Fragile pink urchins have not been evaluated for listing on the IUCN Red List. Populations appear to be stable. Because of the depths fragile pink urchins inhabit, unlike many other urchin species, they are protected from being harvested for their roe by commercial fisheries.

Because development and growth of their test requires calcium, they may be impacted by changes in ocean chemistry (ocean acidification); however, this species of deeper dwelling urchins may not be as affected as some studies of more shallow water

The mouth structure of sea urchins, called Aristotle’s Lantern, was first described by the Greek philosopher Aristotle (384-322 B.C.) in his document The History of Animals.

The live fragile pink urchins in our whale fall exhibit are in the second wave of animals to arrive at whale falls in California waters where they come to feed on detritus left over by the mobile first scavengers, hagfish, sleeper sharks, and spotted ratfish.

Fragile pink urchins, considered by many to be the most beautiful sea urchin because of their color, belong to a group of invertebrates called echinoderms, that is, spiny-skinned animals. They are related to sea stars, sand dollars, and sea cucumbers. Like their relatives, they are bottom dwellers and do not have a brain or a heart.