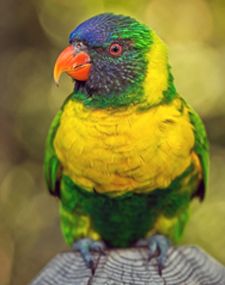 One of our Edward's Lorikeets. | Used with permission of Robin Riggs

Our lorikeets either came from the Aquarium’s breeding program or from U.S. captive breeding programs. None have been imported. All our lorikeets including Edward’s have distinctive personalities and even respond to the names given them by the aviculturists who feed and nurture them.

Indonesia’s Timor Islands south of the Malay Archipelago and north

Edward’s Lorikeets are a coastal species, found below 500 m (1,640 ft) in a wide range of habitats including mixed and eucalyptus forests, mangroves, savannahs, coconut plantations, and in gardens and villages.

The forehead, cheeks, and chin of Edward’s Lorikeets are dark blue. The rest of the head is green with a broad yellow-green band on the nape (back of the neck). The upper breast is yellow with dark narrow green edges to the feathers. They have a dark green belly. Males and females are usually similar in color; however, occasionally the breast feathers of a male may be edged in orange and those of females in green.

Edward’s Lorikeets primarily feed on pollen and some nectar that they obtain by placing their beaks into the flowers and extracting the pollen or nectar with papillae on their tongues. They also eat fruit, selected greens and seeds, insects and insect larvae, and unripe grains of corn and sorghum. They drink surface water and water trapped by leaves.

Food is stored in their crop for short periods to be regurgitated to feed themselves, their partners, or their chicks. Because they have immature gizzards, they can only eat soft, non-fibrous foods. Their intestinal tracts are short and soft food is easy and rapidly digested. Since most of the food they eat is low in nutrients, they must eat frequently, and because most of what they eat is regurgitated liquid, they excrete liquid very frequently.

These lorikeets usually become sexually mature at about two years of age.

It is believed that wild birds form life-long pairs. Courtship is elaborate. It includes wing fluttering to show underwing patterns, head bobbing, tail fanning, sway-walking, and beak-fencing. Edward’s Lorikeets normally nest high in unlined tree hollows. They are very territorial of their nests. In the Aquarium’s aviary they nest in specially designed nest boxes and sometimes in tunnels they dig under rocks and plants. Usually two, but occasionally three eggs are laid that are usually incubated by the female for about 23 days. However, the male may spend a good deal of time in the nest as well.

Chicks are altricial at birth, that is undeveloped and requiring parental care. Fed by their parents, in the wild they remain in the nest for 49-56 days. They become completely independent about 14 days later. In the Aquarium’s breeding program, some chicks are removed from their parents and are hand raised, to accustom them to the presence of people and to teach them to accept food.

Very busy birds, Edward’s Lorikeets spend a great deal of their time feeding and playing. Although one of the less noisy lorikeet species, they do make a great variety of distinct and different sounds from twittering and chattering to screeching, hissing, and clicking.

Roosting sites may contain several hundred birds. The reasons for the large colonies is believed to be for sharing information about food resources, the security of numbers, or as a place for young birds to learn to find and eat different types of food.

The tips of their tongues are covered with small surface projections called papillae. These papillae increase the surface area of the tongue, acting like a sponge. They enable the lorikeet to collect a greater amount of pollen. The tongue moves very rapidly in and out of the food source, enabling the bird to collect larger quantities of food and therefore spending less time feeding.

The feet of these birds have two forward and two backward-facing toes. These, combined with their strong beaks enable them to be excellent climbers, hang upside-down, and in general perform an astonishing array of acrobatics, especially while feeding.

Lorikeets do not have oil glands. Instead they preen their feathers by using powder down obtained from special feathers that have tips that constantly break down from a waxy powder.

Protected environments such as aquariums: 15-25 years In the wild: believed to be about 6-8 years

Currently Edward’s Lorikeets are not one of the 13 subspecies of lorikeets listed internationally as endangered or vulnerable to extinction; however, the Indonesian government forbids export of the subspecies from Timor Island, its native habitat.

Tulip, one of our Edward’s Lorikeets, knows and says “Hi Tulip!” repeatedly.

Edward’s Lorikeets are included in the subspecies capistratus that also includes two other lorikeets with different common names, the Marigold Lorikeet and the Wetar Lorikeet. Each inhabits a different area of Timor Island.