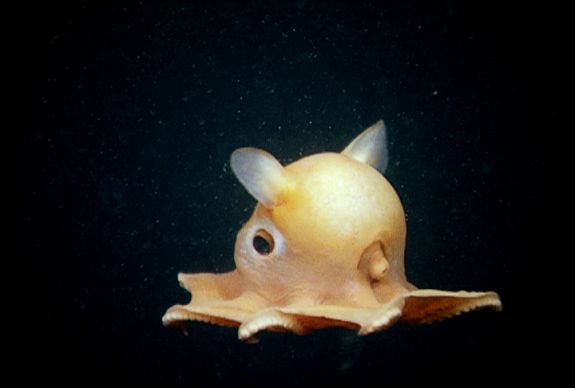 Worldwide having been found in New Zealand and Australia, Monterey Bay, California; Oregon, Philippines and in Papua, New Guinea

Dumbo octopus have a semi-translucent body with an internal “U” or “V” cartilaginous shell or mantle, which gives them some shape. Some Dumbos are short, squat and yellow, while others resemble a sea jelly with one giant, brown, walking shoe. Some have suckers, in addition to spines, on all of their webbed tentacles while others look more like a traditional octopus with the addition of blue or other colored “ears.” Prominent ear-like fins protrude from the mantle just above the almost sightless eyes of the octopus. They have eight webbed tentacles.

Dumbo octopuses pounce on prey and eat it whole. Their diet includes copepods, isopods, bristle worms, and amphipods. Much of the food they consume is also found around ocean vent ecosystems or floating along in the current.

Grimpoteuthis has one of the most unusual breeding capabilities of any marine life. Females necropsied have shown eggs in various stages of maturation which means that there is no breeding season and females can lay eggs continuously under small rocks or on shells in the deep ocean. Males have a separate protuberance on one of their arms that transports an encapsulated sperm packet into the female’s mantle. It is thought the female can utilize sperm for fertilization at almost any time.

Neutrally buoyant, they have several observed types of mobility. Flapping their Dumbo ear-like fins gets them moving with peculiar grace and ease. Expanding and contracting the webbing between their tentacles or by shooting water through their funnel cause a sudden thrust, useful for escaping a predator. Any of these methods for movement can be used separately or simultaneously. These octopus can also do the more ordinary octopus movements such as crawling on their tentacles.

Deep-water creatures, the Grimpoteuthis appear to have adapted to the intense pressure and cold temperatures of the deep ocean by forgoing propulsion and growing mantle fins. Their reproduction schedule appears to be on-going, so they out-pace more shallow-water octopus species.

Little is known about Dumbo octopus and they have not been evaluated for population status.

Grimpoteuthis spp, are known as the deepest living of all octopus species. They live on the seafloor or hover just slightly above it at depths of depths of 3000 to 4000 m (9800 to 13000 ft),

The similarity of the ear-like fins protruding from the top of the mantle of the Dumbo octopus to the ears of the Disney character, Dumbo, the Flying elephant, led to the common name, dumbo. There are about 17 species of Dumbo octopus that belong to a group called “umbrella octopus,” because they are able to float with an umbrella-like look to their mantle. While these species can “flush” color as do more shallow species, their mouth structure is different. It has a degenerated radula-type opening that allows it to swallow prey whole instead of having to tear and grind it. This feeding characteristic unique to the genus Grimpoteuthis.