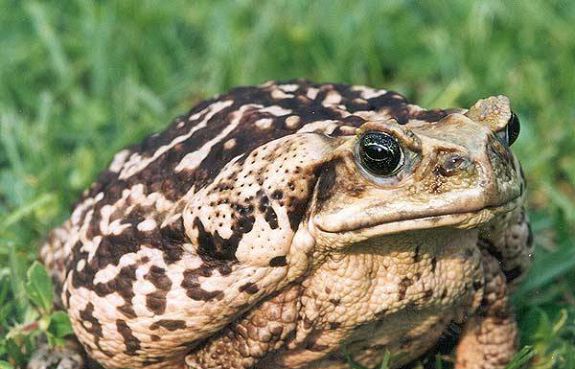 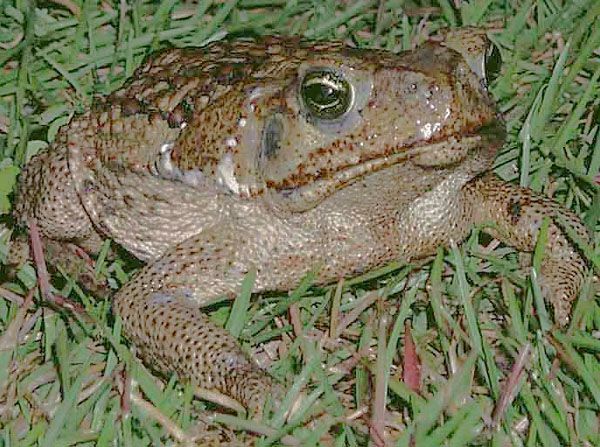 Not on exhibit. Information is presented for use as a reference.

In their natural environments these toads live in sand dunes and coastal grasslands to the margins of rain forests and mangroves. In environments into which they have been introduced, they also may inhabit urban and agricultural areas.

Cane toads are large squat amphibians. They have a bony head and bony ridges over the eyes that meet above the nose. The hind feet are webbed between the toes but the front feet are not webbed. Their most distinctive feature is their parotid glands, a large swelling on each shoulder behind the “ears” and extending down the sides that contain toxin. Their body is usually covered with warts that are tipped with small spines that also discharge toxin. Males are “wartier” than females and some females do not have any warts. Young cane toads lack conspicuous parotid glands.

The coloration of adults varies. Usually brown or gray-brown, they also can be olive or reddish-brown. They may have cream colored spots scattered across their backs, sides, and legs. The undersides are creamy-yellow, sometimes flecked with black. Tadpoles are shiny black on top with silvery-white, black spotted bellies and spots of white across the back, sides, and legs.

Cane toads eat almost anything they can swallow, limited only by the size of their mouths. Most of their diet consists of insects—beetles, honey bees, ants, winged termites, and crickets—but they also occasionally eat marine snails, native frogs, small toads, snakes, and small mammals such as cats and dogs. Voracious omnivores, they have adapted to eating carrion, processed cat and dog food, and household garbage scraps.

Tadpoles eat algae and other aquatic plants. They pull off the algae with five rows of peg-like teeth. They also filter organic material from the water.

In most geographic areas these toads reach sexual maturity at 18-24 months. In Australia it may occur as early as 12 months. Breeding usually is seasonal from early spring to autumn starting after the season’s first rainfall or when the water temperature reaches 25o C (77o F). Males develop dark lumps called nuptial pads on the first two ‘fingers’ of their front limbs ; these help them grasp and hang onto a female toad. Ready to breed, the males migrate to the water’s edge of still or slow-moving breeding ponds that can be fresh or brackish, with salinity as high as 15 percent. There the males call females with a low-pitched, rattling trill that has been compared to the sound of a telephone dial or a distant tractor’s exhaust.

A male grabs a female under her ‘armpits’ and they swim together until the female touches a submerged object or a water plant. She then releases a transparent gelatinous string as long as 2.1-3 m (7-10 ft) that contains a double row of dark eggs. The string may contain 8,000-35,000 eggs. Fertilization is external. The male ejects his sperm over the spawn. Two clutches may be laid. Only about 0.5 percent of the eggs survive to reach sexual maturity and reproduce.

The eggs hatch in 1-3 days, forming a school of tiny black tadpoles. In three to twenty weeks (depending on food supply availability and water temperature of the habitat), the tadpoles metaphormose into 1-1.5 cm (0.39-0.59 in) toadlets that leave the water and congregate in large numbers.

These toads respond to threats by turning sideways so that the parotid glands are directed toward the attacker. The toxin, bufotoxin, usually oozes out of the glands, but it can be squirted in a spray for a short distance. The toxin also is released when pressure is applied to the glands such as results from handling a toad or an animal such as a dog or cat taking it in its mouth. The milky-white toxin is absorbed through the victim’s eyes, mouth, and nose. In humans it can cause intense pain, temporary blindness, and inflammation.

Cane toads are nocturnal during the warm months of the year. In cold or dry weather they shelter in moist crevices and depressions that they excavate under logs.

Cane toads can lose up to 50% of their body weight through dehydration without being affected detrimentally. They replace their body fluids when water is available. They can survive in temperatures from 5o C to 40o C (41o F to 104o F)

In the wild cane toads have a life span of at least 5 years.

Cane toads were introduced into Australia from Hawaii as a way to control sugar cane beetles whose larvae eat the roots of sugar cane, destroying the plants or stunting the growth. Unfortunately, the toads had no impact on the beetles. Cane toads live on the ground and the beetles, which live higher up on the plant, are rarely on the ground. The toads could not jump high enough to reach the beetles nor were they present when the grubs laid on the ground hatched. However, because of their breeding habits, the cane toads multiplied at a high rate and today have caused the decline of native frogs, toads, and other animals by competing successfully for food and breeding places. The Australian government spends a great deal of money annually in efforts to eradicate the toads, which have few predators. In geographic areas where the toads are native, they are not a problem because of the presence of natural predators.

Some birds and rodents have found a way to eat cane toads without being exposed to the toxin. After killing a toad, they turn it on its back, pull away the toad’s soft belly skin, and eat its internal, toxin-free organs, leaving the skin and parotid glands behind. Some native rats have learned to eat only the legs of cane toads.

A substance modified from bufotoxin is used in Japan as a hair-restorer. It is also used in oriental medicine.

Also known as the giant or marine toad, cane toads have the dubious distinction of being on the Global Invasive Species Database of “The 100 World’s Worse Invasive Species”. Their potent poison is contained in glands in the skin and in the immense parotid glands on each shoulder. These toads are poisonous in all stages of their lives—as eggs, tadpoles, toadlets, and adults. The secretions of cane toads are highly toxic and can sicken or kill animals that bite or feed on them, including cats, dogs, birds, and snakes.