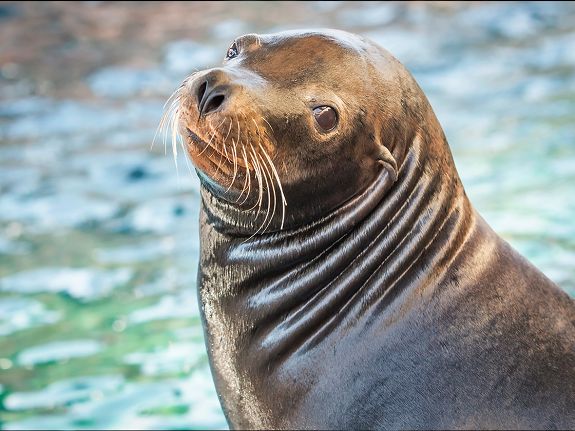 Our sea lions are on view in the Seals and Sea Lions Habitat.

Sea lions inhabit temperate or subtropical waters. They haul out on quiet sandy beaches, offshore rocks, and on man-made structures such as piers, boats, breakwaters, and buoys. They remain close to the water’s edge of beaches during warm weather, moving inland or up coastal slopes during cool weather or at night.

The adult male’s body is robust at the neck, shoulders, and chest with a rather slender hind end, while females and juveniles are slender-bodied and more streamlined. These sea lions have a long, straight, and narrow snout and distinct, small, external ears. Long paddle-like fore flippers that end in tiny claws with hair on the upper surface extending past the wrist are used for propulsion through the water. Their hind flippers, used as rudders for steering, are much shorter and have fleshy tips and short narrow claws at the end of the digits. They have a small but distinct tail. Mature males have a prominent protruding forehead with a large bump of bone called the sagittal crest. The crest is topped by a light colored hair tuft. Unlike other sea lions, California sea lions do not have a lion-like mane.

Adult males are mainly a dark chocolate-brown color, except for light tan areas on the face. They appear black when wet. Most males do not fade to a lighter color after molting. However, a small number do remain light yellow to blond their entire lifetime. Adult females and juveniles are tan or blond except for a short period after molting when they are light gray to silver-gray. Molting begins at about puberty. Adult males seem to molt in January and February, with females and juveniles molting from early autumn through the winter. Pups are dark brown to black when born, fading to light brown within a few weeks. At approximately four to five months of age, pups molt to a light gray pelage, darkening to a dark chocolate that fades to light tan.

These pinnipeds are opportunistic feeders usually seeking prey in cool, upwelling waters near the coast, around seamounts, along the continental shelf, and occasionally on the sea bottom, Mackerel, market squid, anchovy, rockfish, and salmon are favorite food items. Food is swallowed whole without chewing. They compete with commercial and sport fishermen, stealing hooked prey, catch from nets, and salmon migrating to spawning areas.

Females are mature at three years of age and males at five. These sea lions congregate in huge colonies in breeding and birthing areas—the Channel Islands off the coast of central California, islands along the northern Pacific coast of Baja California including Guadalupe Island; islands along the east coast of Baja California; and on beaches in the mid and southern Gulf of California. Males arrive at breeding grounds before females and set up territories that will eventually include three to forty females.

Birthing of sea lions takes place on land. Shortly after arrival, from late May through July, the pregnant females give birth to pups conceived in the past year’s breeding season about 12 months ago. The pups weigh 6-9 kg (13-20 lb) at birth. Within about three weeks after giving birth, females are ready to breed again. Males compete to mate with the females and defend their territory with ritualized physical displays including vocalized threats, aggressive posturing, and occasionally physical combat. Delayed implantation of the fertilized egg in the mother’s uterus ensures that her pup will be born at the breeding ground when colonies form again a year later.

Females stay with their pups for the first seven to ten days and then begin to forage at sea for one to three days at a time. Returning to shore, they quickly find their pup by smell and vocalization. They spend a day on shore after each foraging period nursing the pup. An older pup may accompany its mother on some foraging trips. Younger pups congregate in large groups to play and socialize. Pups are weaned abruptly and abandoned by their mothers usually when six months old.

California sea lions are social animals. When hauled out they rest close to and often on top of each other. The noise level in the colonies is intense as a result of their loud vocalizing that some have compared to a lion’s roar or dog’s bark. They may forms rafts or travel and play in groups of twelve or more.

These pinnipeds may spend several days to several weeks at sea foraging. During this time they dive almost continuously, taking brief surface rests. In the summer, females dive for up to four minutes to 75 m (245 ft). In winter, their dives are deeper and longer. The maximum dive time recorded is 12 minutes and the maximum diving depth is 536 m (1,760 ft).

They use their flippers to help regulate their body temperature. They rest on the surface of the water on their backs with heads and flippers above the water. They wave their flippers in the air to absorb heat from the sun and to lose heat to the water.

California sea lions are well adapted to their marine environment. Limbs that evolved into flippers and body shape allows efficient movement through the water. Their thick blubber layer aids in temperature control. Vision is keen and better in the water than out. Very sensitive vibrissae or whiskers are an important sensory part when the animal is hunting for food or swimming in a dark or constricted area. Muscle tissue myoglobin stores relatively large quantities of oxygen, helping the animal during long periods under water and during deep dives. The myoglobin can supply oxygen when other oxygen sources are exhausted. Sea lions have the ability to direct oxygen-rich blood to critical organs where it is most needed.

Female California sea lions have a lifespan of 18-25 years. That of males is slightly less.

Although hunted in the past, the current sea lion population has increased substantially along the United States west coast since the passage of the Marine Mammal Protection Act of 1972. Of the five species of sea lions, the California sea lion is the only one in which the population has increased. This increase in numbers has resulted in conflicts with marina owners, fishermen, and local governments as the sea lions have damaged boats and docks, ‘stolen’ fish from fishing gear and salmon runs, and hauled out in numbers on popular beaches. The conflicts have escalated at the Bonneville Dam on the Columbia River in Washington State where the sea lions target salmon congregating at fish ladders to go upstream to spawn. NOAA’s Office of Fisheries issued permits to Washington , Oregon, and Idaho to capture or kill as many as 85 sea lions at the base of the dam for five years. The permit was challenged in court and a decision was made that only capture in traps is permitted. Captured animals are either relocated in the wild or sent to the protected environments of zoos or aquariums. There have been reports of trapped animals being illegally shot and killed by unknown persons.

Sea lions are affected by changes in water temperature associated with climate changes such as El Niño. As the water warms, many of their food sources move to colder waters, making it difficult for the sea lions to find food close to their breeding areas. Nursing females forage for food further and further away from their land-bound pups, often resulting in abandonment of the pups.

Marine mammal care centers annually treat sea lions affected by these climatic changes, parasitic and bacterial infections, and human-caused injuries. The goal is to rehabilitate the animals so they can be returned to the wild. If a decision is made that the animal could not survive in the wild, such as is often the case with abandoned pups, they are released to protected environments. Odin, one of the Aquarium of the Pacific’s former sea lions, came from the Marine Mammal Care Center at Fort McArthur in San Pedro, California.

The group of marine mammals called pinnipeds is made up of three closely related families: Otariidae (eared seals), the family to which California sea lions belong; Phocidae (true seals); and Odobenidae (walrus). The term pinniped is derived from the Latin pinna, meaning winged, and ped, meaning foot, referring to the appearance of the flippers of these families.

The genus name, Zalophus, is derived from the Greek prefix za and lophos for crest, referring to the large sagittal crest on the skull of a mature male sea lion. There are three subspecies in the genus Zalopus based on geographic location and some morphological differences: California sea lion, Zalopus californianus; Galapagos sea lion, Z. wollebaeki; and the Japanese sea lion Z. japonicus , which is presumed to be extinct.