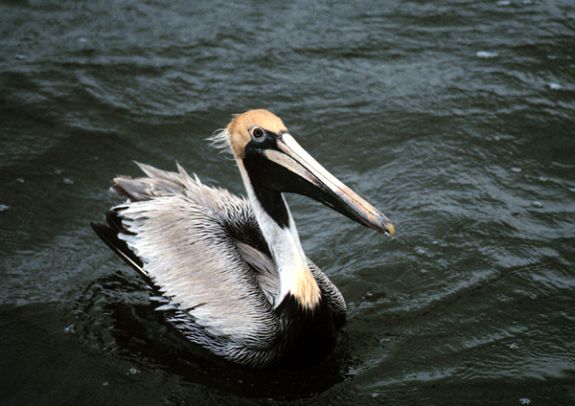 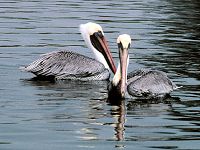 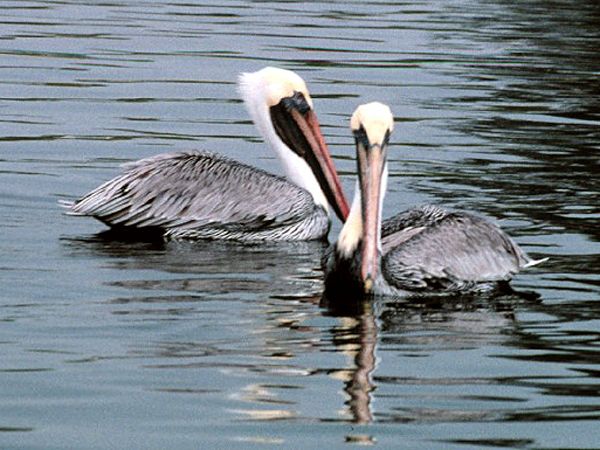 The California Brown Pelican is illustrated on The Wave’s, a mosaic tile mural, Rios de la Vida (Rivers of Life). The fountain, mural, and accompanying graphics illustrate the story of our Los Angeles and San Gabriel Rivers. Although not on exhibit in the Aquarium, this bird is included in our website animal database to expand on the information touched on in The Wave fountain exhibit.

A marine pelican species, these birds can be found resting and roosting overnight on offshore rocks and islands, in bays and river mouths with sand bars, on jetties, pilings, and even boats along the Pacific coast. They normally feed within 8 km (5 mi) of land and are rarely seen more than 32 km (20 mi) out at sea. Nesting sites are carefully chosen, preferably on isolated islands and rocks that are free from mammalian predators such as feral cats, raccoons, and rats.

California Brown Pelicans have short legs with fully webbed toes, a large, bulky, oddly proportioned body, long dark bills, and a large gular or throat pouch. Although ungainly on land, they are graceful in flight and in diving from great heights.

Immature birds are dark grayish-brown with a light belly and a gray pouch. They attain adult coloration when they are about three years old. Adults are grayish-brown and have a dark belly, white head with a yellowish crown, and a white neck. Eyes are normally pale yellow. Adult colors change during breeding season. Chest and head feathers become golden, eyes blue, and the skin surrounding the eyes pink. The gray gular pouch turns bright red and the back of the neck chestnut-brown.

The diet of California Brown Pelicans consists primarily of surface-schooling fish such as Pacific mackerel, Pacific sardines, and northern anchovies. Anchovies are 90% of their diet during the breeding season. They forage for food mainly in early morning, late afternoon, or when the tide is rising. These birds first use their keen eyesight to spot fish which they catch by plunge-diving at a shallow angle as they skim over the water or by diving at steep angles from heights of 6-18 m (20-60 ft) in the air. The dives are forceful enough to stun fish 2 m (6 ft) underwater. Once prey is captured, pelicans point their bills downward to drain water, then tip them up to swallow the fish headfirst, repositioning the fish if necessary by tossing it in the air and catching it again.

This subspecies migrates along the Pacific coast from as far north as British Columbia to the Channel Islands, and islands in the Gulf of California and offshore of Baja to breed. They are colonial nesters, building their nests within touching distance of each other. The nests, built on the ground, on rocks, or in bushes, vary from mere lined scrapes in the ground to elaborate stick constructions. Females choose the nest site, males provide the materials, and females build the nests.

They are monogamous during the breeding season. In March or April usually three eggs are laid, one every other day. The eggs are twice the size of chicken eggs. Both parents incubate and care for the chicks. Pelicans do not have brood patches and instead use their heavily vascularized feet to provide warmth for the eggs.

After an incubation of about 30 days, bald, blind, and helpless chicks hatch in the order in which the eggs were laid. For about 10 days they eat regurgitated food that the parents deposit on the floor of the nest. Then, having become strong enough, they take the regurgitated food directly from their parent’s bill. Chicks first fly at about nine weeks and are independent at about 12 weeks. All chicks may not survive since the first-born chick often out-competes its siblings for food.

Clumsy on land yet graceful in flight, pelicans normally fly low over the water, soaring with occasional flaps of their wings. When there is no wind they take to the air by running over the water, beating with their large wings while pounding the surface of the water with both feet in unison. In groups they fly in formation, normally in single file but occasionally in a V-formation, with necks tucked back over their shoulders in an s-shape and bill resting on their folded neck.

Pelican pouches (known as gular pouches) have a number of uses. Used as dip nets to catch fish, they can stretch enough to hold about 11 liters (3 gallons) of water and fish, which is about 3 times the amount their stomachs can hold. They are used as temperature regulators. Pelicans hold their bill slightly open and vibrate the pouch to pass air over the surface of the pouch to cool off. They also use their pouch as a feeding trough for their chicks. Pelicans regularly exercise the pouch by tossing their head backwards over their body to stretch the pouch.

A network of air sacs in their body serves several functions. The air sacs cushion their body against the impact of diving and then enable them to resurface rapidly like corks. They also make their body and bones lighter. These birds do not have nasal cavities, and special air sacs substitute for their absence by moistening the air and helping to provide ventilation and cooling through heat loss and evaporation.

They are able to drink seawater without ill effects. Special glands located between their bill and eyes excrete the excess salt.

Pelicans have a lifespan of 25-30 years if they survive predation, starvation, pollution, entanglement, etc.

The greatest threat to survival of California Brown Pelicans is humans. In the past they were hunted for their feathers; nests raided for eggs; slaughtered in the thousands by fishermen who believed they were competitors; and then their reproductivity declined to almost zero due to the ingestion of fish contaminated with man-made DDT. This pesticide causes alteration in the birds’ calcium metabolism which results in thin egg shells and crushed eggs. Use of the pesticide was banned in many countries of the world including the United States beginning in 1970, but the ban is not world-wide.

California Brown Pelicans are fully protected but there are still persistent residues of DDT along areas of the southern California coast that continue to cause reproductive failures and new threats have replaced the old. Among them are a decline in food supplies such as anchovy and sardine populations, both from over-fishing and the effects of climate changes such as El Niño conditions; susceptibility to avian botulism resulting from eating polluted fish, such as occurs in the Salton Sea, one of the Pelican’s post-breeding resting places; oil spills in their feeding grounds such as occurred in January 2005 in southern California; disturbances in nesting areas that cause nest abandonment, such as use of bright lights by squid fishing boats; and entanglements with fishing lines and hooks.

California Brown Pelicans were removed from the Endangered Species list in November 2009, culminating a century effort to save them.

In the late 1900’s and the early 2000’s Pelicans were hunted extensively for their feathers that were used to trim women’s clothing, especially their hats. In 1903 in an effort to protect the birds by reducing the threat of plumage hunters to their survival, President Theodore Roosevelt, who had strong conservation ethics, designated Florida’s Pelican Island the United States first bird reservation. This was the first time the federal government had set aside land for the sake of wildlife and Pelican Island was the forerunner of what would become the United States’ national wildlife refuge system.

Marine predators such as sharks, salmon, and dolphin, play a part in the meal plan of California Brown Pelicans. The pelicans often rely on the actions of these predators to force schools of fish to the surface where they can catch them easily.

Of the seven or eight species of Pelicans found worldwide, two are native to North America—the marine Brown Pelican, Pelecanus occidentalis, and the fresh water White Pelican, (Pelecanus erythrorhynchos). The California Brown Pelican, a subspecies of P. occidentalis, is the smallest member of the pelican family. It is easily recognizable because of its famous pouched bill that inspired the limerick: that begins: “A wonderful bird is the pelican. His bill will hold more than his belican”. The limerick is true. A pelican’s pouch will hold 11 l (3 gal) of water and his stomach only 3.8 l (1 gal). Highly social and gregarious, pelicans rest, roost, and nest in colonies.