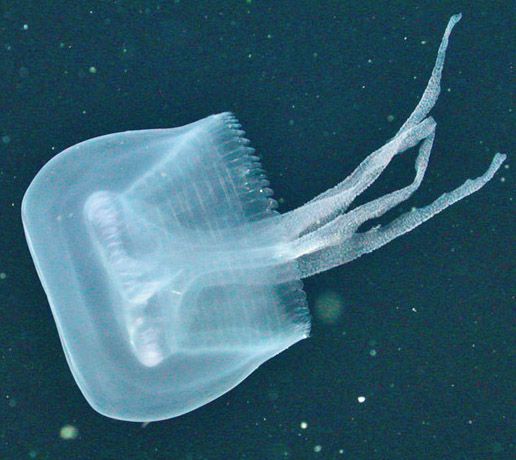 Photogaphed by a camera aboard a ROV during an exploration of the Gulf of California in 2003, the second geographic location of this jelly. | Used with permission of MBARI

Bumpy jellies are not currently on exhibit at the Aquarium.

Monterey Bay, California and the Gulf of California

“Bumpy” jellies are found at depths of 150-500 m (500-1800 ft). This depthe range, the mesopelagic zone, is below the level to which sunlight penetrates, but above the depth of very low oxygen levels.

The “bumpy” jelly is blue-white in color. It has a central bell or medusa with four oral arms hanging from the bottom center of the bell. Unlike many other sea jellies, it does not have tentacles. The exterior of the bell and the arms are covered with wart-like projections that contain clusters of white nematocysts, the stinging cells used to capture prey. These projections have given the jelly its informal common name, “bumpy”. The center of the jelly has a “stomach” and radial canals extending out to the edge of the bell to a circular canal that runs around the edge of the bell.

How the “bumpy” jelly feeds in the absence of tentacles was determined in laboratory studies of live specimens captured by the robotic arm of an ROV. Pieces of shrimp placed on the bell surface were first captured and held onto by the stinging nematocysts on the surface of the bell. The bell then moved the prey toward its rim where the food was transferred to one of its pairs of oral arms. The oral arms then guided the food to grooves in the arms from which it was transferred to the jelly’s mouth. The jelly seemed to prefer larger pieces of shrimp, often releasing smaller pieces.

Sexes are separate but little else is known about the reproduction cycle of this species. It is assumed that sperm and eggs are broadcast into the water column where fertilization takes place externally.

This jelly is an agile swimmer that moves gracefully through the water, trailing its oral arms behind, releasing stinging cells instead of dust or gas as a comet does.

Lacking nematocyst-laden tentacles with which to capture food, the “bumpy” jelly has evolved other ways to capture a meal which involve using the bell, oral arms, and the small wart-like, nematocyst–laden bumps to capture, hold, and transport prey.

Rarely seen, populations of “bumpy” jelly have not been evaluated.

To be as certain as possible, scientists waited 13 years from the time of discovery of S. ventana in 1990 until naming it a new genus and species in 2003. They wanted to observe as many S. ventana as possible. During this period, this rare jelly was only observed on seven explorations of Monterey Bay waters and twice in the Gulf of California, 4,828 kilometers (3,000 miles) away.

Even though the coast of California is well-studied, with two major marine research institutes, and many universities and colleges with marine science programs, little is known about this rarely seen jelly..

This sea jelly species that does not have an official common name, was discovered in 1990 by scientists exploring the deep ocean in Monterey Bay, California. Subsequently, photographs taken by a video camera on a remotely operated vehicle (ROV) and jellies collected by the ROV’s arm that were studied in a laboratory setting confirmed that this was a new jelly genus and species. In 2003/2004.It was named Stellamedusa ventana by the scientists who first discovered it.

Stella’ refers both to the jelly’s translucent blue-white color and its trailing arms, which, to the scientists, looked like a shooting star. “Medusa” is another word used for a jelly’s bell, uniquely shaped in the case of Stellamedusa ventana. The species name comes from the name of the ROV, Ventana.

The jelly’s unofficial or nickname common name, “bumpy” jelly, refers to the wart-like bumps or projections that cover the oral arms and skin (exumbrella) of the jelly’s bell.