| © Aquarium of the Pacific 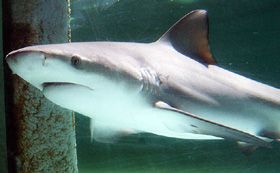 This shark is no longer on exhibit at the Aquarium of the Pacific.

Tropical and subtropical coastal waters worldwide. Also river systems and some freshwater lakes. Off the Pacific coast, bull sharks are found from Southern California (rare) to the Gulf of Mexico.

Bull sharks live in a variety of habitats—salty, shallow, coastal waters in depths of 1-150 m (3.3-492 ft); bays and harbors; low salinity estuaries, lagoons and river mouths; and freshwater lakes and rivers. Although they can spend long periods of time in freshwater, it is doubtful that they spend their entire lives in such a habitat. Juveniles stay in estuaries and shallower coastal waters, gradually venturing out into deeper waters as they mature.

Bull sharks are robust-bodied with a blunt, rounded snout. They have two dorsal fins. The first is large and triangular with a pointed or rounded tip. The second fin is about one third the height of the first fin. There is no skin ridge between the fins as is common in many other sharks. Their upper teeth are broad, triangular, and heavily serrated while those in their lower jaw are narrow, triangular, and finely serrated. The rounded eyes of these sharks are small compared to those of other gray sharks.

These sharks are countershaded. They are pale to dark gray on their upper bodies, fading to white on their undersides. The dark tips on the fins of juveniles fade as the sharks mature.

Their extensive diet includes many prey items: bony fishes, turtles, crustaceans, cephalopods, marine mammals, birds, mollusks, and almost anything else they find, including garbage. While juveniles prefer bony fishes, the preference of adults is for cartilaginous fishes such as rays and other sharks, especially juvenile sand sharks that they seek out in shallow nursery grounds.

They are solitary hunters, swimming sluggishly close to the bottom until prey appears. Then they can accelerate to a swimming speed of 19 km/hr (11.8 mph). They rarely show themselves at the water’s surface.

On the east coast of the United States, bull sharks migrate as far north as Massachusetts when the waters are warm, returning south to subtropical and tropical coastal waters as the water becomes cooler. They also migrate from the ocean up freshwater rivers in several areas of the world.

Bull sharks are a rarity among sharks, in that they can tolerate great variations in water salinity, ranging from marine to brackish to fresh. Migrating back and forth among these waters, the gills, rectal glands, blood, hormone system, and kidneys of these sharks are involved in a complex process called osmoregulation. They cope with freshwater by lowering the urea content in their tissues and removing excess water from their bodies as very dilute urine.

Females are believed to have a lifespan of about 16 years and males, about 12.

Bull sharks are categorized as low risk/not threatened on the IUCN Red List. However, because of their habitats in areas heavily impacted by human activity, destruction of their nursery grounds by development, target and bycatch in many inshore fisheries, and popularity as a recreational fish, they may move to the threatened list.

Bull sharks are well known for their ability to live in salt, brackish, and freshwater. Single individuals are found in the brackish water of the Indian River system, 3000 km (1864 mi) up the Mississippi River to Illinois, and as far inland as 3,500 km (2175 mi) up the Amazon. Populations are found in several lakes, among them Lake Nicaragua, where they breed and were once thought to be landlocked. However, it has been determined that they find their way to the Caribbean via rivers and estuaries.

The bull shark has numerous common names, many depending on its geographic location. Among these are Ganges shark (India), Nicaragua shark (Central America), Swan River whaler (Australia), and Zambezi River shark (Africa). Other names include the shovelnose, freshwater whaler, square-nose, river, slipway, ground, and cub shark.

In comparison to the streamlined look of most other sharks, bull sharks have a massive and stocky appearance because of their much wider body in relation to their length. Their common name comes from their short blunt snout which is said to resemble that of a bull. In company with the great white and tiger sharks, they are one of the top three sharks implicated in unprovoked fatal attacks throughout the world. They are considered by many to be more dangerous than the great white because of their preferred habitat—shallow shoreline areas and river mouths, where there is human activity.

They are common in the Gulf of Mexico waters off Florida’s coast.