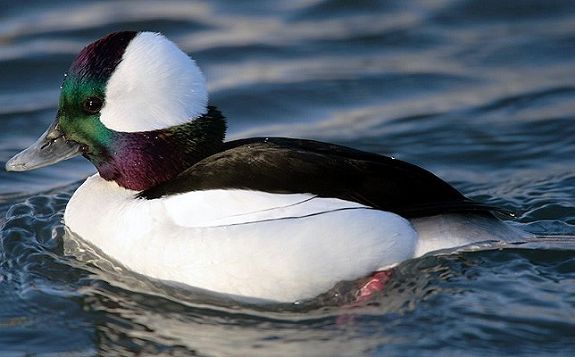 Buffleheads are illustrated on the mural wall of the Shorebird Sanctuary Ecosystem.

In the summer these ducks prefer small lakes and ponds with surrounding woodlands of aspen and poplar trees. In the winter they may be found inland in ponds, small lakes, and rivers, and in coastal marine environments in protected waters such as sheltered coves, lagoons, bays, and estuaries.

Buffleheads have small chubby bodies, short wings, a relatively large head, and small beaks. They are sexually dimorphic in both size and plumage coloration. Males are slightly larger than females. Breeding males have glossy, dark purple-green heads with a large white patch extending from just behind the ears all the way to the back of the rounded head. They have black backs and white underparts. Their wings are black with a large white patch on most of the inner wing. Females are darker with a dark brown head, back and wings, and pale gray underparts. They have a small white cheek patch. The white patch on the inner wing of the wings of females is much smaller than on the male. Non-breeding males resemble females. Juveniles are grayish-brown with small indistinct check patches.

In their freshwater habitats in the summer, they feed primarily on aquatic insects, such as dragonflies, damselflies, and their larvae. In their marine habitats in the winter, they feed mostly on clams, snails, shrimps, amphipods, isopods, and occasionally on small fishes. They also feed on submerged vegetation including the seeds of pondweeds and bulrushes. Ducklings eat aquatic insects.

Buffleheads dive to find food, sometimes forming small flocks in which some birds dive in search of food, while others stand guard, alert for possible dangers. A dive may last about 12.5 seconds. They swallow their prey underwater.

Buffleheads breed after their second year. They form monogamous pair bonds during the winter and spring that may last for several seasons. Most pairing occurs during the yearly spring migration back to the same breeding territory where the female hatched. Courtship displays, characterized by energetic and abrupt movements, occur throughout the year, increasing in the spring. The male does head-shakes, head-pumps, wing-lifts, and head-bobbing during flyovers and on the water. He may also water-ski, a movement in which both his feet and plumage are visible as he skirts across the water. He may make his head appear larger by erecting his crest. He drives other males away with wild displays of splashing. Males may make a low squeaky whistle while courting.

These birds nest in aspen and poplar trees around small lakes and ponds, typically within 25 m (82 ft) of water. They find a cavity in the tree about 1.5-6.1 m (5- 20 ft) above the ground. While nest searching, the female utters a harsh guttural sound. The most common place for a nest is in a small hole 5.7-7.6 cm (2.2-3.0 in) in diameter and 25-37 cm (9.8-14.6 in) in depth that originally was excavated for its own nest by a Northern Flicker, Colaptes auratus, or less commonly, a Pileated Woodpecker, Dryocopus pileatus. The female lines the nest with feathers and down from her breast. She lays 6–11 buff colored or light green eggs, an egg each 1-3 days for one to two weeks. The male leaves the female after the last egg is laid. She incubates the clutch for 28-33 days.

The eggs all hatch on the same day. The downy precocial ducklings remain in the nest for 24-36 hours. Coaxed by the female, they jump from the nest and she then leads them to water. She does not feed them but protects the territory as they find their own food. The ducklings fledge at 50-55 days.

While the females tend to the nests and ducklings, the males go off to molt at their summer lakes. Some females abandon the ducklings at five to six weeks before they are ready to fly, joining the male at the molting site. Others stay with their brood until they fledge and then fly off to molt. When the ducks molt, they lose their flight feathers and remain flightless for about three weeks.

Bufflehead flocks usually consist of less than 10 birds. The birds are always in motion, diving, preening, and courting. They are excellent divers, disappearing swiftly under the water, swimming by using their feet and wings to move through the water, and then suddenly popping up to the surface again.

Buffleheads prepare for their fall migrations by eating enough to store more than a quarter of their body weight as fat reserves to be used for fuel. They store up to 115 g (4.1 oz) of fat reserves. Traveling mostly at night, they fly high over land and low over water.

In the late 19th and early 20th centuries, hunting significantly reduced Bufflehead populations. Even today as many as 162,000 are shot by hunters each year. In spite of this, it appears that their numbers are not a cause for alarm.

Bufflehead populations may be impacted by clearing suitable nesting trees such as aspen for agriculture and commercial logging. Wintering birds may be impacted by toxins in heavily industrialized areas, particularly near the east coast. Some scientists studying the impacts of sea level rise due to global climate change believe that the coastal habitats where Buffleheads winter may be impacted when global warming causes a rise in sea level increasing the amount of salt in a habitat.

Since the restoration of the tidal flow at the Bolsa Chica Ecolological Reserve in Huntington Beach, California, the population of wintering Buffleheads has increased markedly.

The Bufflehead is one of the fastest waterfowl and can achieve flight speeds of up to 77 kph (48 mph) with its rapid wing beats.

Unlike most diving ducks, Buffleheads can take flight almost directly from the water without having to run across its surface to build up enough speed to take off.

Buffleheads, migratory birds, are North America’s smallest diving duck. Although small in body size, the relatively large head of these ducks is the source of their common name which is derived from ‘buffalo head’. These very energetic, fast-flying birds spend time in fresh, brackish, and salty waters.