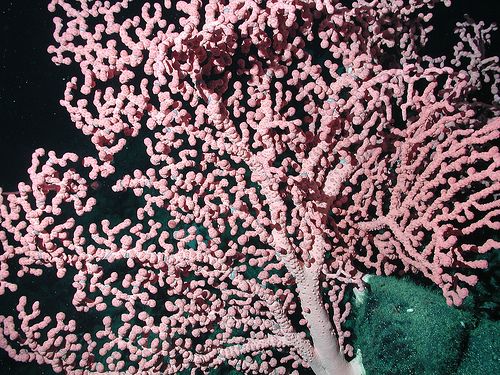 the "tree-like" structure of this gorgonian fan. | Courtesy of NOAA 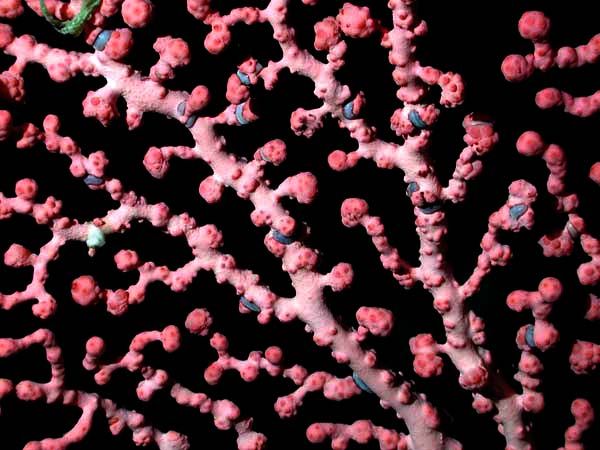 A closeup of the 'bubblegum" polps. \. Observe the blue scale worms on the fan.

Bubblegum coral is not currently on display at the Aquarium.

North Pacific and north Atlantic regions of the World Ocean.

Bubblegum corals are generally a deep-water species, inhabiting depths from 200-1300 m (650-4200 ft). Like tropical corals, they also may become a habitat for other marine organisms.

This genus of bubblegum corals consist of individual tiny polyps that have eight tentacles and form colonies. The colony is supported by an internal central skeleton consisting of tightly grouped calcareous spicules (needle-like skeletal parts). The flat and branching growth pattern creates the resemblance of the colony to a fan. Colonies of this sea fan species can be red, orange, or white in color.

These corals do not harbor symbiotic zooxanthellae, instead they are suspension or filter feeders. The eight tentacles on each polyp capture prey, primarily plankton, drifting by. They require strong currents to supply enough food to sustain them.

Like most soft corals, the bubblegum coral reproduce by ejecting sperm and eggs into the water column where fertilization takes place.

While other corals generally lock onto some hard object, sea fans like the bubblegum coral anchor themselves into the mud or sand. Most sea fans are nocturnal and only extend their polyps during the night.

Numerous animal species are known to use red tree corals as both food and habitat. Economically important rockfish, shrimp and crabs hide among the branches, seeking protection. Crinoids, basket stars, anemones and sponges attach themselves to dead branches so they can better collect food from nutritious currents. Other animals, such as sea stars and snails, feed directly on the corals themselves.

Just as the age of a tree is estimated from rings in the trunk, rings in the stalks of bubblegum corals are used to estimate age. These corals may live hundreds of years.

In order to assure that they are able to catch as much prey as possible, the bubblegum coral is able to grow in response to water movement.

Paragorgia arborea is a cold-water branching gorgonian fan. The common name for this soft coral, bubblegum coral, comes from the bundles of polyps at the end of the branches that resemble a wad of bubble gum. Unlike most other corals that attach to rocks or similar structures, these corals attach to the sea floor, growing upward and branching outward like a tree. They form one of the largest branching gorgonian coral colonies.