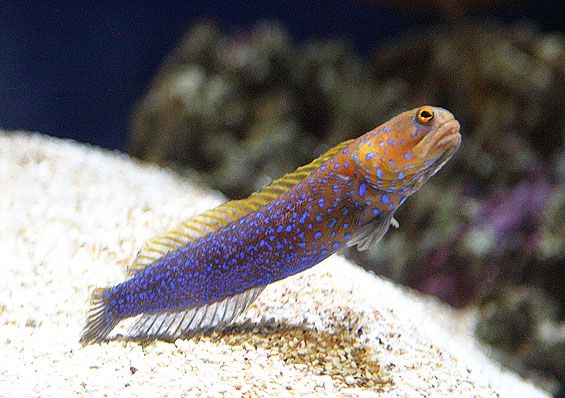 Jawfish in the Aquarium's garden eel exhibit. | Andrew Reitsma, Aquarium of the Pacific

These fish are not currently on display at the Aquarium.

Sea of Cortez (Gulf of California)

Bluespotted jawfish are usually found on the ocean bottom at depths of 18-24 m (60-80 ft), near cliff bases or rocky outcroppings of offshore islands. Juveniles can be found in waters sometimes as shallow as 4.6 m (15 ft).

Bluespotted jawfish have squared heads, eel-like bodies, big mouths and long, continuous dorsal fins. Their eyes are overly large for their body size. Their heads are yellowish-brown, blending to a darker almost black body covered with blue spots. Their dorsal fins are yellow. Juveniles are yellow and do not have spots.

This species sticks just their head outside their burrow, sits at the mouth of it, or hovers over the burrow to catch floating zooplankton.

At new or full moons during the spring through fall breeding season, the front half of the almost black body of males changes to white. They perform a special mating display in which they dart up into the water column, hang motionless with all fins erect for a few seconds, then dart back into their burrows, repeating the display every few minutes. These displays can go on for hours. An interested female eventually leaves her burrow and follows the male back to his burrow or to a separate breeding burrow to lay her eggs, which the male then fertilizes.

Jawfish are mouth-brooders. Males generally have larger mouths than females adapted for this purpose. The male gathers the fertilized eggs, which are held together with mucous threads, into his mouth and carries them until they hatch. The only time the incubating eggs are spit out is when the male has to eat and then he carefully places them inside the burrow away from predators. When the eggs hatch and the fry are released, and his mouth is once more empty, the male is free to repeat his mating display.

Bluespotted jawfish are normally found living in large colonies of several hundred individuals. Both males and females dig burrows, which are spaced 1-3 m (3.3-10 ft) apart and can be as much as 30 cm (1 ft) deep. Every night these fish build covers for their burrows, and every morning they rebuild the openings again. They clean and repair their burrows, shoveling sand out almost constantly. They line the burrow tunnel with pebbles and shell fragments. These are also used to reinforce the roof to keep it from caving in. They stay in or very close to their burrows, defending their territories from intruders and their burrows from other thieving jawfish.

The powerful jaws of the bluespotted jawfish have been adapted for use as a tool to scoop up sand, coral rubble, broken shells and pebbles to build their burrows. They are not above stealing supplies from a neighbor’s burrow to avoid work.

These small fish are subject to predation by larger fishes. They are not large enough to be marketable for food, but do have some value in the aquarium trade.

They are not included in the IUCN Red List.