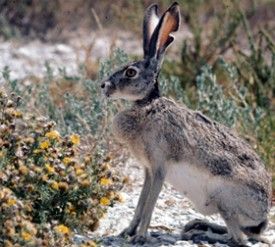 The black-tailed jackrabbit is illustrated on The Wave’s mosaic tile mural, Rios de la Vida (Rivers of Life). The fountain, mural, and accompanying graphics illustrate the story of our Los Angeles and San Gabriel Rivers. Although not on exhibit in the Aquarium, this land mammal is included in our website animal database to expand on the information touched on in The Wave fountain exhibit.

Throughout the southwest United States, north into Washington, Idaho, Colorado, and Nebraska, west into California and Baja California, Mexico, and into northern Mexico.

The preferred habitats of black-tailed jackrabbits are valleys and flat, open country such as desert brushlands, meadows, prairies, farmlands, and dunes. They like the areas to be dry and with short grass. They use many different types of vegetation and are often found in agricultural areas where they can impact fruit and grain crops. Jackrabbits often inhabit pastures that have been grazed by livestock.

Although the black-tailed part of the black-tailed rabbit’s name is correct in that its tail is black, the rabbit part is not. These animals are hares, not rabbits. Several factors distinguish hares from rabbits. Hares have a leaner body and longer ears and legs, usually do not build nests, and their young are born well-furred with their eyes wide open. Three species of hares are native to California, the snowshoe, black-tailed, and white-tailed. The latter two are commonly called jackrabbits. Black-tailed are the most abundant and widespread of all the jacks and the only one found in desert habitats.

Jackrabbits are strict herbivores whose diet varies depending on the time of the year and their habitat. In summer months they eat cacti, sagebrush, mesquite, alfalfa, clover, other grasses, and herbaceous vegetation. In fall and winter when this food is not available, their staple diet is dried vegetation and the young bark of woody plants. They forage for food from dawn and through the night, consuming large quantities relative to their size.. Black-tailed jackrabbits do not require much water and obtain nearly all they need from the plant material they consume. Those living in the desert obtain most of their moisture from water-retaining plants such as cacti.

These jackrabbits reach sexual maturity in the breeding season following their birth. Mating takes place year round and is preceded by courtship activities that include both sexes leaping and chasing after and behaving aggressively toward each other. Each year from one to six (usually three to four) litters are produced. Because the leverets (young rabbits) are active at birth, elaborate nests are usually not built. Birth takes place on the bare ground or in a grass and fur-lined depression called a form among grasses or under low shrubs. The doe (female) obtains the fur from her breast.

After a gestation of 41-47 days one to six (usually four) leverets are born. At birth they weigh about 100 gm (3.5 oz) and are open-eyed, well-furred, and active. The doe may move each of them to separate areas to protect the entire litter from being predated at one time. Also as a protective measure, she keeps her distance from her young, visiting only once or twice a day for 10 minutes at a time to nurse them. At 10 days of age the young begin to take solid food and they become independent when a month old.

Black-tailed jackrabbits spend most of their day resting in shallow, body-sized depressions that they scratch in the ground at the base of shrubs or clumps of shaded tall grass to get protection from the summer’s hot sun and winter’s chilling winds. They maintain trails between their resting and feeding areas. Although usually most active from dusk to late in the night, no matter the time of day, they always seem to be on guard and alert for potential predators in the area. Remaining still, they may move their ears to catch sounds. Attacked by a predator, they defend themselves by kicking with their hind feet, biting, and shrieking loudly. They alert other jackrabbits in the area to potential danger by flashing the white underside of their tail and thumping their hind feet to give a danger signal.

The huge ears of jackrabbits enable them to regulate their body heat by increasing or decreasing the blood flow through their ears which helps them to absorb heat or cool off when temperatures in their environment change. This is called thermoregulation. Their eyes are situated on the sides of their head, a position that gives them all-around vision, enabling them to spot danger coming from any direction. The coloration of their fur, brown with black tips, provides camouflage against the brush, letting them blend into their surroundings during their day sleep.

The long back legs of these jackrabbits give them the ability to run at high speeds to escape from danger. They are able to reach speeds of 56 km/hr (35 mph) and can jump about 1.5 m (5 ft). Pound for pound they are the long jump champion. The soles of their feet are covered with fur which cushions them on hard ground and insulates them from the scorching heat of hot desert sands.

Jackrabbits may live to be six to eight years old; however, they are regularly hunted by large birds of prey such as eagles and hawks, foxes, bobcats, coyotes, badgers, weasels, and humans.

Black-tailed jackrabbits are not listed as threatened or endangered. The white-tailed jackrabbit, Lepus townsendii is listed as a species of special concern by several states including California. Habitat availability is threatened to some extent by development and in some areas populations are dwindling. Their large numbers in orchards, agricultural fields, and rangelands can do considerable damage and ranchers and farmers often need to cull the populations.

Populations of black-tailed jackrabbits undergo drastic fluctuations with numbers peaking every six to ten years. In some years more than 90 percent of western populations die from tularemia, which may or may not be related to the population changes.

Black-tailed jackrabbits eat their own droppings to obtain the vitamins and fatty acids necessary to their well-being. Unlike most other mammals, they produce two types of pellets, one of which, cecotropes, is re-digested. Cecotropes are produced in a portion of the animal’s digestive track called the cecum and are eaten as they emerge from the anus. Bacteria and fungi in the hare’s cecum are the source of the essential nutrients the jackrabbits cannot produce but need and acquire as a result of the second digestion.