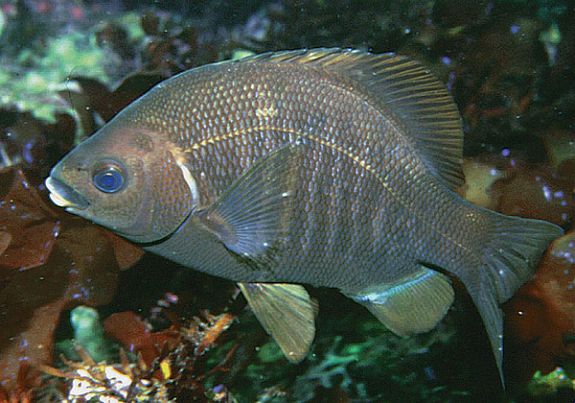 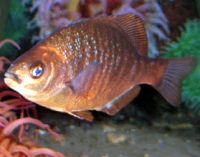 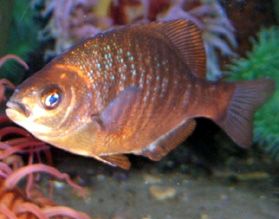 The Aquarium habitats for black perch are the Amber Forest in the Southern California/Baja Gallery and the Shorebird Sanctuary.

Black perch are common inhabitants of shallow rocky subtidal areas. They prefer kelp forests for a habitat but they can also be found around piers, over sand, and in estuaries where there is eelgrass.

These perch feed during the day preferring gammarid amphipods as prey. The amphipods are located on algae and ‘turf’. Turf is a low lying matrix of plants and colonial animals that often covers rocky substrates. Black perch also prey on crabs, brittle stars, and worms. Most feeding is over hard bottoms such as pilings and rock and occasionally over sand.

Black surfperch scoop up large amounts of substrate in the mouth and then use special muscles in the throat to separate out ingested prey food from non-nutritive debris. Prey is swallowed and the unpalatable material is spit out in a cast. This eating behavior is called winnowing. The ability to winnow does not develop until the perch are about a year old. Young black perch pick at their prey to sort out the smaller sized items that are easier for them to swallow.

Males and females mature when they are 1-2 years old or at a length of 15 cm (6 in) long. Like all surfperch, black perch are viviparous. Spawning take place primarily in the spring in southern California and in the late summer-early fall in central California. There may also be year-round spawning in some southern California areas. The male fish approaches the female from below. Both swim together for two or three seconds, separate, and then come back together again. This ’dance’ can be repeated several times. Internal fertilization is aided by a thickening in front of the male’s anal fin. This ‘nipple’ is used to transfer milt into the female. The female surfperch stores the male’s sperm in her body until the ova are mature (sometimes up to 6 months) before fertilization takes place.

The number of young a female produces at one time increases as she ages. A four year female will produce about 30 young. The fertilized eggs are incubated and hatch prematurely inside the female’s body. The female continues to carry the developing embryos for as long as 12 months. Nutrients and gases are exchanged through he female’s ovarian walls and the embryo’s vascular fin membranes and hind gut regions. The young are 54-61 mm (2.1-2.4 in) long and fully developed miniature replicas of the adults when they emerge from the female.

Black surfperch are either solitary or are found in small groups. They prefer a water depth of about 0.9 m (3 ft) but do swim from subtidal waters to depths of about 24 m (80 ft).

Black perch, especially juveniles, are often found swimming in the surf. Their strongly compressed body structure is important to their being able to withstand the surf’s rough action.

These perch have been observed changing color to match their environment. They camouflage by becoming lighter over sand and darker when in kelp.

Although the commercial fishery is small, black surfperch are an important recreational fish. They are taken by anglers fishing at piers, jetties, and rocky shores. They are preyed on by harbor seals and Brandt’s and Double-crested Cormorants.

The black perch’s species name, jacksoni, is derived from that of A. C. Jackson, the individual who, in the nineteenth century, first made the observation that surfperches gave birth to live young.

Small black perch are cleaner fish. They remove parasites from the skin of other fish.

Black perch are also called black surfperch and butterlips. In spite of their name, black perch, these fish are rarely, if ever, black. Their coloration can be orange, red, gray, green, various shades of brown, and other colors.