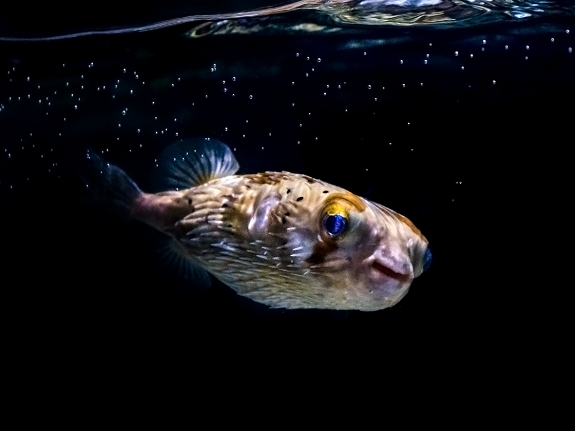 East and west coast of Africa, through the Indo-Pacific region, Japan, Australia, Equatorial Islands, Hawaiian and Easter Islands, Southern California, Gulf of California, to Colombia and the Galapagos Islands. Canada to Brazil including Florida, Gulf of Mexico, east coast of Mexico, and Caribbean Sea.

Adults of this species tend to prefer coral and rocky reefs, mangrove areas, and muddy, sandy and grassy flats. Mostly a relatively shallow water fish, they have been reported to a depth of 200 m (656 ft). Juveniles maintain an open-water, near surface habitat, frequently taking shelter in rafts of sargassum or other types of seaweed.

A uniquely shaped fish, this species, along with many other puffer species, might be described as a football with a tail. Its body is robust, round in cross section with the head and most of the body the same diameter tapering to the caudal peduncle and relatively small caudal fin. The face is flat except for the protrusive lips that are supported by large, fused, front teeth that form a heavy beak-like structure. Its eyes are large and set well forward on the head.

The background color varies from tan to light brown with darker brown blotches scattered over its body and with black spots interspersed. An identifying characteristic is a brown patch above and below each eye.

Probably the most impressive feature is the long, sturdy, very sharp spines that normally lie flat on the body surface but stick straight out when the fish inflates its body with water or air. These spines are actually modified scales.

Ballonfish are primarily nocturnal. Most of their feeding takes place at night. Their fused teeth are designed to impose heavy crushing forces and as might be expected their diet consists primarily of a variety of mollusks, mostly gastropods, and other hard-shelled animals such as sea urchins and crabs, especially hermit crabs.

These fish are broadcast spawners. The males slowly push the females toward the water surface where both immediately spawn. The eggs float for about four days until they hatch. Hatched larvae are well developed, exhibiting mouth, eyes, and swim bladder. By three weeks after hatching the fins and teeth have formed and the larva is well on its way to becoming a juvenile.

The time that juveniles leave their open-water, near surface habitat, may vary depending upon location. The juveniles may be over 450 days, at a length of 6-9 cm (2.3-3.5 in), before they migrate from their pelagic home, sometimes in huge schools, to the inshore areas where they will settle and grow into adults.

Adults are mostly solitary, but on occasion, juveniles and young adults may form aggregations or schools.

A unique characteristic of pufferfish in general is their ability, when threatened, to take in water or air and expand their bodies up to two or three times normal size. D. holocanthus inflates to a spherical form with the long spines sticking straight out from the body, creating a very unappetizing object that tends to discourage interested predators. They will also sometimes change color during periods of stress.

During daylight they find sheltered areas such as caves, crevices and outcroppings for protection.

Balloonfish are nocturnal and spend most of the night hours seeking food. Their large eyes are an adaptation to their nocturnal life style, giving them the ability to ‘see in the dark’ as they forage for food. While the ability to inflate the body may seem to be an adaptation, there is documented evidence that primitive forms of this species were able to inflate.

The egg and larval forms of this species are subject to predation by plankton feeders. Juveniles still residing in their pelagic habitat become food for a variety of open water species such as tuna, dolphinfish, and wahoo. Adults are probably less subject to predation. It is reported that the only known predator of adults of this species in Hawaii is the tiger shark.

Balloonfish are a hardy species popular in the aquarium trade. They are easily collected and readily available from retail and online tropical fish dealers. Inflated dried specimens are commonly found in tropical curio shops.

It appears that this species in not in danger at this time. It is a prolific spawner and adapts to a variety of habitats. It is not listed by CITES or by the IUCN Red List.

The balloonfish, also known as the spiny porcupinefish and spiny puffer, ranges worldwide in tropical waters and some subtropical and temperate areas. It is a member of the family Diodontidae, the spiny puffers. This fish, along with its close relatives, has the ability to inflate its body by taking water or air into portions of its digestive tract, increasing its diameter size by as much as three times. When the body expands, long spines that normally lie flat on the body are erected, not only adding to the apparent size, but also creating a formidable weaponry to discourage attack by most would-be predators.