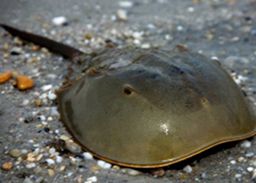 Because of the role they play in protecting human health, horseshoe crabs have been on view in an exhibit next to the Molina Animal Care Center.

East coast of North and Central America from Nova Scotia to Mexico’s Yucatan Peninsula, including part of the Gulf of Mexico.

In the spring and summer these crabs are usually found in the sand or mud flats, estuaries, and mangrove swamps. In the winter they are found at depths to about 30.5 m (100 ft).

The horseshoe crab has a horseshoe shaped hinged, hard shelled body that is divided into three parts; the carapace or head region, middle abdominal region, and the telson tail). Its upper side is smoothly curved. There are six pairs of appendages on the underside of the carapace. The first pair is used to pass food into the mouth. The second pair is the walking legs. In males they are tipped with the claspers that are used during mating to hold onto the female’s carapace. The remaining four pairs of appendages are also used in locomotion. The middle abdominal region has six more pairs of appendages. The first contains the genital pores and the other five are modified plates called book gills. The color of these crabs ranges from light brown to black.

Female horseshoe crabs can reach 60 cm (2 ft) in length and weigh up to 4.5 kg (10 lb). Males tend to be about 20 percent smaller. As their body size increases, the crabs shed their too small exoskeleton (shell). Males molt about 16 times over a nine year period and females, 17 times over 11 years.

Spawning occurs in late spring or early summer at high tides typically during new and full moons. Adult crabs migrate from deeper water to shallow flats or beaches in large numbers, females first. Females then secrete a pheromone to attract a male who uses the hook-like claspers at the tips of his first pair of walking “legs” to attach to the female, hitching a ride to the high tide line. Often other males will attach to the first male until a chain has formed that the female has to drag to the spawning area. The female digs four to five nests in the sand every few feet in which she deposits a cluster of as many as 3,600 eggs that are externally fertilized by the male. Following fertilization, the female covers the eggs with sandy. Tailless green, free-swimming larval typically hatch two to four weeks later. They settling to the bottom in about six days where 20 days after hatching, they molt for the first

Sexually mature crabs migrate annually from deep to shallow waters during the breeding season, not moving very far from the beach where they hatched.

Molting begins during the egg stage. Embryos moll four times at 4, 8, 11 and 13 days after egg fertilization. The next molting occurs 20 days after the larvae emerge. At each molt they grow about 25 percent in length. There are 16 molts in the male and 17 in the female before adulthood is reached. Occasionally, there is one more molt during a horseshoe crab’s life span.

The horseshoe crab has 10 “eyes” or light sensing organs scattered about its body from its head to and including its tail. It has one set of compound eyes like those of a fly, one set of simple, rudimentary eyes, and multiple photoreceptors on its telson. In spite of all these “eyes”, the crab’s vision is poor! Only movement is detected in the daylight and perhaps a blurry image by the compound eyes. At sundown, signals from the tail plus other factors give the crab improved night vision.

Numbers of horseshoe crabs are declining. These crabs have many predators, migratory birds, some species of sharks, loggerhead sea turtles, and sea gulls but their most serious predator is humans. Since the mid 1800’s large numbers of horseshoe crabs have been caught to be used for bait in the eel and conch fisheries, cattle feed, and fertilizers. The decline of horseshoe crabs on the Atlantic coast has led to state and federal regulations on their harvest. Delaware regulations require that that the crabs be hand captured and returned to the area in which they were caught. Also crabs may only be harvested for LAL. Harvesting for use as eel bait or fertilizer is prohibited. Other states bordering Delaware Bay have not instituted similar restrictions. Regulating harvesting continues to be a controversial issue among fisheries, environmentalists, the pharmaceutical industry and state regulators responsible for natural resources. Impacts of climate change may affect horseshoe crabs—loss of spewing areas due to sea level rise and ocean acidification’s affecting shell development. Horseshoe crabs have adapted to environmental changes for millions of years. Will they have time to adapt to climate change?

Predators other humans include some species of sharks, loggerhead sea turtles, sea gulls and migrating shorebirds. At the same time horseshoe crabs are spawning, huge flocks if shorebirds pause se in their migration from South America to northern breeding grounds as distant as the Arctic to feast on crab eggs.

Horseshoe crabs are often referred to as living fossils. There is some debate about whether these crabs should be called living fossils because of lack of anthropological evidence. The remains are usually preserving the structure of the hard body parts, and horseshoe crabs closely resemble the fossilized structures found in rock – many of them over several hundred million years. In that way, they appear to be living specimens of long dead, fossilized species. However, that is not to say they have not evolved at all since there is no evidence that changes may have occurred in the soft tissue and biochemical mechanisms that cannot be studied in typical fossils.

Horseshoe crabs live in ocean waters teeming with bacteria. Although they have no immune system, when injured, they are able to ward off infections due to a substance produced by the amebocytes in their blood that causes clotting of the wound. Scientists extracted this substance and develop a reagent called Limulus Amebocyte Lysate (LAL) for use in testing intravenous medicines, vaccines, and medical devices used in the treatment of humans and other mammals. The US Food and Drug Administration (FDA) now requires the use of the LAL test instead of the previous more time-consuming, less sensitive test that used rabbits to detect contamination.

The horseshoe crab is not really a crab. It is more closely related to scorpions, spiders, and mites than to true crabs, lobsters, and shrimp. It is often described as an armored box that moves or a blue blood living fossil” or ancient mariner because its basic body shape that has not changed in over 420 million year. It is a “blue blood” in the truest sense. Its blood turns blue when exposed to air due to presence of a copper containing molecule, hemocyanin. Hemocyanin carries oxygen in the crab’s its blood as hemoglobin does in humans.