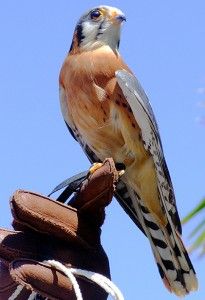 The Aquarium's American Kestrel. | © H. Ryono, Aquarium of the Pacific

Our American Kestrel which was donated to the Aquarium by the Living Desert Museum makes un-caged appearances in the Aquarium so our guests can get closeup views of his beak and plumage. His name is Orion from Greek mythology which tells about Orion, a giant and celebrated hunter who, after he was killed, was placed in the sky as a constellation. The constellation Orion is on the celestial equator.

The American Kestrel is also illustrated on the Wave’s mosaic tile mural, Rios de la Vida (Rivers of Life). The fountain, mural, and accompanying graphics illustrate the story of our Los Angeles and San Gabriel Rivers.

Throughout South America and south of the Arctic tree line in North America, with the exception of high mountains and tropical and temperate rainforests.

Preferring to hunt in open areas, these birds can be found in open fields, farmlands, pastures, marshlands, grasslands, canyons, borders of woodlands, deserts, and suburban areas with high, exposed perches such as trees, telephone poles, wires, and even giant cactus.

American Kestrels are small falcons. They have short, dark, hooked beaks, rounded heads, long tails, and long narrow pointed wings. The top of the head, (crown), is gray and they have white cheeks, blue-gray wings, and “eye spots” on the nape (back) of the neck. Their most distinguishing marking is two black “mustache marks”, one on each side of their face. They have large dark eyes and yellow to orange legs, cere, and eye-rings.

They are sexually dichromic, that is, males are more brightly colored than females. Adult females have a pale buff-colored breast streaked with brown and are rust-brown on their nape, back, and wing coverts (small feathers covering insertion points of larger feathers). Their back and wing coverts are heavily barred with black, as are their rust-brown tails which terminate with a narrow white band. Adult males have a rust patch on the crown and a rust nape, breast, back, and tail. They have a pale belly and blue-gray wing coverts. Their dark flight feathers terminate with pale spots, creating a “string of pearls” effect. They also have black spots on their wings and flanks. Their tail ends in a wide black border tipped in white, rust, or blue-gray.

American Kestrels eat a wide variety of small prey. Insects such as grasshoppers, crickets, and butterflies are a major part of their summer diet which also includes mammals such as mice, voles, young squirrels and rabbits, and shrews. Small birds, lizards, snakes, toads, and frogs are a small part of their prey items. In the north in winter months they eat mostly birds and mice. They are diurnal, usually hunting in the morning and early evening in summer and throughout the day in winter.

Foraging for prey, they hunt on the wing, flying with rapid wing beats and short glides over open country or circle above, often stopping in mid-air if they see something of interest on the ground. When a meal is spotted, they partially fold their wings, drop lower, and swoop to the ground to grasp the mouse or insect with their sharp talons. Then they fly to a perch where they swallow small insects whole or, holding larger prey with both feet, use their sharp beaks to rip and tear off pieces.

Breeding takes place in the spring (in California from April to June). Male kestrels display to attract females by climbing high, calling, then diving fast and steeply before climbing again repeatedly. Kestrels do not build nests. While they usually use tree cavities, holes in cliffs, and woodpecker holes as nurseries, they also may occupy abandoned nests of other birds, nest boxes, and even crevices of buildings. Males influence females in the selection of the nesting site.

Females lay three to seven cream, white, or pale pink 35 mm (1.4 in) eggs that can be splotched with brown. For the next 29 to 31 days the female does most of the incubation while the male hunts to feed her. He calls her to come out of the nest hole to eat. It takes three to four days for all of the eggs in the clutch to hatch. The chicks are born covered with down, but with closed eyes. Chicks do not compete with each other for food. At first they are fed by the female and later by both parents. They fledge when they are 28-31 days old. The fledglings return to the nest at night for about two weeks before becoming independent.

American Kestrels are territorial and normally solitary, except during breeding, migrating, or when taking advantage of a rich food source. In winter, males and females defend separate territories, and the sexes have different habitat preferences. Males defend habitat with dense vegetation, whereas females select more open areas. Both aggressively defend their territories against intruders.

In the fall birds that nest in extreme northern areas migrate south to the southern United States and Mexico for the winter. The rest are mostly resident, staying in their territories all year, some in pairs.

Female Kestrels are larger than males, a form of reverse sexual size dimorphism. Sexual dimorphism is morphological or genetic differences between sexes of the same species. This size difference in Kestrels may allow the same pair of birds to hunt two different ecological niches with different-sized prey. Also, females typically defend the nests and are better able to incubate their eggs because they are larger.

These birds have developed the ability to tolerate the high summer desert temperatures without needing a source of drinking water. They get moisture from their carnivorous diet of mice, birds, and reptiles.

It is believed that American Kestrels in the wild have a life span of 2 to 5 years.

The American Kestrel is still widespread and abundant. However, loss of open space due to construction has sharply reduced nesting and foraging habitat in some areas. Electrical lines, wind farms, collisions with vehicles, poisoning, shooting, and trapping are among the dangers for these birds. Researchers are now concerned that mobile phone antenna towers may be an added danger.

American Kestrels play a very important role in the control of “nuisance species” such as rodents and insects, major prey items in their diet. The designation of “nuisance” is generally used to refer to animals that, in the perception of humans, have become a nuisance as a result of the animal’s population density with large numbers causing associated negative human-wildlife or wildlife-wildlife interactions.

American Kestrels were formerly called Sparrowhawks because sparrows were believed to be their diet preference. These birds are the smallest, most common, and most colorful of North American falcons. Males are more brightly colored than females and females are larger than males. Because of their appetite for small rodents such as mice and squirrels, these small falcons play an important role of predators of so-called nuisance species. They are the only North American falcon that regularly hunts by hovering or kiting (sailing on the wind).