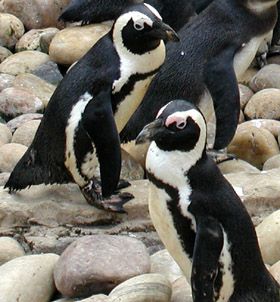 | Released to public domain by A.Pingstone

Information about this penguin, which does not have an Aquarium of the Pacific habitat, is provided because of public interest in these charismatic flightless birds.

These birds live in inshore coastal waters where the temperature is 5-20o C (41-68o F). They come to land to breed, molt, and rest. The 24 islands they inhabit are either flat and sandy with sparse to abundant vegetation or rocky with almost no vegetation. Their mainland sites are beaches with trees and shrubs and very close to human habitation.

Because of their large head, short, thick neck, torpedo-shaped body, and short legs, the body shape of African Penguins has been compared to that of a bowling pin. Their webbed feet are black and gray in color, and on land they walk with an awkward rolling waddle. Their wings’ wrist and elbow bones are rigid and, since they cannot be folded, they remain extended like arms. Scale-like feathers cover the surfaces of the wings.

The back and face feathers of these penguins are black. They have a white breast and belly with white feathers extending in a semicircular pattern behind and over the head. The chest and belly are speckled with a few black spots, the number and pattern of which are unique to each bird and are used for identification. A narrow black band extends across the chest and down the flanks toward the legs. There is a patch of bare pink skin above each eye.

Hatchlings are covered in a layer of gray fluffy down. Juveniles have blue-gray backs and a light belly. They do not have the white face markings or the black horseshoe shaped chest band that adults do.

Females become sexually mature at about three years of age and males at about four years. Breeding can occur at any time of year but more frequently occurs from March to May in South Africa and in November and December in Namibia. Breeding sites are on 24 islands between Namibia and Port Elizabeth, South Africa and at three mainland beach sites.

African Penguins are usually monogamous. When their bond is forming, they bray and flap their wings in unison. The pair generally returns to the same colony and often the same nest site. Ground nests lined with twigs, roots, or weeds can be shallow burrows dug in sand, under overhanging rocks or bushes, and even in open spaces (although the birds prefer places where there is some shade). Usually two eggs are laid, but commonly only one chick survives.

Both parents share in the incubation of the eggs with shifts of two to three days, the length depending on the foraging success of the bird at sea. The eggs hatch in about 40 days, and for the next 15 days, one of the parents constantly broods the chick. During this time the chick gains full control over its body temperature, losing its dependency on an adult for warmth. While one parent is brooding, the other is at sea foraging, usually returning in the late afternoon to feed the hungry chick partially digested regurgitated food. Adults continue to guard their chick for another 15 days after which they go to sea together to forage. Chicks left alone often gather together forming a crèche to reduce attacks from adults in the colony. Adults continue to feed their offspring until the chicks become juveniles and leave the colony to be on their own.

Chicks fledge, becoming juveniles, when they are 60 to 130 days old, at which time they lose their fluff and gain bluish-colored feathers. At this time they leave land and remain at sea for 12 to 24 months. Then they usually return to the land site where they hatched and molt into the familiar black and white plumage of adults.

Although clumsy walking out of the water and on land, penguins are very skillful swimmers. African Penguins swim an average of 7 km per hour (4.4 mi/hr) but can reach speeds of 24 km per hr (15 mi/hr). They swim by using their feet as rudders and their wings as flippers. They move their feet when swimming at the surface. Diving, they streamline their body by drawing the head into their shoulders and pulling their feet into the body. Compared to other Penguin species, African Penguins are shallow divers, usually going no deeper than 9 m (30 ft). They can stay under water for two to three minutes. Emerging from a dive, they may porpoise, a movement involving plunging in and out of the water to renew air in their lungs while continuing to move without interrupting forward motion.

In South Africa annual molting takes place from November to January, and in Namibia, in April and May. For five weeks before the molt, the penguins increase their food consumption from ounces of food daily to pounds so as to lay down about 30% more fat deposits in preparation for when they cannot swim to forage. The entire molt takes about 20 days with feather shedding lasting about 13 days of the 20. They lose up to half their body weight during the molt and become listless. After their feathers return, it takes the penguins about six weeks to regain their lost weight.

Penguins are ancient birds that are believed to have evolved from the time that dinosaurs became extinct. As they evolved they adapted well to cold water and cold land. Living in a subtropical climate where the land is warm but where a cold, current keeps the ocean water at 5-20o C (41-68o F), African Penguins have had to evolve ways to survive in cold water and in the heat of the sun.

Their feathers, shorter than those of their Antarctic relatives, are stiff and overlap in layers to trap air next to their skin for insulation. They waterproof their feathers by spreading oil from a gland at the base of the tail. They have many more feathers than most aquatic birds, about 300/2.54 cm2 (1 in2).

When overheated, blood vessels in their skin engorge with blood, bringing heat to the surface where it is dissipated. Bare patches on their feet and glands in the pink patches above their eyes allow excess heat to escape. The warmer they get, the pinker the patches get. They also pant and hold their wings away from the body to lose heat. They ripple their feathers to allow warm air next to the body to escape.

The life span of African Penguins in the wild is about 10-11 years of age; however, some have been known to live as long as 24 years. In protected environments such as aquariums and zoos their lifespan is longer.

African Penguins are listed on the IUCN Red List and the U.S. Endangered Species Act as endangered. Twenty-three of the 24 islands were they breed are listed by the government of South Africa as nature reserves and the mainland nesting sites are under the protection of the country’s West Coast National Park Service. Egg collecting and slaughter of birds are prohibited.

The population of African Penguins has collapsed from several million in the nineteenth century to 1.2 million in 1930 to an estimated 70,000 birds today. The numbers are still declining. The collapse is due primarily to human activities such as collection of eggs for human consumption (now prohibited); overfishing of sardines and anchovies (preferred food of the penguins); pollution from oil tankers as they round the Cape of Good Hope; removal of guano for fertilizer from the islands where they built their nesting burrows (now forbidden); competition of larger animals for breeding sites; predation by feral cats and Cape fur seals on the islands, Kelp Gulls, Gannets, and Strawnecked Ibis, and cats, dogs, and leopards on the mainland. The population is also affected by infection by mosquitoes carrying avian malaria and human development near their mainland breeding sites.

Today there is a nationwide breeding program among U.S. aquariums and zoos to ensure the survival of African Penguins in the event of a catastrophic event in their native habitat.

African Penguins are very efficient navigators. After months at sea they can find the way back to the nesting site where they were born or nested. Three African Penguins equipped with tracking devices and relocated, swam 1,287 km (800 miles) back to their home habitat in just one month.

In June 2000 a bulk oil carrier sank off Robben Island near Capetown releasing thousands of gallons of oil. This occurred at the time of the peak breeding season of the African Penguins nesting on the island. Over 18,000 birds became oiled and 19,000 others that were not affected were trucked 1,287 km (800 mi) to Port Elizabeth to get them out of harm’s way. An international force of volunteers descended on Capetown to rescue the affected birds. Among them was a volunteer sent by the Aquarium of the Pacific who had previous experience treating oiled penguins. The effort resulted in the rescue of 91% of the birds, a phenomenal achievement. And most of the relocated birds found their way back to the island.

The African Penguin is the only one of 17 penguin species that lives on the African continent and its offshore islands. This species has had several names: Jackass Penguins because their raucous squawks sound like the braying of a donkey; and Blackfooted Penguin, although its feet are black and gray. Endemic to Africa, the common name, African Penguin, describes them best. In Afrikaans the word for African Penguin is “brilpikkewyn” (pronounced bril as in brilliant-puh-kuh-vain), which means braying penguin.