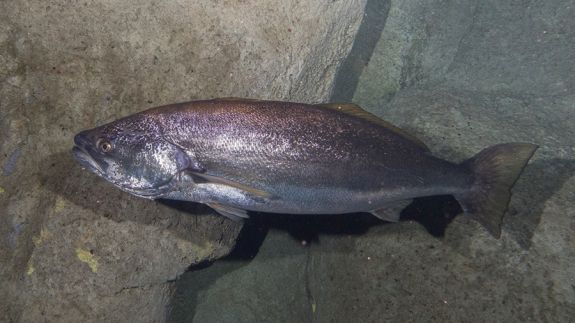 White sea bass can be found in the Honda Blue Cavern exhibit in the Aquarium’s Great Hall.

These fish live along the eastern Pacific coastline, from Baja California, Mexico, to Juneau, Alaska, and in the Gulf of California.

White sea bass are moderately elongate in shape and generally have a bluish or gray color on their dorsal side and silver-colored ventral side. They have a large mouth with a slightly protruding lower jaw. Two dorsal fins are present. The pectoral fins are attached to the thorax and are slightly posterior to the pelvic fins. Their fins have a yellowish color. White sea bass have a unique ridge that runs along their underbelly. Males and females are indistinguishable from one another. Juveniles have three to six dark vertical stripes and show countershading.

These fish are secondary and tertiary predators of small fish, including anchovies, sardines, and mackerel. They may also feed on mollusks such as squid, and marine worms, crustaceans, and other marine invertebrates. Juveniles feed almost exclusively on mysid shrimp.

White sea bass can mate up to five or six times per year. They can mate several times with multiple partners. There are no outward features to distinguish males from females. Mating takes place from spring to early summer. They are broadcast spawners, which means that eggs and sperm are simply released into the water column. Females can release as many as 1.5 million eggs per spawning. Eggs develop in the water column and after several months hatch into tiny fry. Once the eggs are fertilized, the adults do not provide any care or protection of the young.

Preyed upon by sharks, sea lions, and humans, the white sea bass has evolved cryptic coloration in the form of camouflage and countershading. Strategies such as schooling behavior and production of large numbers of offspring also increase chances of this species’ survival.

White sea bass can live up to twelve to twenty years.

White sea bass are listed as a species of Least Concern by IUCN.

The white sea bass is also known as white weakfish, California white sea bass, king croaker, or seatrout, among other names. The white sea bass is the largest member of the croaker family and belongs to a large order of perch-like fish. They are highly prized by both sport and commercial fishermen, causing populations to undergo drastic declines. To increase their numbers, fish hatcheries were introduced and strict limits were placed on how many individuals could be taken. Today the numbers have improved to the point that the white sea bass is currently listed as a species of Least Concern on the International Union for Conservation of Nature’s Red List.