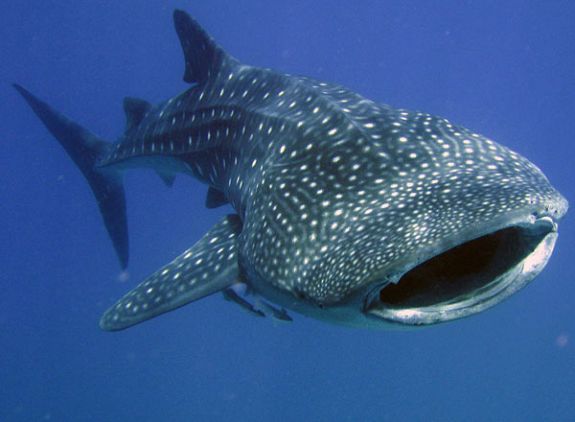 There is a year round population of whale sharks in the Maldives, the site of extensive research on these awesome sharks. | Maldives Whale Shark Research Programme www.maldiveswhalesharkresearch.org 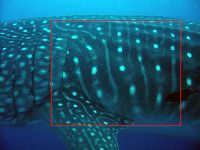 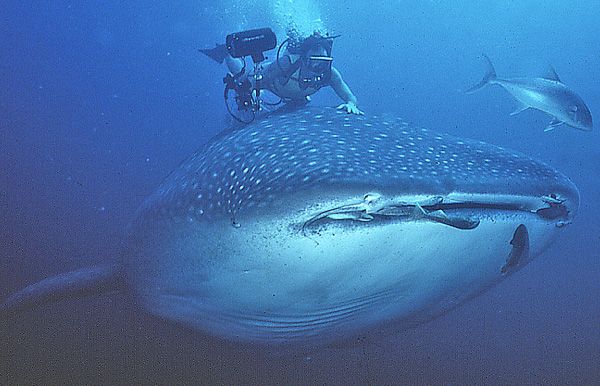 A gentle giant being "petted". 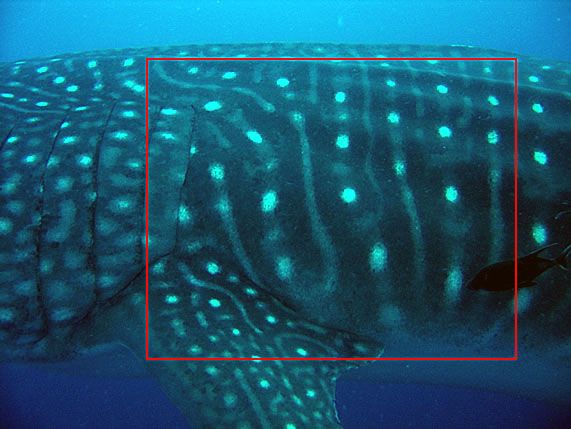 The awesome whale shark is not exhibited at the Aquarium. This information is available so you can learn more about the largest fish in the world and its conservation needs.

World wide in tropical and warm temperate waters most commonly between latitudes 30o N and 35o S in oceanic and coastal waters with the exception of the Mediterranean Sea. Reported in about 124 countries.

The whale shark is considered to be a pelagic open water fish, but it is frequently seen in shallower inshore waters associated with lagoons, bays, and coral reefs. It prefers warm tropical water, in a range of 21 to 25o C (69.8 to 77o F), but is more content when the warm water is interspersed with cooler, nutrient-rich upwellings that provide a good source of food.

The largest of the sharks, it is well proportioned and beautifully streamlined even with its large, broad, flat head. Its large mouth, which can be up to 1.5 m (4.9 ft) wide, extends the full width of the head. Unlike most sharks in which the mouth is on the undersurface of the head and set well back on the snout, the whale shark’s mouth is almost at the very front of its head. Short barbels protrude from its nostrils. It has a mouth full of small, sharp, almost scale-like teeth. Its relatively small eyes (about the size of a golf ball) are located a short distance behind the angle of the jaw and at about the same level. The spiracles are behind the eyes at a similar distance. Five large, vertical gill slits are present just forward of and above the origin of the pectoral fin. The two dorsal fins are placed well back on the body. The first dorsal fin is much larger than the second. The caudal fin is semi-lunate (semi-crescent shaped) with the upper lobe much larger than the lower. A very distinctive characteristic on each side of the upper body is the presence of three parallel, horizontally oriented ridges that start at about where the gill slits end and run the length of the body.

Coloration and color patterns vary from one shark to another. The underbody is white or cream colored. The sides and back have a darker base color with shades of blue, gray, and brown. Vertical and horizontal lines of cream or white create a checkerboard appearance with round spots in the squares giving the impression of checkers on a board ready for play. The dark shaded fins are irregularly marked with round, light colored dots.

Reports about size and weight vary considerably, probably depending on the mode and circumstances of measurement. A male specimen accidentally netted off of Bombay in 1983 was measured at 12.2 m (40 ft) and reportedly weighed 11 metric tons (24,250 lb). A larger specimen was reported from the Gulf of Siam and estimated at 18 m (59 ft), a questioned figure. Most whale sharks observed are 6 to 12 m (19.7 to 39.4 ft) in length. As is the case with many shark species, females tend to be larger than males.

It is interesting that the largest fish in the world utilizes small food items for its nutrition. Although its mouth is huge, its gullet is small and limits the size of prey that it can swallow. The whale shark is a filter feeder and its modified gill rakers can remove food particles from sea water down to 1 mm (0.039 in) in diameter, but most of its food comes in larger dimensions. Along with the small forms of phytoplankton and zooplankton that are caught in its filtering system it will also eat sea jellies, small crustaceans, squid, and small fishes such as anchovies, sardines, mackerel, and similar species.

The whale shark uses a feeding technique very similar to that of the large baleen whales. While the whales use baleen plates as strainers and whale sharks use gill rakers, both open the mouth wide, engulf a large quantity of water and prey, then close the mouth and force the water through the mucus coated strainers that hold food preparatory to swallowing.

This filter-feeding shark may feed passively by simply opening its mouth while it is swimming. It may also feed actively by jutting out its jaws, gulping water into its mouth, closing the mouth and forcing the water through the filtering system and out the gill slits. These sharks have been observed hanging vertically in schools of baitfish while sucking the baitfish into their mouths.

What the 300 rows of small teeth in each jaw do in the feeding process has not been definitely determined. Some biologists suggest that in instances when food is too large for the shark to swallow, the teeth may be used to process the food into a smaller, more manageable size.

Not a great deal is known about the reproductive process of whale sharks. Males, identified by the presence of a pair of claspers near the pelvic fin, appear to become sexually mature when they reach a length of 8-9 m (26.2 to 29.5 ft), but the size of females at maturity is not known. If, or where, there are specific breeding grounds is also a mystery. It is generally accepted that the species is ovoviviparous (aplacental viviparity), a method of reproduction in which eggs developed inside the female’s body hatch internally. The embryos have no placental connection to the mother, and are supported nutritionally first by the yolk sac and then by fluids called uterine milk secreted by villi in the internal uterine wall. When the embryos come to term, they are live born.

There is some evidence that the southeast waters off Taiwan and areas in the Philippines may be important birthing areas during the summer months.

There is much to be learned about the behavior of whale sharks. Although thought to be highly migratory, little is known about their migration habits or patterns other than that they seem to appear in certain places at certain times. Their movement has been attributed by some researchers to timing with plankton blooms and changes in water temperature. They are primarily solitary animals, but on rare occasions are observed in aggregations of 100 or more individuals. The reasons for the aggregations are not well understood.

They tend to spend most of their daytime hours cruising at shallow depths, apparently feeding, sometimes right at the water surface. During night hours and when they are swimming over distances they tend to go deep and have been recorded to 980 m (3215 ft), the maximum the instrumentation used could measure. They are slow swimmers usually moving at no more than 5 kph (3 mph). Their swimming pattern is different than most sharks in that instead of using just the caudal fin for primary propulsion, they use the full posterior two-thirds of their body length.

When approached by divers, whale sharks seem to be indifferent or mildly curious. They do not object to being approached by divers but it has also been reported that they are not especially accepting of direct contact and should not be touched. If a human remains in close proximity for an extended period of time, a shark will sometimes slowly make its way into deeper water.

The whale shark is well adapted to its environment. Its monumental size is its greatest protection and adults have little to fear from natural predators except for humans. It has a very efficient feeding mechanism and its somewhat opportunistic diet provides a broad base of food supply.

The size of an adult whale shark’s eye is about that of a golf ball, small for such a large animal. It has no eyelid or protective membrane. If the shark perceives the possibility of injury to an eye, the eyeball is rotated backward into the eye cavity and is covered by a flap of skin that slides forward over the opening.

The whale shark, along with other shark species, has a sixth sense provided by the presence of specialized nerve cells, located primarily in the head region, called the Ampullae of Lorenzini. These cells are sensitive to and can detect electromagnetic fields transmitted by other animals. These cells assist the shark in finding food at close range, even in poor visibility conditions.

Estimates of whale shark longevity vary from 60 to as long as 150 years, but the maximum age is really unknown.

Because of their size adult whale sharks have little to fear from natural marine predators, although observers have reported seeing scars that might indicate a large shark such as the white or tiger or even a killer whale might have attempted a larger meal than it could handle. Juveniles are subject to predation by larger fishes and sharks. One juvenile was found in the stomach of a blue shark and another in the stomach of a blue marlin. Orcas have also been mentioned as predators of juvenile whale sharks.

By far, the most serious threat to this species is from humans. The meat of the whale shark is considered a delicacy in Taiwan. It is marketed fresh, salted, and smoked and sells for very high prices. That fact plus the value of the fins, hide, liver oil and the cartilaginous skeleton all add up to a very high value per animal taken. There are a number of countries that permit the commercial taking of whale sharks and some fisheries target the species. They are occasionally taken as bycatch. Protected in a number of countries, they are frequently fished illegally because of poor or non-existent enforcement of existing regulations.

Whale sharks are exhibited in several aquariums worldwide. Swimming and diving with whale sharks in locations where their appearance is predictable has resulted in an ecotourism business in several parts of the world such as Western Australia, Bahia de los Angeles, Mexico, Belize, and the Philippines.

Populations have declined largely due to harpoon fisheries and bycatch. The whale shark is listed by the IUCN Red List as vulnerable. It is listed in CITES Appendix II. It is protected in Australia, the Maldives, the Philippines, and the United States.

A whale shark photo-identification library uses a software program that ‘analyzes’ photographs of the unique-to-each shark skin patterning behind the gills and any scars of an observed shark to distinguish between individual animals. The database helps researchers to learn more about these awesome and mysterious sharks such as population determinations, migratory patterns, breeding areas, etc.

One reason given for the unique checkerboard pigmentation of the whale shark is an adaptation for radiation shielding, an advantage in animals that spend a significant amount of time near the surface of the water where they are exposed to high levels of ultraviolet radiation.

Known as a deity in a Vietnamese religion, the whale shark is called CA Cong, which translates to “Sir Fish”.

The skin on the upper surfaces of an adult whale shark may be in excess of 100 mm (3.9 in) thick. It is highly valued for the production of high quality leather.

While its large size might suggest a dangerous animal, the whale shark is actually a gentle giant and will permit divers to approach it closely without exhibiting aggressive behavior. A strikingly handsome fish, its colors and markings are impressive and express an individuality that makes possible repeated identification of individual animals.