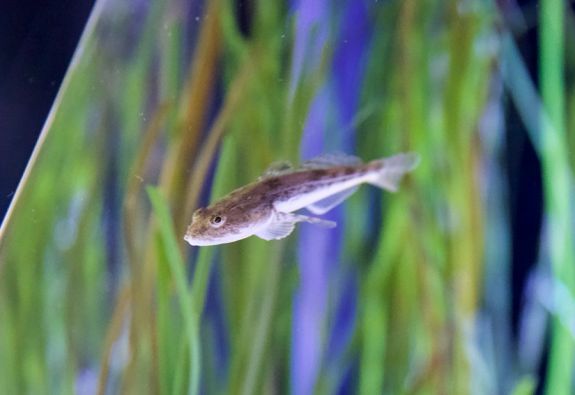 Tidepool sculpins are on view in the oyster exhibit in Pacific Visions culmination gallery on the second floor.

Tidepool sculpins are found in the North Pacific Ocean, from the Sea of Okhotsk and Bering Sea down the west coast of the United States to Los Angeles County, California.

This intertidal temperate water species lives in sheltered areas and is typically found in tidepools. They are able to tolerate both brackish and normal ocean water.

Tidepool sculpins may grow to a maximum length of 3.5 inches (9 cm).

These fish feed on small invertebrates such as worms and small crustaceans.

Tidepool sculpins mature in approximately one year. Summer is their reproductive season. The males use their pectoral fins to hold the female while fertilizing the eggs as she is depositing them on a surface. Fertilization doesn’t take place until the eggs are laid in seawater. Females typically lay several batches of eggs each year. No further egg guarding or parenting is done. The larvae are planktonic. After thirty to sixty days, they move back into rock pools and become juvenile fish. Tide pool crowding may affect their growth rate.

These fish are sedentary and solitary. If disturbed, they quickly propel forward with a snap of their tail to another hiding place.

Tidepool sculpins have a keen sense of smell. If removed from their home area, they are able to return to the area using their highly developed sense of smell.

These fish may live up to five years.

This species has not been evaluated by the International Union for Conservation of Nature.