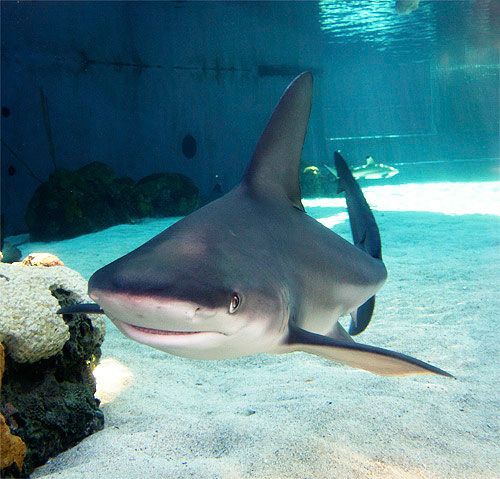 Our sandbar shark, Ginger. | A. Reitsma. Aquarium of the Pacific 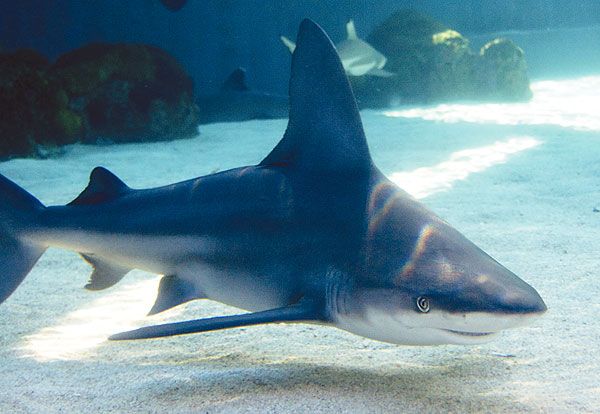 Another view of Ginger

A. Reitsma. Aquarium of the Pacific

Although occasionally found in pelagic (ocean) waters, the sandbar sharks tend to prefer relatively shallow coastal waters of the continental shelf, islands, bays, harbors, and estuaries where there are sandy and muddy bottoms. They avoid fresh water. Although they frequent shallow waters, they are rarely seen at the surface, apparently preferring to stay in the lower part of the water column.

The sandbar shark is a medium sized, classically shaped, full-bodied shark with large dorsal and pectoral fins and sturdy tail that give the impression that this is an all business animal. Its snout is bluntly rounded and is shorter than its mouth is wide.

Upper body surfaces may vary in shade from a dark gray to bronze or brown color with lighter shading on the sides that lightens to white on the underside. Aside from rather dark shading of the tips on the dorsal and caudal fins there are no distinctive markings or color patterns.

The sandbar shark is an opportunistic feeder that takes food around the clock, but is more active at night than during the day. Its food preferences cover a broad range of prey including a variety of small bony and cartilaginous fishes, octopus and squid, some hard-shelled mollusks, and shrimp and crabs. Feeding studies indicate that these sharks are very successful with their hunting and feeding techniques and may on average receive a more consistently generous diet than many of their near relatives.

Males of this species reach sexual maturity at lengths of 130 to 180 cm (4-5.5 ft), females from 145 to 180 cm (4.5-5.5). Breeding takes place in the northern hemisphere in the early summer, but not until late fall to early winter in the southern hemisphere.

Apparently a mature male will select a female for mating and will follow her, sometimes nipping or biting her between the dorsal fins or in the region of the gill slits or the pectoral fins until she rolls over and permits the breeding to take place. The biting wounds may be serious enough to form permanent scars.

These animals are viviparous. There is a placental connection between the embryo and its mother and the young are live born. Gestation varies some with geographical location but is most commonly from eight to twelve months. The number of pups varies from six to thirteen and litter size is dependent on the size of the mother. The larger the mother, the more pups she will deliver. Typically the mother will select a near shore, shallow water area where she will give birth and where the pups are likely to stay in a nursery setting until they gain the confidence required to seek deeper waters. The ratio of males and females is almost always 1:1. The mother leaves the nursery area shortly after she gives birth and doesn’t offer any assistance or care to her new offspring.

Juvenile sandbar sharks stay in their nursery grounds until the late fall months when they congregate in schools and move into deeper waters where they stay until the following summer when they return to shallow waters. This seasonal movement between shallow and deep waters may continue for up to about five years. This behavior is an important reason why programs establishing essential habitat for this species need to designate several different habitats for protection so as to maintain the connectivity of the the shark’s life cycle.

Adults also have migratory patterns. They are classified as highly migratory species. Their movements appear to be stimulated by water temperature changes, but some long distance migrations are attributed to the influence of ocean currents. Males tend to school during their migratory travels whereas females more commonly travel alone. It is believed that migration occurs in deeper water than these fish normally occupy.

These sharks tend to spend most of their time near the bottom of the water column on an almost continuous search for food.

As is true with most sharks, this species is well adapted to its way of life. Excellent eyesight, even in relatively dark waters, extremely sensitive olfactory abilities, sensitivity to vibrations, and ability to detect micro electrical fields generated by other animals make these animals superb predators.

These sharks are believed to live more than 30 years.

Although sandbar sharks are listed by the IUCN Red List as only Lower Risk/near threatened, they are severely overfished in the western North Atlantic. Since 2008 NOAA’s Fisheries Service Highly Migratory Species Division has required that any sandbar shark caught in state or federal waters must be immediately released with minimum injury and without removing it from the water (gaffs cannot be used). This control appears to be easing some pressure on populations in US waters.

These sharks are caught with longlines, hook-and-line, and set bottom nets and also fished with rod and reel by sports anglers as a game fish because of its gritty fighting abilities.They are utilized fresh, fresh-frozen, smoked, and dried salted for human consumption; the hides are prized for leather and other products; the fins are prepared as the base for shark-fin soup; and the liver is extracted for vitamin-rich oil.

Newly born and juvenile sandbar sharks are subject to predation by larger fish, including other sharks, especially the bull shark. Although there have been reports of tiger sharks preying on adult sandbars, it appears that adults have few problems with predators other than humans.

Sandbar sharks are found in warm waters around the world, but the Hawaiian island of Oahu is one of the few places in the world where there is an operation that takes visitors out to snorkel with sandbar sharks from the safety of a cage. An ecotourism business in Bonchuk Bay in Gökova,Turkey gives tourists opportunities to safely watch sandbar sharks during the breeding season.

One of the world’s largest coastal sharks, sandbar sharks are the most common species swimming along the U.S. Atlantic coast. Their genus name Carcharhinus, which is of Greek derivation, translates to ‘sharpened nose of lead’ and although rounded horizontally, their profile is, indeed, sharp. The sandbar part of their common name comes from their preference for sandy bottoms of the ocean. They are also called brown sharks. Identifying characteristics include a relatively heavy body, a short rounded snout, large dorsal and pectoral fins, and a graceful swimming pattern. These sharks have been reported to be involved in some attacks on humans, but they are not generally considered dangerous.