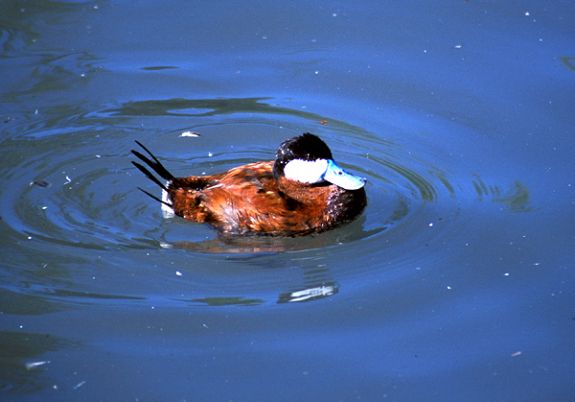 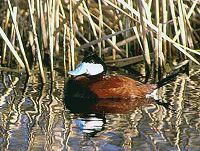 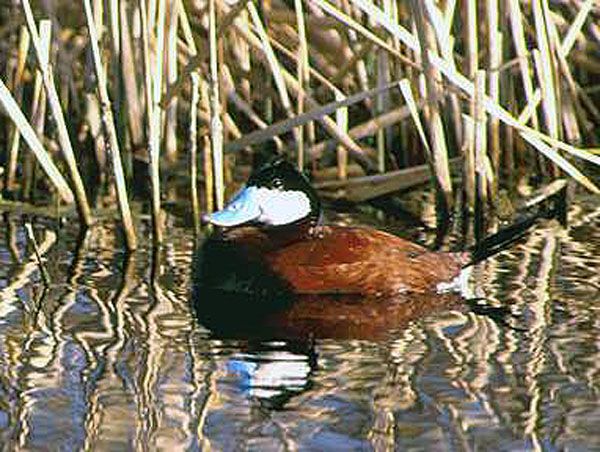 Our ruddy ducks are fed a waterfowl pellet food supplemented with mealworms, bloodworms, krill, mussels, and romaine lettuce. They live in the Shorebird Sanctuary exhibit outdoors on the second floor.

They are found in permanent fresh water or alkaline marshes. These ducks require areas that have open water as well as vegetative cover for protection during nesting. They breed in freshwater marshes and ponds. Freshwater is needed for the hatchings whose salt glands are poorly developed. The prairie potholes located in the Great Plains are favored areas. Winter shelters are shallow protected saltwater bays and estuaries along the coasts.

Ruddy Ducks have a small, compact, chunky body with a characteristically vertically held tail and a proportionally large head and bill.

In the winter, both male and female birds have similar appearances. They are gray/brown with a dark cap, white breasts lightly barred with brown, white bellies, feet that are large, gray, and webbed, and a gray concave bill. In the spring the male’s bill changes to a blue-gray color and his plumage also changes. He develops a red-brown or cinnamon colored chest, rump, and flank and conspicuous white cheeks. Females have a horizontal brown streak through their white cheeks and a less heavy bill.

They are primarily herbivores with about 75 percent of their diet some form of plants. Their food preferences vary by age, season, and location, and are influenced by nutritional demands for breeding, molting and feather growth, and migration. They feed on roots, underground tubers, green herbaceous foliage, and seeds of aquatic plants, seagrasses, and pondweeds. They also eat zooplankton, clams, snails, mollusks, brine shrimp, and insects, especially midge larvae. Midges are the bulk of their insect diet.

They forage almost exclusively by diving but occasionally will skim the water’s surface of the water, straining food items from it.

Breeding of these ducks was once confined to the prairie states, but it is now more widespread to Manitoba, Canada and the Great Plains.

Ruddy Ducks pairs are usually seasonally monogamous. Reproduction begins with an elaborate display by the male in front of the female. The male will swim by her several times with his tail that is usually at a 45° angle raised to 90°. He puffs out his chest, bows, and slaps his bill against his chest to produce a drumming sound and to also create bubbles that rise from beneath his chest.

The female builds a basket-like nest from surrounding marsh plants about 20 cm (8 in) above shallow water. Material is not carried to the nest; the female reaches out and pulls it under her. She firmly attaches the nest to growing reeds, often arching the reeds over the nest to conceal it. She lines the nest with down. Usually 6 to 10 eggs that are white or a cream color and about 62 mm (2.5 in) long are laid. The incubation period is about 23 days. During the incubation the female imprints on the embryos by making low calls.

The dense whitish down of the new hatchling both traps air to make it more buoyant and serves as an excellent insulator. The precocious chicks are able to dive skillfully when only two days old. They begin to develop feathers at about two weeks of age and fledge 42 to 49 days after hatching.

Ruddy Ducks usually do not start their migrations to warmer habitats as long as food is available in their breeding areas and there is open water that is ice-free. The northward migration of these ducks to breeding areas usually occurs from February into April and the southern from cold to warmer areas from September through October annually. Migration usually occurs at night and large flocks of several hundred birds may travel together.

They have a difficult time getting air-borne. They seem to ‘run’ on the water using their broad webbed feet for several yards, always positioning their takeoff against the wind. Once in the air Ruddy Ducks are swift flyers. The rapid strokes of their small wings produce a whirring sound. On land they walk very awkwardly because of the far back placement of their legs so they prefer to escape danger by diving deep and swimming away from it instead of taking to the air.

These ducks are highly adapted for their aquatic lifestyle. They are excellent underwater swimmers due to the shape of the body, small wings, feet located at the extreme rear, and the stiff tail that makes a good rudder. Their feet are among the largest feet in relation to body size of all ducks. They dive obliquely using leg stokes, not their wings, to propel themselves downward. Ruddy ducks can disappear from sight without diving. Resting on the surface of the water, they can slowly sink under without causing a ripple in the water.

Molting to change to breeding (alternate or summer) plumage or non-breeding (basic or winter) plumage occurs twice a year. Nutritional demands are high during this time and the ducks seek habitat that will provide an adequate source of food and cover to hide them from predators. They cannot fly during the five weeks of molting because of loss of their flight feathers.

Ruddy Ducks are protected in North America under the Migratory Bird Treaty Act. In contrast in England where this species was introduced from the United States, they are considered to be an invasive species. Known as the ‘pushy American duck”, they are now being eradicated.

Some of the introduced birds escaped from captivity in 1940, bred successfully in the wild, and naturalized. Then they migrated to Spain where the former American ducks out-competed the male White-headed Ducks, (Oxyura leucocephala), an endangered European species. Successful mating has resulted in hybrids that, unlike many hybrids, are fully fertile. Pairs of wandering Ruddy Ducks are more aggressive than and can out-compete White-headed Ducks for nesting sites and food.

The size of the eggs laid by female Ruddy Ducks is the largest in relation to body size of all ducks. The female lays a clutch of one a day and the weight of the total number laid often exceeds her body weight.

Ruddy Ducks are diving ducks that belong to the family of stiff-tailed ducks, named for their stiff tail that acts like a rudder. The ruddy part of their common name comes from the rust-red breeding plumage of the male. They are native to North America where they are wide-spread and common. Very awkward on land, they spend almost all of their time in shallow water at the edge of wetlands where there is an abundance of vegetation to hide in.