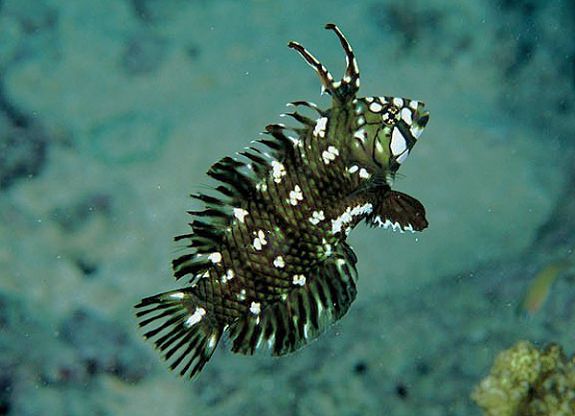 Who gets to eat the mussels, the rockmover wrasse or spiny lobster? The wrasse certainly tries to steal the lobsters’ dinner but is seldom successful. It’s more difficult to tangle with a lobster than it is to move a rock to find food.

Hawaii south to central Polynesia, west to Micronesia and Melanesia, through the East Indies and across the Indian Ocean to the coast of Africa.

Adult fish live on shallow semi-exposed reef flats and in lagoons and seaward reefs to depths of 14 to 25 m (46 to 82 ft). They prefer hard-bottomed grassy areas of mixed sand and rubble where there is exposure to a mild surge. Juveniles favor shallow areas on rubble among large patch reefs or protected open patches on reef crests.

Rockmover wrasses have an oblong compressed body and a wedge-shaped head. Except for two scales on the upper part of the gill coverings and an almost vertical row of small scales behind each eye. their head is scaleless. In juveniles the first two dorsal fin spines are long and extended, drooping over the fish’s forehead to form a “cowlick”. As the fish mature, the elongated rays are lost.

Adult fish have a dark greenish-brown body with an elongated white spot on each scale. Their head is a gray-blue with brown lines radiated from their eyes. There are two black spots in front of the dorsal fin and a wide vertical white bar on base of the caudal fin. The posterior part of their caudal fin and pelvic fins are black. Juveniles found in Hawaii are usually green and those in the western Pacific are burgundy to brownish. Both are spotted in white.

Rockmover wrasses are opportunistic, feeding on a wide variety of bottom dwelling animals usually hidden under rocks, such as worms, snails, crabs, and brittle stars. Both juvenile and adult rockmover wrasses overturn coral fragments and rubble to expose target prey.

Although little is known about reproduction of these fish, it is believed that, like other wrasses, they probably are able to change sex and are pelagic spawners, broadcasting eggs and sperm into the water column.

These fish are highly territorial. Large adults, usually in pairs, move over “their” large section of a reef. One fish turns or shifts large pieces of debris or rubble grabbing or pulling it with its mouth or pushing it with its snout. When the working member of the pair has revealed the prey, the other fish quickly grabs and eats it. Juveniles do not usually work in pairs, doing all the work themselves.

Facing danger, these wrasses quickly dive into the sand for protection. Juveniles resemble algae and mimic the movements of detached, drifting seaweed by swaying back and forth in the currents.

Japanese researchers observed rockmover wrasses using coral fragments for mound construction. The wrasses heaped 4 to 70 pieces of fragments on each sand mount, diving into the mount just before sunset. It appeared that they returned to their own mount repeatedly.

Rockmover wrasses are not on the IUCN Red List. They are market fish but with only minor commercial value. There is a small demand in the aquarium trade.

Although called rockmover wrasses, these fish do not move rocks. They move rubble and coral fragments.

This wrasse has a number of common names: rockmover, dragon, and reindeer. Rockmover comes from the behavior in which they move coral fragments and rubble to find prey. Reindeer and dragon describe the first two dorsal fin spines of juveniles that are elongated.