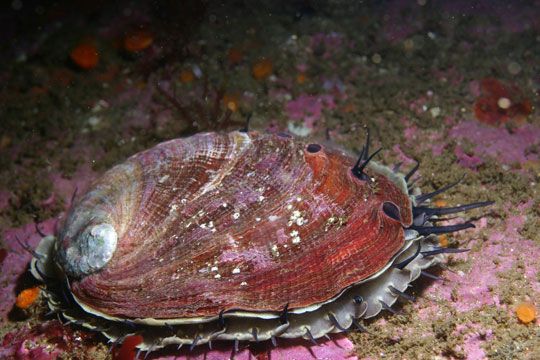 The coloration, open pores, epopodium, and irs sensory tentacles are visible in this image. | Courtesy of NOAA

Red abalone can be found in in the Aquarium’s Southern California/Baja gallery, Northern Pacific gallery, and in our education classrooms. Some of the abalone were provided by the California Department of Fish and Wildlife, and others are the result of successful captive breeding efforts carried out by our aquarists. Just as is their diet in the wild, we feed our abalone kelp and other types of marine algae.

Red abalone inhabit the rocky shores of bays, rocky tide pools, and kelp forests. In Northern and Central California they are found in intertidal and shallow subtidal waters; whereas in Southern California, they inhabit only subtidal areas and then only in locations where there is upwelling of cooler water. These areas are located along the mainland and the northwestern Channel Islands.

A single shell covers the body and organs of an abalone. The shape of the large thick shell of a red abalone varies depending on the structure of the rock crevice or crack in which the abalone grew. It may be somewhat flat if the crevice was tight or domed if the space was large. The left side of the shell has three or four open, moderately raised respiratory holes and a number of closed pores. The shell surface is usually a dull brick red with a red rim around the rim of the shell; however, coloration may be obscured or appear to be pinkish due to growth of algae on the shell surface.

The abalone foot, a strong, broad, and flat muscle, takes up most of the interior of the shell. Its surface is black and the sole is yellowish. There is an interior scalloped fold of tissue at the edge of the foot, (the epopodium, that contains black sensory tentacles at its edge. The epopodium may protrude from the shell. A thin mantle of tissue next to the shell hangs from the edge of the muscle attachment cover the body.

As the abalone grows, the edge of the mantle adds new material to the outer rim of the shell, which increases the diameter of the shell, and new layers to the inside, increasing the thickness of the shell.

Shell formation begins in the larval stage and continues into the adult phase. Growth depends on food supply, so it is highly variable. Yearly growth is believed to be greater in Southern than in Northern California, where food is less available. During El Niño events when ocean temperatures are higher, abundance of kelp decreases and shell growth in Southern California slows.

Abalone are herbivores. In Southern California older juveniles and adults’ primary diet is giant and feather boat kelp. They also eat tangle kelp. In Northern California their primary diet is bull kelp. Encrusting coralline algae and bacteria are the first foods eaten by very young abalone, those in the post-larval settlement stage. They usually graze on the diatoms that occur on the algae. When about 5 centimeters (2 inches) long, the juvenile abalone begin to feed on drifting kelp.

Red abalone usually reach sexual maturity at a shell length of 13 centimeters (5 inches); however, females may become mature when as small as 4 centimeters (1.6 inches) and males at 8.1 centimeters (3.3 inches). Broadcast spawning occurs as eggs and sperm are flushed out into the water through the pores in the abalone shells. At first spawning a young female broadcasts only a few thousand eggs; whereas a large adult spawns as many as six million eggs. In Northern California spawning is seasonal from April to July, peaking in May, reflecting the seasonal availability of kelp. In Southern California spawning may occur year round. In all locations when one abalone starts to spawn, it usually triggers spawning of others in the aggregation, an occurrence that causes more opportunities for fertilization to take place. A minimum density of spawners that are no more than 1.5 meters (5 feet) apart is essential for successful broadcast spawning.

Fertilized eggs (zygotes) sink to the seafloor, where they hatch into planktonic microscopic larvae in about 24 hours. The veligers are free-swimming, using cilia to move up in the water column where they remain for several days to a week before starting to search for a suitable substrate to which to attach, usually small spaces between rocks or under boulders. When settlement occurs, swimming stops and growth into an adult abalone begins.

Abalone “breathe” through their respiratory pores. Their gill chambers are under the pores. Water drawn in under the edge of the shell flows over the gills and out the pores. The pores are also the exit for waste, eggs, and sperm which are carried out in the water flow.

When an abalone is disturbed it pulls in its foot, mantle, and surrounding epopodium and uses its strong foot to clamp its shell down. In this attached position, the strength of the muscle makes it extremely difficult to detach the abalone.

Abalone harvesting in California has a centuries-old, multi-ethnic history that started with Native Americans, continued with Chinese-Americans, followed by Japanese-Americans, and finally today’s diverse harvesters. Abundant about 30 years ago, abalone once supported thriving commercial and sport fisheries. Regulation of commercial take began in 1900 and recreational take in 1997. Today, due to overfishing, disease, low population densities for reproduction, predation by sea otters and other marine animals, especially of juvenile abalone, and illegal poaching, abalone are in trouble, with some species facing extinction. Two of the eight species found in California, white and black, are listed as endangered. Two species, pinto and green, are listed as species of concern. Commercial fishing of all species is prohibited, with recreational take limited to red abalone only by free divers and rock pickers, and only north of San Francisco Bay. Use of SCUBA gear is prohibited. In addition the CDFW also regulates season and time of day harvesting is allowed, size, number harvested each day, the total harvested yearly, and the type of tools used to dislodge the abalone.

An Abalone Recovery and Management Plan (ARMP) was adopted in 2005 by the California Fish and Game Commission to manage the recreational fishery in Northern California and aid in the recovery of the depleted abalone populations in the rest of the state.

Farming of red abalone is currently (2015) being done at three aquaculture farms on the central California coast. The adult abalone are fed giant kelp obtained from kelp beds leased from the CDFW, which also regulates harvesting of the kelp. “Baby” abalone are fed coralline algae grown by the farm operators. All are sustainably operated. The Aquarium of the Pacific’s Seafood for the Future recommends red abalone as responsible seafood choice.

Whether the shape of a red abalone’s shell is rounded or flat is largely due to where whether its habitat as it grows into an adult is a thin crack in a rocky crevice, in areas where there are strong currents, or in more open rocky areas where there is little current. It is more difficult for a highly rounded shell to stay attacked to a rocky surface-strong current habitat so the abalone usually forms a flat shell that presents a low profile to the currents. In contrast, in open areas with little current the tendency is to grow highly rounded shells.

Red abalone shells are abundant in Chumash middens (refuse deposits) in the northern Channel Islands dated about 7500-3300 years ago. Abalone were a Chumash food item and the shells were used to make jewelry and the circular hooks used in fishing.

Red abalone are one-shell gastropod marine mollusks related to snails and sea slugs. They are the largest and most common of the eight species of abalone found in California waters (red, green, black, white, pinto, pink, flat, and threaded abalone). Commercial abalone fisheries once thrived in California, but today abalone populations have decreased markedly. Only red abalone may be harvested in the state and then, only north of San Francisco Bay. In addition commercial fishing is prohibited with collection allowed only by recreational free divers and rock pickers (those who harvest the abalone from rocky areas such as tidepools at low tide).