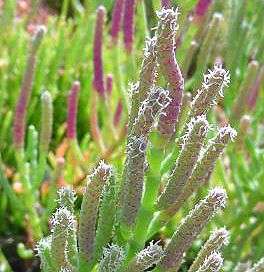 Our plants, which grow in the Shorebird Sanctuary, were donated by the Stewards of the Los Cerritos Wetlands located in Long Beach, California.

Pacific coast from south Alaska to Baja California, Atlantic coast from New England to Florida, and the Gulf coast.

This plant typically grows in the low to middle tide zones of saltmarshes or salt flats, often covered with water. It requires clear water and large quantities of sunlight to survive. It can also grow in extremely salty soil so it is sometimes found in beach where there is moisture.

Pickleweed is a very common, somewhat shrubby, succulent, perennial plant that is usually a gray-green. It is low-growing, only 30 to 90 cm (11.8 to 35.4 in) in height. The central stem has segments in an opposite branching pattern. The segments turn red just before they drop off. New green growth occurs during the rainy winter season. At first glance the plant does not seem to have any flowers or leaves; however, both are hidden in the joints of the stems. The tiny flowers are 6.4 mm (0.25 in) tall and a creamy color. Occasionally, the stems grow so closely together that the plant almost looks bushy.

An important note. Some botanists believe that the stems of pickleweed plants are actually greatly modified leaves.

Pickleweed obtains its nutrients through photosynthesis.

Flowering occurs from August to November. Male and female sex organs are on separate flowers and pollen is carried from the male plant to the female by the wind. The seeds formed after fertilization are dispersed by the tides or rain. Tiny hair-like structures on the seeds act like Velcro™ giving the seeds the ability to trap air bubbles so they float or attach to floating debris to be deposited somewhere on the surface of the soil where germination will take place.

This plant handles salt in two ways—as a salt excluder and a salt accumulator. Some salt is filtered out at the roots by sodium-potassium pumps in the plant’s cell membranes. Excess salt is pumped by other cells to vacuoles (storage cells) at the tips of the plant’s jointed segments. When the vacuoles are full and cannot hold any more salt, the cells break down and die, and the segment turns red and falls off. In the fall a meadow of pickleweed can be a red blaze of color.

Pickleweed is important to the survival of several saltmarsh residents. It is food for both birds and mammals. It is the primary habitat for the endangered saltmarsh harvest mouse. Belding’s Savannah Sparrows, (Passerculus sandwichensis beldingi), are a California state protected bird and a candidate for federal protection under the Endangered Species Act. These non-migratory birds are local year-round residents of Los Cerritos Wetlands, the Bolsa Chica Ecological Reserve, and the Seal Beach National Wildlife Refuge where they stake out a territory and build nests above the highest tide line to avoid flooded. The nest material consists of pickleweed and twigs. Some species of migratory ducks eat pickleweed seeds.

Saltmarsh dodder, (Cuscuta salina), a holoparasite, seeks out pickleweed especially for a host. Dodder usually only stunts the growth of the pickleweed but heavy infestations can block out the sunlight that pickleweed needs to photosynthesize.

The Chumash and the Tongva-Gabrielino Native Americans used the ashes of pickleweed in the production of soap and glass and the stems of the plants for seasoning and as a vegetable.

In the summer pickleweed (sea asparagus) is harvested for its tender green tips. The tips are used fresh in salads, steamed to serve as a vegetable, or pickled.

Pickleweed species belong to the Goosefoot family (Chenopodiaceae) which includes sugar beets and spinach. Salicornia virginica is a California native species of pickleweed. It has many common names including turtleweed, glasswort, saltwort, Virginia pickleweed, sampfire, and sea asparagus. The name ‘pickleweed’ comes from the pickle-like appearance of its stem segments and its salty taste. It is a halophyte commonly found in estuaries and bays where there is protection from wave action. It is often said that pickleweed can survive under conditions that no other salt tolerant plant is able to.