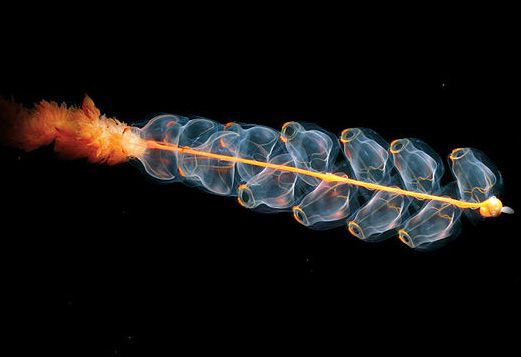 This pelagic siphonophore has a typical siphonophore body, a long, thin, hollow stem to which the colony of zooids is attached. A gas-filled float, called a pneumatophore, is attached to the front end of the stem. Behind it in a region called the nectosome, are medusae specialized for locomotion. These medusae are called nectophores. Behind the nectophores is an area called the siphosome which has all of the remaining zooids of the colony. Feeding polyps, each with a single tentacle nourish the entire colony. Other zooids are responsible for reproduction. Scientists believe that another type of polyps called palpons may be responsible for waste removal and possibly for defense although these functions have never been observed. The different types of zooids in the siphosome are arranged in a repetitive pattern on each side of the stem that is specific for the species. For example, M. orthocanna’s pattern is different that of all other pelagic siphonophore species.

1.8-2 m (6-7 ft) in length
Early in development two growth zones form on the young stem where the stem will elongate and new zooids form. Nectaphores form at the zone near the pneumatophore. The second growth zone is just below the oldest nectaphore. The zooids of the siphosome that carry out functions other than locomotion are formed here. As the stem elongates, new growth in both zones is carried downward.

M. orthocanna moves forward intermittently. It pauses to put out its “fishing” curtain of tentacles in front of the body stem of the siphonophore to ensnare passing prey. Each polyp has a single tentacle that is 30 to 50 cm (11.8 to 20 in) long. On contact stinging cells (nematocysts) shoot “harpoons” of toxin into the victim that paralyze and even kill it. The meal is then transferred to the canals that carry it to the entire colony.

All siphonophores are predatory carnivores. This species is believed to feed on copepods, and other small crustaceans such as decapods, krill, and mysids. Small fish may also be eaten.

Like most siphonophores, the pelagic siphonophore is an active swimmer. When its bell-shaped nectphoes contract, water is expelled causing the colony to move. The contractions of the medusa are coordinated which enables the animal to swim forwards, sideward, or backwards.

In spite of having a fragile gelatinous body, M. orthocanna has adapted to its harsh environment’s cold, extreme pressure and lack of food. This voracious predator capitalizes on its agile swimming ability and curtain of tentacles spreading widely to capture prey.

Pelagic siphonophores have not been evaluated for conservation status. Deep sea dwellers, populations could be impacted by increasing pressures to mine the deep sea and to harvest marine life for seafood by deep sea trawling. Siphonophores could be caught as bycatch.

During World War II, submarine operators found that they could hide the submarine from the enemy’s sonar under large groups of siphonophores. The sonar waves were scattered by the soft bodies if the siphonophores.

Marrus orthocanna is one of several deep sea siphonophores that have the same common name, pelagic siphonophore. Deep sea ocean explorers in manned submersibles have viewed this species at depths as deep as 2000 meters (6600 feet).

Like other siphonophores M. orthocanna is a colony of specialized individuals known as zooids that have different functions such as locomotion, capturing prey, waste removal, and reproduction. No matter what the function, all the zooids attached to the stem of a siphonophore are descended from one fertilized egg so all are genetically identical.