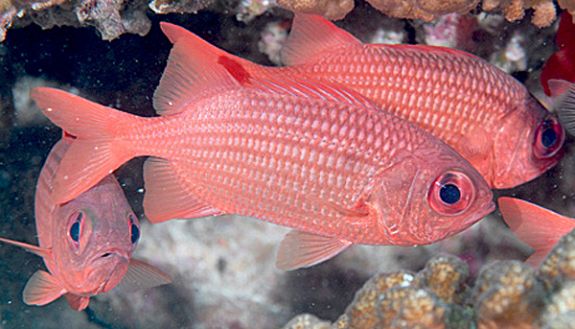 Central west coast of Baja California to the Gulf of California, south to Equador. Also in the Revillagigedos, Cocos, Malpelo, Clipperton, and Galapagos Islands.

Perch-like in form this laterally compressed fish has a single dorsal fin and a forked caudal fin notched to about half its length. It has a rounded snout and large eyes.

The scales have a base color of red, with darker margins that give the impression of mildly irregular but distinct horizontal lines. The scales are ctenoid, having small, backward pointing spines on the distal margins. The term ctenoid comes from the Greek ‘cteno’, meaning comb. The spines are short, but sharp, and give the fish a rough, prickly, coarse sandpapery feeling.

They emerge from reef crevices, holes, and small caves at night to cruise the reef, often in small aggregations, looking for a meal of primarily crustaceans and large zooplankton.

Specific information is rather meager about reproductive activity in this species. Some Myripristis species have been seen spawning in open water a few days after the full moon. Eggs float until hatching into larvae that are planktonic for several weeks before they settle out to develop into juveniles.

These fish are nocturnal and spend the night hours feeding, often near the water surface. During the day they find safe cover in holes, small caves, and under overhangs. When active they may be seen solitary, in small aggregations, or sometimes in large, well-organized schools.

This species is subject to predation in all phases of its lifespan. Plankton feeders prey on their eggs and larvae for a food source and both juveniles and adults are prey for larger fish and other marine animals.

Although small, Panamic soldierfish are considered a good food fish. They are easily caught and are commonly the target of subsistence fishers. They are offered for sale fresh in some fish markets. Because of their availability, reasonable cost, and hardiness, they have become quite popular with home aquarists.

In areas of human activities these fish, like many other inshore species, commonly face loss of habitat. A popular food fish they may also be subject to overfishing. At the present time this species is not listed by CITES or the IUCN Red List.

Panamic soldierfishes, small, bright red, big-eyed fish, are fairly common reef inhabitants in their distribution range. Panamic, a part of the common name of this species, means that these fish are found in a geographic province of the eastern Pacific encompassing central Baja California to northern Peru. The second part of their common name comes from the swimming behavior of soldierfishes. They are frequently seen swimming in nicely organized schools that are said to resemble military formations.