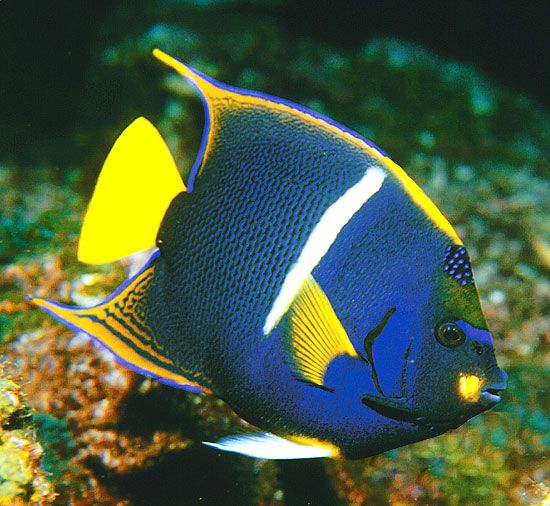 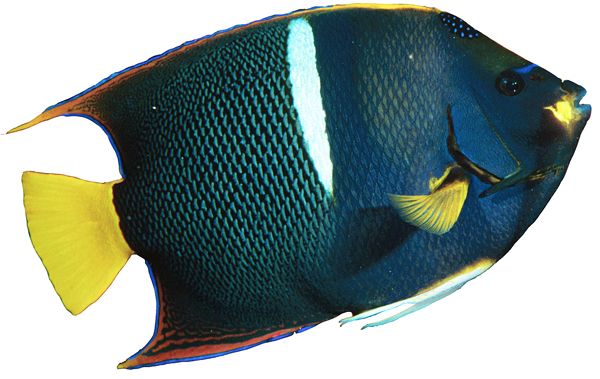 The king angelfish prefers a rocky or coral reef habitat. They may be found in all levels of the water column to a depth of about 30 m (98.4 ft) and have been reported to a depth of 80 m (262 ft). Juveniles are frequently found in tidepools.

Juveniles are more colorful than adults with several blue vertical stripes on the side of the body behind the white stripe and yellow to orange markings on the head. The forward one/fourth of the body is yellowish to orange.

These fish are omnivorous and feed on a large variety of animal and plant life including algae and other types of seaweed, tunicates, an assortment of worms, sea stars, including brittle stars, sea urchins, and a variety of small mollusks. Their favorite food appears to be sponges.

The king angelfish is an open water egg scatterer. Research on the gonadal activity of the species indicates that the reproductive season is summer through fall, apparently peaking in the late summer. Timing may vary some depending upon geographic location.

The actual spawning is accomplished over sand bottoms near a reef at about sunset, preceded by a ritual in which both a male and a female participate. Males appear first, and in a flurry of activity, including chasing and rapid swimming, create temporary spawning areas, ending up with the larger fish on the perimeter of small groups. Several minutes later the females appear near the bottom singly or in small groups. When a female approaches a male he will swim toward and above her and display by spreading his white pelvic fins, creating a fluttering movement of his body while swimming back and forth in front of her. When she is ready to spawn she will swim a diagonal path to the surface followed by the still fluttering male until they reach the surface where they release eggs and sperm. Eggs and larvae are pelagic. Juveniles may be seen in the fall and winter.

Kings may be seen singly, in pairs, or sometimes in fairly large schools. In areas of low species population the females tend to be quite aggressive and will pursue the formation of long-term pair relationships. Where the species is abundant the females are mostly solitary and strongly territorial, vigorously defending their home turf from other females. Males, on the other hand, swim freely over large areas encompassing territories of established females. Juveniles are sometimes seen in tidepools.

They are diurnal and spend most of their waking time grazing on reef structures. At night they seek shelter in the irregularities of reef formations.It is not unusual to see this species associating with the Cortez angelfish, Pomacanthus zonipectus.

It is common to find juveniles of this species acting as cleaner fishes feeding on ectoparasites of hammerhead sharks, manta rays, and other large fishes.

It is reported that king angelfish may have a life span of up to about 15 years.

King angelfish have the same conservation issues that other similar fishes have. Eggs, larval forms, juveniles, and adults are all subject to predation by larger fishes and other marine animals.

These fish are not considered sport or food fish. Their beauty adds to the lure of ecotourism that helps protect them in some areas. They are much coveted by aquarists because of their bright colors and generally hardy health, but are not always readily available and usually demand a high price.

Not listed by CITES or the IUCN Red List.

This species has been seen feeding on the feces of Chromis atrilobata, the scissortail damselfish.

The king angelfish is a beautifully colored, reef associated fish, found in the east Pacific Ocean and the Gulf of California in tropical and some subtropical areas. It is an omnivore, feeding on a large variety of small plants and animals, including planktonic forms. Its favorite food consists of sponges. Females may be very territorial and more aggressive than males and initiate formation of monogamous bonds