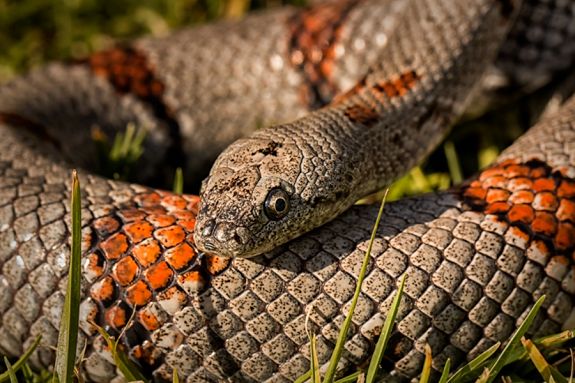 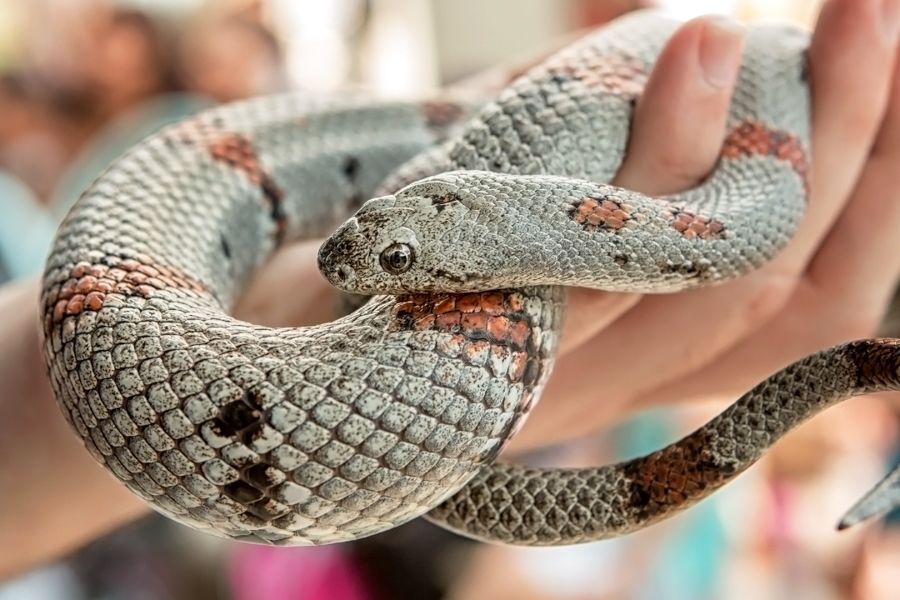 The gray-banded kingsnake is one of the Aquarium’s animal ambassadors brought out periodically for meet-and-greet sessions.

This species is found in Southern New Mexico, northern Mexico, and the Trans-Pecos/Chihuahuan Desert area of southwestern Texas.

The gray-banded kingsnake is a medium-sized snake averaging 3 feet (91 cm) in length. It has a rather wide head compared to other kingsnake species and two large, protruding eyes with round pupils. There are two main color morphs: “blairi” has wide red-orange banding, and “alterna” has thinner orange-red banding. Both have a gray background with black and/or white accenting. Many variations from these basic morphs have been found in both captive and wild specimens, with some lacking the red or range banding completely.

This snake feeds mainly on lizards. It will also feed on frogs, small rodents, other snakes, and eggs of ground-nesting birds.

Gray-banded kingsnakes exhibit little sexual dimorphism. They breed after winter hibernation. The breeding process typically takes about thirty days to produce eggs. The female usually lays between four to thirteen eggs which will hatch in approximately nine weeks. Hatchlings range from 7 to 12 inches (18 to 30 cm) in length.

This secretive, nocturnal snake is rarely seen by humans due to its nocturnal nature and often inaccessible habitats. They have a non-aggressive, docile demeanor.

Also known as the Davis mountain kingsnake, this snake is brightly colored with orange or red-orange bands on a gray background with white or black accents. It is non-venomous and docile. This species is endemic to the southwestern United States and northern Mexico. It lives in usually inaccessible arid, hot, rocky, mountainous areas. The International Union for Conservation of Nature (IUCN) lists them as a species of Least Concern.