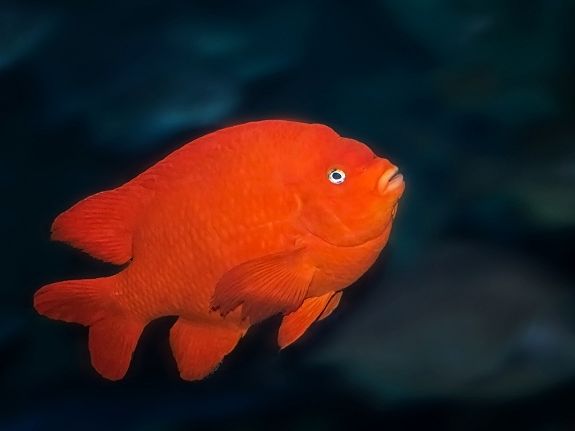 We have a special permit issued by the California Department of Fish and Game to keep garibaldi, a protected fish in California. Their diet in our protected environment is a mixture of krill, fish, squid, and clams. Garibaldi can be seen in the Honda Blue Cavern and Amber Forest exhibits.

Garibaldi typically inhabit rocky reefs and kelp beds on exposed coastal shores and semi-exposed shallow bays, frequently close to the shoreline. They are found as deep as 30 m (95 ft) but most are found in water under 14 m (about 45 ft). In the Channel Islands they are commonly found in water less than 4.5 m (15 ft) deep.

Garibaldi have a deep, oval-shaped, and laterally compressed body covered with large scales. The caudal fin is deeply notched and the upper and lower lobes are large and rounded. They have a small mouth, large lips, and a steeply sloping head.

Adults of both sexes are a vivid, bright golden-orange. Juveniles, more red-orange in background color, have iridescent blue spots on their body, a brilliant blue large blotch outlined in black on the upper mid-back, and fins outlined in blue. The fin outlines and the blotch disappear when juveniles are about 5 cm (2 in) long. The blue markings remain during an intermediate stage until the fish are 15 cm (6 in) in length.

Carnivores, these fish feed during the day on a diet of primarily bottom-dwelling invertebrates including worms, small anemones, sponges, bryozoans, crabs, shrimps, small shellfish, and sea stars. Given the opportunity, females eat their own eggs.

Garibaldi become sexually mature at five to six years of age, when they are about 20.3 to 22.8 cm (8-9 in) in length. The male garibaldi is the nest builder and care-giver. In the early spring, he begins to establish a spawning area in his home territory that may be as large as 3-4.5m2 (10 to 15 ft2) and contain as many as three species of red algae. He continuously grooms, cleans, and carries away small animals, unwanted species of algae, and any detritus that might contaminate or interfere with the growth of the desired red algae species. Preparing the nesting site takes as long as one month.

Spawning season is from March through July, and several spawning cycles may occur over the season. When the male fish is ready to accept eggs he will approach females and attempt to entice them to his nesting site with a loud clucking sound and a dash to the nest. Females are very selective. They inspect the nest and the freshness of the eggs already deposited (indicated by the color). If the nest, egg color, and the male meet her approval, she will lay 15,000 to 80,000 bright yellow eggs that are then fertilized by the male. He immediately drives the female from the nest to prevent her from eating the eggs. Several females may deposit eggs in the same nest and a female may deposit eggs in several different nests.

The male carefully grooms and fans the eggs, but he also from time to time eats a batch just when they are getting ready to hatch. Researchers have determined that the egg eating of the males is done to entice more females in lay eggs in his nest. Females prefer to lay eggs next to other batches of fresh yellowish-colored eggs. The dark-grayish color of eggs ready to hatch is not attractive to them. The male gambles that if he has several batches of eggs in his nest, eating the darkened ones may clear the way to entice new females.

During the two to three week incubation period, the male aggressively protects the nest, often driving away intruders many times. Time of hatching is probably dependent on water temperature. The eggs hatch at night, usually in the first two hours after sunset, and the larvae disperse into the plankton population. The heaviest larval population is in southern California waters primarily within 30 miles of the shore. Young garibaldi are found in the shallows in late summer and fall.

In general, garibaldi are solitary fish. They do not school but they can sometimes be observed in disorganized aggregations a few feet above the bottom. It appears that this may be part of a breeding ritual.

The adults, especially the males, are very territorial. They select a site that will commonly include a feeding area, a protective hole to which they can retreat, and a potential nesting site. Males vigorously defend their territory year round and intruders, with few exceptions, are attacked and driven away. It appears that juveniles, with their bright blue markings, are not perceived as a threat and are generally permitted to swim freely through protected territories. The attack may be accompanied by an audible clacking noise produced when the fish rubs or hits its throat teeth together. Females establish home ranges but do not protect them with the same enthusiasm as the males.

The garibaldi’s vivid coloration may be an adaptation that serves as a warning to intruders or would-be predators that these territorial fish vigorously defend their property.

Individuals may live up to 17 years, but life span is usually about 12 years or less.

Garibaldi have several natural predators including larger fish, some sharks, seals and sea lions and, on Santa Catalina Island, Bald Eagles. They are sometimes caught on hook and line and, because of their territorial nature, are easy prey for fishermen or divers using spears. However, these fish are protected in California and it is illegal to take or hold them without a permit from the California Department of Fish and Game such as the Aquarium of the Pacific has.

The California State Legislature has designated the garibaldi as the state marine fish.

Native to the subtropical and temperate Pacific Ocean, garibaldi are the largest of the damselfishes in the family, Pomacentridae. Although most other damselfishes are found in tropical waters, the garibaldi and blacksmith inhabit the subtropical waters of southern California and Baja California’s west coast. The common name, garibaldi, may have been based on the name of the Italian patriot, Giuseppe Garibaldi, whose army wore bright red shirts, or after the “garibaldi”, a woman’s red blouse worn in the 1890’s. The bright orange coloration of the garibaldi is the most distinctive of all fishes found on the California coast and they are sometimes erroneously called goldfish.