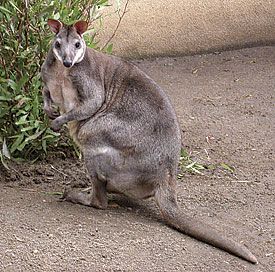 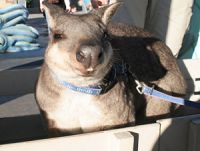 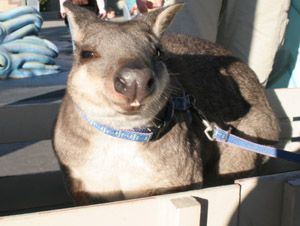 Our pademelon out for a wagon ride among our guests. Currently not on exhibit.

We no longer have any pademelons on display at the Aquarium of the Pacific.

Dusky pademelons have fur that is soft, thick, and typically gray brown to chocolate brown on the upper side of the body with a dark cheek stripe extending from behind the eye to the corner of the mouth. Above this stripe is an area of white fur. The ventral or under side of the animal including the belly, is lighter in color than the dorsal or top side. They can have prominent hip stripes. Their tail is relatively short and thick, with a sparse covering of short hair. They have dark brown, silky-feeling feet and rounded ears. Females have a fold of abdominal skin that forms a fur lined pouch.

They forage in the undergrowth of the forest, feeding during the day on grass, leaves, shoots, and fruit. Under the cover of night, they graze in clearings and at the forest’s edge, usually going only a short distance from the treeline.

Dusky pademelons reach sexual maturity at 14 to 15 months. They breed throughout the year. The male clucks softly to the female he has chosen to be his mate, producing a sound similar to that made by females when calling to their young. Fertilization is internal. The gestation period lasts for 30 days after which usually only a single, helpless, blind, and furless embryo, called a joey, is born. Immediately after birth, the joey crawls from the birth canal into the mother’s pouch where it attaches to one of four teats. It will continue to live and develop from its immature state inside the pouch until it is about six months old, when it ventures outside. The joey returns to the pouch to suckle until it is weaned between 8 and 12 months.

Pademelons are typically solitary animals that socialize primarily for mating and occasionally while grazing in clearings. They travel large distances in search of food, moving through the forest from dawn to dusk, resting between mid-morning and mid-afternoon. After dusk, they move into grassy areas to graze. They make runways or tunnels through the forest undergrowth and grasses as they move to and from grazing sites.

Dusky pademelons have been described as inoffensive and curious, even allowing observers to approach them before moving away. They thump the ground with their hind feet like rabbits do in what is presumed to be a warning signal.

In adapting to their environment, pademelons developed short tails and compact bodies that provide them with added mobility in the thick undergrowth. When not resting or feeding, they can move quickly, hopping on their hind legs with their tail held out stiffly behind.

Dusky pademelons live about 10 years in protected environments. They are believed to live between five and six years in the wild.

It is believed that predation by non-native red foxes was the primary reason for the extinction of the dusky pademelon on mainland Australia. Natural predators of pademelons include feral cats, dingoes, Wedge-tailed Eagles, red foxes, the Tasmanian devil, and Spotted-tailed Quolls. Human activities that have impacted pademelon populations include roadkill; loss of natural habitats from clearing and fragmentation of forests for management, agricultural purposes, and urban development. Hunting them in grasslands and pastures where they are considered to be pests has also decreased the populations.

The IUCN Red List currently lists dusky pademelons as vulnerable; however, the data has not be evaluated since 1996. The Australian government is taking measures to protect its red-bellied, red-necked, and red-legged pademelon populations. Establishment of parks and nature reserves is playing an important role in conservation efforts and hunting of pademelons is now prohibited.

The name, pademelon, is derived from an aboriginal or native Australian term for ‘small kangaroo from the forest’. Pademelons, petite members of the kangaroo and wallaby family, are marsupials, that is, females have an abdominal pouch.