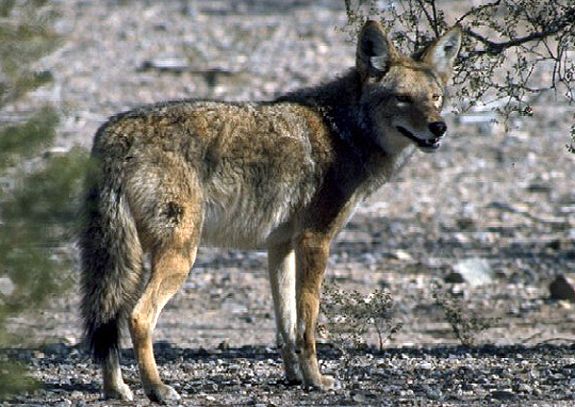 The coyote is illustrated on The Wave’s mosaic tile mural, Rios de la Vida (Rivers of Life). The fountain, mural, and accompanying graphics illustrate the story of our Los Angeles and San Gabriel Rivers. Although not on exhibit in the Aquarium, this mammal is included in our website animal database to expand on the information touched on in The Wave fountain exhibit.

Throughout all of the United States, southern and south-central Canada, Mexico and into northern Central America

Coyotes have a gray or reddish-gray coat with buff underparts, long, yellowish legs, a bushy tail, yellow eyes, and prominent ears. They are about the size of a medium collie dog, but their tail is round and bushy and is carried straight out below the level of their back. The throat and belly are light grey to white and a grey-black band runs down the mid-back. A shoulder saddle of black-tipped hairs is usually present. The tip of the tail is black.

They track their prey using their excellent sense of smell, eyesight, and hearing. They stalk like a pointer dog for 20-30 minutes, freeze, and then pounce to make the kill. These members of the dog family are opportunistic in their diet, eating just about anything. Primarily carnivores, 90 percent of their preferred diet is small mammals such as mice, voles, shrews, rabbits, hares, squirrel, and sometimes poultry. In addition they also eat insects, fruits, berries, birds, frogs, snakes, plants, and seeds. Carrion from larger animals, especially deer, is an important food source in winter. While they usually hunt alone, small livestock such as sheep, goats, and calves are usually captured as an effort of group hunting and consumed by the group.

In urban areas, coyotes are attracted to garbage, garden vegetables, and pet foods. Given the opportunity, they also prey on unattended small dogs and cats.

Coyotes reach sexual maturity at about one year of age. At the beginning of the mating season, several lone male coyotes gather and compete for one female. They may pair for life or for several years where populations are low.

The maternal den is typically a wide-mouth tunnel 1.5-9 m (5-30 ft) long, ending in a nesting chamber. The female bears one litter of three to nine pups after a gestation period of 63-65 days. The pups are born blind, but their eyes open after about two weeks and they emerge from the den a few days later. They nurse for five to seven weeks but start eating semi-solid food when about three weeks old. The female allows her mate to bring food to the pups but he is not allowed to enter the den.

The pups live and play in the den until they are 6-10 weeks old, at which time the female starts taking them out hunting in a group. The family gradually disbands, and by fall the pups are usually hunting alone. Within a year, the pups are independent.

Most coyotes live alone or in pairs, but often hunt in packs. They communicate in a variety of ways, the most well-known of which is the coyote’s howl, a high pitched, yapping, barking howl that can be heard for miles. They also communicate with snarls, barks, growls, and whines. Each sound communicates a different feeling. Coyotes also use scent communication by marking off their territorial boundaries with urine and feces to tell an intruder that another coyote is living here and it are not welcome.

One of the most adaptable animals in the world, a coyote can change its breeding habits, diet, and social habits to survive in a wide variety of habitats. There are many examples in the neighborhoods of cities where they roam through yards stealing food left out for domestic pets or preying on the pets themselves. In the Los Angeles basin they are often seen in the channelized Los Angeles River.

They have an average lifespan of 6-8 years.

In the United States, coyotes are protected in 12 states including California. In many others there are regulated seasons for trapping and hunting. Coyotes eat some agricultural pests and in some areas are protected for this reason.

The common name, coyote, comes from the word used by Mexico’s Nahuati Indians, coyoti. The scientific name literally means “barking dog”. Known as opportunistic predators, coyotes use keen hearing and an excellent sense of smell combined with their sharp eyesight to find their next meal. They avoid areas where there are wolves and extension of their range northward may be the result of settling in habitats where wolf populations have been eliminated.