Yellowtail | Ken Kurtis/Aquarium of the Pacific 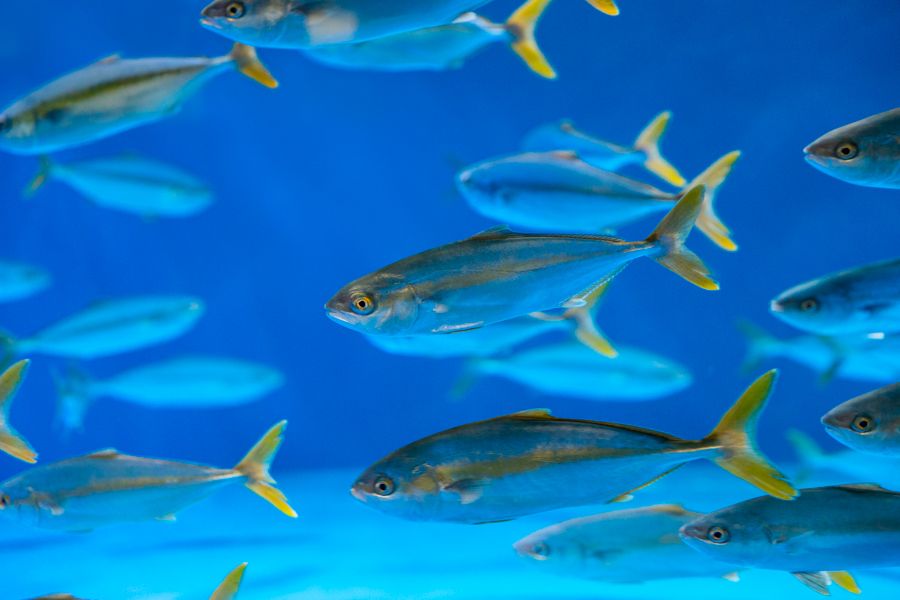 Brandi Kenney/Aquarium of the Pacific

An exhibit with a school of about one hundred California yellowtail is located in the Pacific Visions Culmination Gallery. The fish were provided by Hubbs-SeaWorld Research Institute.

This species’ range extends from Southern California to the Baja Peninsula, Mexico.

These fish are typically found over rocky reefs, around offshore islands, and within kelp forests. They prefer subtropical waters ranging from 64.4 to 75.2 degrees F (18 to 24 degrees C).

This large, fast-swimming, fusiform fish has a narrow caudal peduncle and strongly forked tail. Countershading (having darker coloration on the dorsal side and lighter shading on the ventral side) helps these fish stay hidden from predators and prey, alike. They have a dark blue dorsal color and silver sides and belly. A narrow bronze stripe next to lateral line turns yellow as it nears the caudal fin. The caudal fin and most other fins are mainly yellow.

Sexual maturity is typically reached at two to three years. California yellowtail are broadcast spawners. Spawning typically occurs in December and January if the water temperature is about 62.6 degrees F (17 degrees C).

Courtship begins thirty to ninety minutes prior to spawning. The male will place himself beneath a female with his snout touching the female’s gonoduct. The pair begins swimming erratically, with sudden bursts of speed and mid-water stalls with their bodies or snouts touching. Ten to fifteen minutes prior to spawning, the male will begin to nip the female’s abdomen, and the female begins to swim in a circular fashion while turning on her side. The female will then begin to spawn, followed closely by the male spawning. Spawning will last about twenty seconds.

This species’ lifespan ranges from five to twelve years. This fish is a highly prized gamefish, so many do not reach their maximum lifespan.

California yellowtail are listed as a species of Least Concern by the International Union for Conservation of Nature.

Native to Southern California’s coastal waters California yellowtail, a member of the jack family, are fusiform with slim bodies, a narrow caudal peduncle, and strongly forked tail. Fast swimmers, these large fish have countershading, with dark blue dorsal color and silver sides and belly. The caudal or tail fin is mostly yellow. Its lifespan ranges from five to twelve years. California yellowtail are listed as “Least Concern” by the International Union for Conservation of Nature.